Dow closes above 21,000 as stocks soar after Trump speech 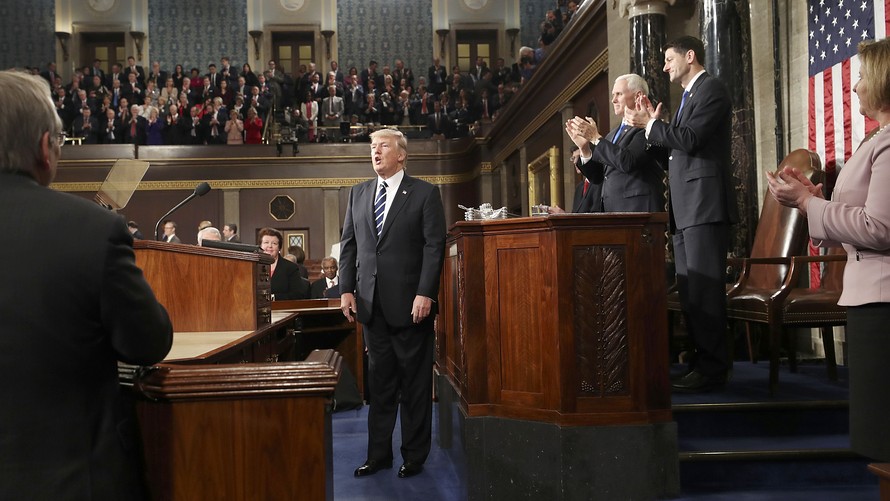 U.S. stock-market indexes closed at a new round of records Wednesday as investors welcomed President Donald Trump’s conciliatory tone during his address to a joint session of Congress, despite a lack of details on his economic plans.

Some analysts suggested that the absence of protectionist comments as well as his overall tone that was perceived as “presidential” instilled confidence among investors, sending global equity markets higher. Stocks even rose slightly higher following the release of the Fed’s Beige Book, which pointed out that business optimism has cooled a bit since the election.

See: This stock-market rally isn’t all about Trump’s newfound ‘tone’

Both the Dow and the S&P had been absent one-day gains of 1% or more since Dec. 7, a total of 55 trading days, according to Dow Jones data.

The surge for stocks, on the heels of Trump’s speech, also comes as the expectation for a rate increase by the Federal Reserve as early as mid-March have increased significantly. The probability for a March rate increase stands at 66%, up from a probability of 35% on Tuesday, according to CME Group’s FedWatch tool.

“What’s really changed on the economic front is tough to say,” said Ryan Detrick, senior market strategist for LPL Financial, in an interview. “But the Trump speech moved expectations higher. Now it’ll be a surprise if [the Fed doesn’t] raise rates.”

Read: This stock-market rally isn’t all about Trump’s newfound ‘tone’

Adding to that, on Tuesday, New York Fed President William Dudley said the case for a U.S. interest rate increase has become “a lot more compelling.”

“The economy is doing well, as we can see from today’s inflation and manufacturing numbers and any additional stimulus will put it into even a higher gear, and stock markets like that,” said Mark Kepner, managing director of sales and trading at Themis Trading.

“I think the Fed’s clear optimism about the economy, even when not factoring in a Trump boost, is feeding the positive sentiment in the markets at the moment,” said Craig Erlam, senior market analyst at Oanda, in emailed comments. “Investors don’t fear rate increases like they have in the past, instead it’s the pace of tightening that they’re focused on, and three hikes this year is clearly palatable,” he added.

However some investors still see prices for stocks getting lofty after a string of records for U.S. equity benchmarks in 2017. Substantial gains in the markets have sent valuations to highest levels in more than a decade, with some analysts warning of potential pullbacks.

“When markets are extended and overbought, they are vulnerable to any shocks that could trigger pullbacks or corrections,” said Quincy Krosby, market strategist, at Prudential Financial.

The Dow industrials ran from clearing 20,000 for the first time to clearing 21,000 in 24 sessions, tying a record set in 1999 for the shortest 1,000-point gain. While the current jump is smaller on a percentage basis, it’s still psychologically compelling, especially when it took nearly two years for the Dow to reach 19,000 after it first passed 18,000, as markets were dealing with an earnings recession, Detrick said.