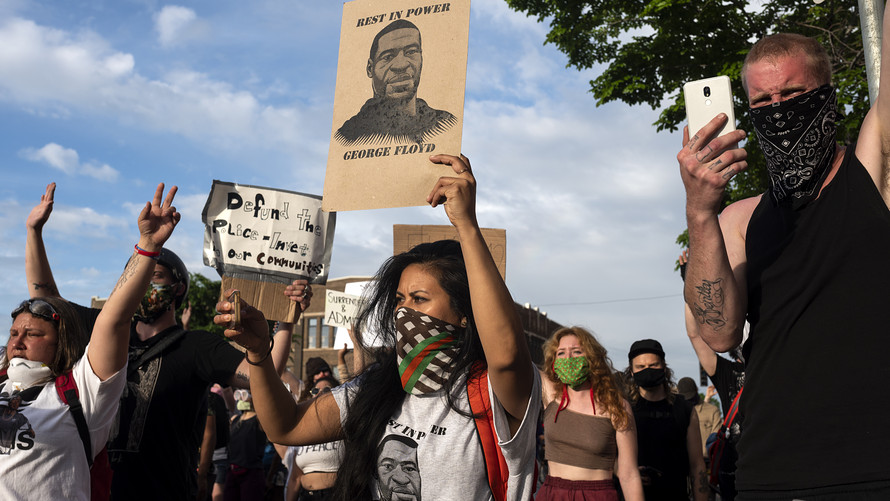 Stephen Maturen/Getty Images
The First Amendment protects the right to protest, but it might not save you from getting fired, experts say.

An attorney at a large law firm is accused of participating in a Molotov cocktail attack on a New York City police vehicle Saturday night during protests over the death of George Floyd — and the lawyer now faces a federal case and hard scrutiny from his employer.

Colinford Mattis was the alleged getaway driver in a firebombing on the unoccupied police vehicle, according to Brooklyn federal prosecutors. Police arrested Mattis, 32, and Urooj Rahman, 31, also a lawyer, who is suspected of throwing the Molotov cocktail. Both were awaiting arraignment Monday morning on charges punishable with at least five years of prison.

It was just one alleged incident over a weekend of national protests that sometimes turned ugly as demonstrators took to the streets to protest Floyd’s death, which occurred after a police officer allegedly put his knee on the unarmed man’s neck for almost nine minutes. The officer, Derek Chauvin, has been fired and is facing third-degree murder and manslaughter charges.

As the nation watches Chauvin’s case, Pryor Cashman, a law firm with offices across the country, is also keeping a close eye on Mattis’ case. He is an associate in the firm’s corporate practice group and has been furloughed since April, according to a statement from the firm.

“[Mattis’] employment status will be reviewed by the Executive Committee as we obtain further information this week,” said Ronald Shechtman, the firm’s managing partner. He later added, “As we confront critical issues around historic and ongoing racism and inequity in our society, I am saddened to see this young man allegedly involved in the worst kind of reaction to our shared outrage over what had occurred.”

Information on Mattis’ defense lawyer was not immediately available. Mattis is also listed as a member of Brooklyn’s Community Board 5, a point of contact for local residents. He and Rahman, as well as a woman charged in a separate Molotov cocktail attack, are charged with felonies. Attorneys in New York can lose their law license with a felony conviction on their record.

While Mattis’ job hangs in the balance, it actually takes much less than federal charges for someone to lose their job, especially in the private sector, said Michael Green, director of the workplace law program at the Texas A&M University School of Law.

‘It affects an employer’s reputation and status when you have people associated with them, particularly with inappropriate, obnoxious or illegal behavior.’

Michael Green, director of the workplace law program at the Texas A&M University School of Law

Private employers are well within their rights to terminate workers for their off-duty conduct, he said. “It affects an employer’s reputation and status when you have people associated with them, particularly with inappropriate, obnoxious or illegal behavior,” he told MarketWatch.

That’s been shown time and again, Green said. For example, one man lost his job as a cook after attending the 2017 far-right march in Charlottesville, Va. that ended in violence. Green noted that even more recently, a woman lost her job at the investment firm Franklin Templeton for a Central Park altercation that went viral.

Some states have “lifestyle statutes” that protect workers from being fired for peaceful, legal off-hours behavior or beliefs, he said. If an employer can say those beliefs impact the worker’s performance, or how others work with them, they can legitimately fire the worker.

The government can’t punish or limit freedom of speech , but a private company has the right to censure its own employees based on its own company policy.

When it comes to government jobs, constitutional protections like free speech, equal protection and due process apply to workers, Green said. But even those don’t give employees blanket permission to speak freely. Courts balance a public employee’s rights against their employer’s rights to keep an organization running smoothly, he said.

Private-sector workers can’t cloak themselves in free-speech rights, experts previously told MarketWatch. Employees might have other legal provisions and social forces behind them, but not the First Amendment.

‘Congress shall make no law respecting an establishment of religion, or prohibiting the free exercise thereof; or abridging the freedom of speech, or of the press; or the right of the people peaceably to assemble, and to petition the Government for a redress of grievances.’

“There’s definitely not a right to protest in the private workplace,” said Paula Brantner, who consults with companies on anti-harassment efforts and other workplace issues as the principal and president of PB Work Solutions.

Ken Novikoff, a lawyer representing companies, echoed that point in an interview prior to the national protests and Mattis’ arrest. “A lot of people think the First Amendment applies to jobs with private employers, and it doesn’t,” he said.

But even if workers don’t have a constitutional leg to stand on, it’s not as if employers are itching to fire workers who do stage a protest. “Employers don’t want to fire people because it’s disruptive, and disruption affects profits,” said Novikoff, a partner at Rivkin Radler’s employment and labor practice.

“There’s a human aspect to it,” he added. “Employers aren’t heartless. They don’t want to destroy someone’s livelihood unless they absolutely have to.”

‘Employers aren’t heartless. They don’t want to destroy someone’s livelihood unless they absolutely have to.’

Most employees can be fired for any reason

In all U.S. states except Montana, laws start with the presumption that employees are with companies on an “at will” basis, meaning that they can be fired for any reason, Green said.

There are caveats and exceptions, like prohibitions against firing for race or gender, Green said. But at-will arrangements cut both ways: It’s easy for workers to leave, and also to be shown the door.

Private workers might not be able to justify the legality of their protests with the Bill of Rights, but they may have some protections under the National Labor Relations Act, the professor said. The law protects workers engaged in “concerted activity” to improve their own wages and working conditions and to unionize — or refrain from unionizing, the National Labor Relations Board said.

Employees who want to speak out against their companies have other factors going for them, such as media coverage, Brantner added.

The coronavirus outbreak has put a hard focus on the safety of workplace conditions for employees and customers alike. But even before that, Brantner said protest-minded workers had another advantage: The shifting expectations on what’s acceptable and not acceptable in the workplace. “We have fundamentally changed something about our expectations of the workplace,” she said.

This story was originally published Nov. 1, 2018, and has been updated.