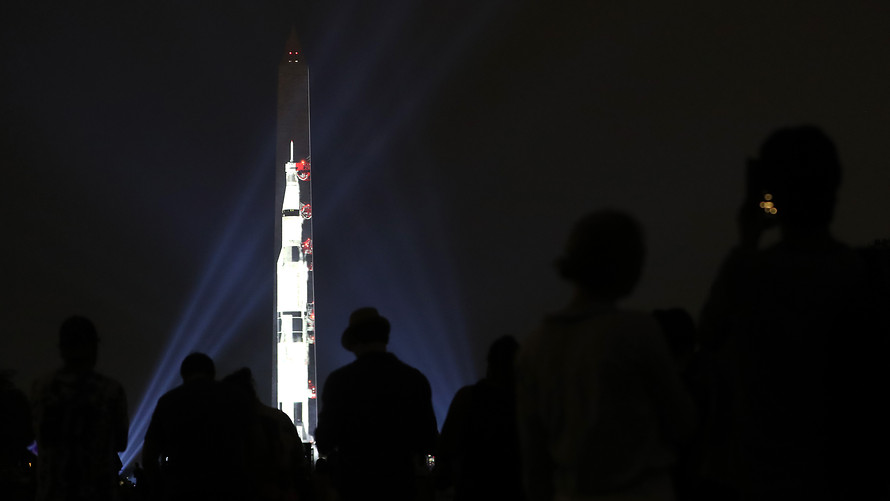 Getty Images
People watch as an image of the 363-foot Saturn V rocket is projected onto the Washington Monument on Tuesday night.

George Washington was no Rocket Man, but his namesake monument is now a rocket, man.

The Smithsonian Institution’s National Air and Space Museum is projecting a life-sized, animated image of a Saturn V rocket on the launch pad onto the face of the Washington Monument in honor of the 50th anniversary of the Apollo 11 mission, which culminated with the first men walking on the moon.

So for three nights starting Tuesday, from 9:30 p.m. to 11:30 p.m. Eastern, the east face of the Washington, D.C., obelisk will become a 363-foot, life-sized rocket, accompanied by a 17-minute video presentation. The display includes sound, and a 40-foot-wide countdown clock.

“Our identity as Americans is defined in part by the historic act of landing humans on the moon and returning them safely to … Earth,” museum director Ellen Stofan said in a statement. “The Washington Monument is a symbol of our collective national achievements and what we can and will achieve in the future. It took 400,000 people from across the 50 states to make Apollo a reality. This program celebrates them, and we hope it inspires generations too young to have experienced Apollo firsthand to define their own moonshot.”

Read: The business lesson from Apollo 11 that we shouldn’t forget