‘We are filling the stockpile in anticipation of a possible problem in the fall’: Government preparing for coronavirus second wave

Coronavirus cases in the U.S. have surpassed 2.2 million, and there are record daily highs in half-a-dozen states 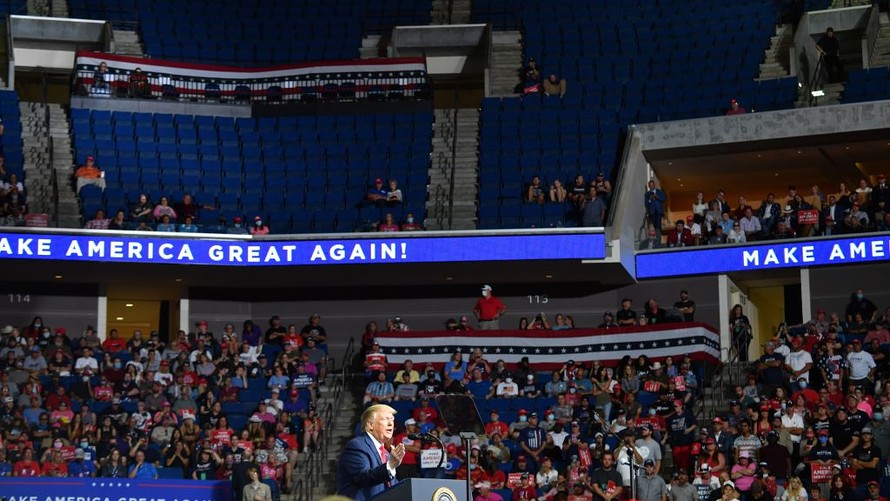 Getty
U.S. President Donald Trump speaks in Tulsa, Okla. on June 20. Most people at the rally did not wear masks. The U.S. cannot afford to have a resurgence of the virus either now or in the fall, health professionals say.

The Trump administration is preparing for another round of coronavirus in the fall.

“We are filling the stockpile in anticipation of a possible problem in the fall,” White House trade adviser Peter Navarro told CNN’s “State of the Union” show on Sunday. “We are doing everything we can beneath the surface, working as hard as we possibly can.” He added, “You prepare for what can possibly happen. I’m not saying it’s going to happen, but of course you prepare.”

‘We are filling the stockpile in anticipation of a possible problem in the fall.’

The U.S. cannot afford to have a resurgence of the virus either now or in the fall, health professionals say. For one, it’s harder to get people to practice social distancing and stay home again, especially after they’ve already abided by stay-at-home orders since mid-March. Secondly, the effect on the economy could push the U.S. into a prolonged recession.

Thirdly, the flu season will already be upon us in the winter and flu symptoms are easily confused with those of COVID-19. Fourthly, only 10% to 20% of the U.S. population at the very most will be immune to COVID-19 next time around. During the great influenza pandemic of 1918, the second wave was worse than the first, partly due to a more virulent strain of the virus.

The Organization for Economic Cooperation and Development released its twice-a-year economic outlook earlier this month, and presented two scenarios — one where the coronavirus continues to recede, and another where a second wave of rapid contagion erupts later in 2020. It said a second wave of SARS-CoV-2 is as likely as not.

Related: 5 critical mistakes that created the biggest public-health crisis in a generation

Anthony Fauci, director of the National Institute of Allergy and Infectious Diseases for three decades and one of the leading experts on the pandemic in the U.S., said this month that a second wave was not inevitable, but he has also noted that the outbreak is far from over. “In a period of four months, it has devastated the whole world. And it isn’t over yet.” He added, “Where is it going to end? We’re still at the beginning of it.”

MarketWatch photo illustration/Getty Images
Many epidemiologists advise more caution when talking about the reduced prospect of a second wave.

Scientists are worried by large protests across the country, and by the rally President Trump held in Tulsa, Okla. over the weekend where most people did not wear masks. Asymptomatic transmission “is the Achilles’ heel of COVID-19 pandemic control through the public-health strategies we have currently deployed,” according to a May 28 editorial in the New England Journal of Medicine .

Letter from New York: ‘When I hear an ambulance, I wonder if there’s a coronavirus patient inside. Are there more 911 calls, or do I notice every distant siren?’

The editorial, by researchers Monica Gandhi, Deborah Yokoe and Diane Havlir at the University of California, San Francisco, referred to recent study of a coronavirus outbreak at a skilled nursing facility, which concluded that epidemiologic evaluations of COVID-19 outbreaks within skilled nursing facilities “strongly demonstrate that our current approaches are inadequate.”

The Dow Jones Industrial Index /zigman2/quotes/210598065/realtime DJIA +1.06%  and the S&P 500 /zigman2/quotes/210599714/realtime SPX +1.49%  ended slightly higher Monday, as investors weighed progress in COVID-19 vaccine research amid fears of a surge of coronavirus in U.S. states that have loosened restrictions, and as the number of confirmed COVID-19 cases continues to rise.

The COVID-19 pandemic, which was first identified in Wuhan, China in December, had infected 9,074,624 people globally and 2,291,353 in the U.S. as of Monday. It had claimed at least 471,640 lives worldwide, 120,393 of which were in the U.S., according to Johns Hopkins University’s Center for Systems Science and Engineering.