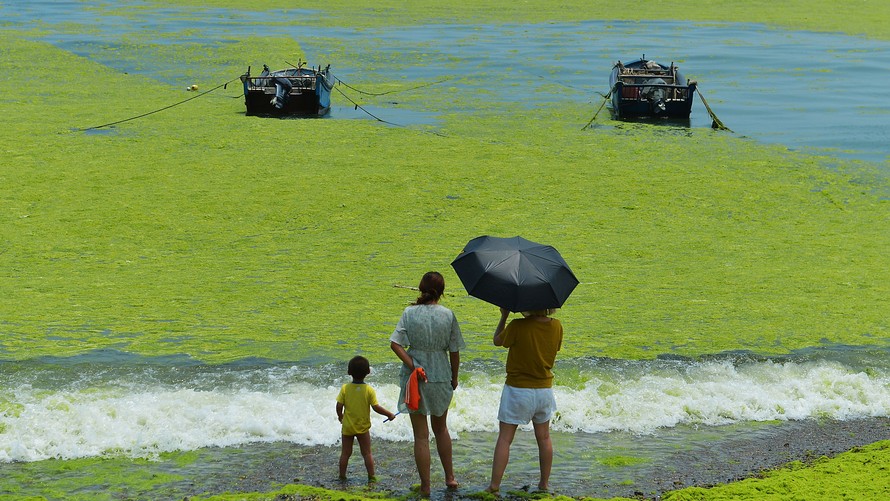 Getty Images
Algae floats in a bay in Qingdao, in China's eastern Shandong province. The bright green bloom is an annual phenomenon since an initial outbreak in 2008. It’s believed to be caused by a combination of warming sea temperatures and edible seaweed farming.

Allowing the planet’s ocean life to recover to full abundance by 2050 is not only achievable, a large group of research scientists says, but necessary to help feed the world, hold down insurance costs and keep profitable tourism afloat.

The ocean currently contributes 2.5% of global gross domestic product (GDP) and provides employment to 1.5% of the global workforce. Its estimated output was put at $1.5 trillion in 2010, which is expected to double by 2030, according to the Organization for Economic Cooperation and Development.

Supporting this economic engine is an effort that governments, universities and corporations can only jointly achieve and only if man-made climate change acceleration is checked, said Carlos Duarte, a professor of marine science, at Saudi Arabia’s King Abdullah University of Science and Technology (KAUST).

A report by Duarte, Agusti and others published in the journal Nature in April ahead of Wednesday’s marking of the 50th Earth Day, joins marine scientists across four continents, 10 countries and 16 universities. June 8 marks World Oceans Day, a concept first proposed in 1992 by Canada’s International Centre for Ocean Development and the Ocean Institute of Canada at the Earth Summit, part of the UN Conference on Environment and Development in Rio de Janeiro, Brazil.

Read: The first Earth Day 50 years ago was a shot heard around the world

What’s the cost for substantial rebuilding of marine life by 2050?

The researchers estimate at least $10 billion to $20 billion per year is needed to extend protection actions to reach 50% of the ocean space and substantial additional funds for restoration. Yet the economic return from this commitment will be considerable, projected by this group to be around $10 per every $1 invested and creating in excess of one million new jobs.

Ecotourism in protected areas provides 4–12 times greater economic returns than fishing without reserves, although rebuilt fisheries alone could increase the annual profits of the global seafood industry by $53 billion, the report argues. And conserving coastal wetlands could save the insurance industry $52 billion annually by reducing storm flooding while providing additional benefits of carbon sequestration, income and subsistence from harvesting and from fisheries supported by coastal wetlands.

Duarte and company believe they’ve offered specific, evidence-based recommendations to scale proven solutions globally but only if the industry that fishes these oceans and the governments that regulate them, grouped with nonprofits and others, all act with a singular purpose. Capital markets, too, must play their part.

The United Nations initiated, in 2018, a pact to reach a new legally binding treaty to protect marine life in the high seas by 2020. This proposed treaty could enhance cooperation, governance and funds for conservation and restoration of high-seas and deep-sea ecosystems damaged or at risk from commercial interests. This mandate alone would require funding of around $30 million annually, which could be financed through long-term bonds in international capital markets or taxes on resource extraction, the report suggests.

The report’s optimism is rooted in part in the fact that recovery has been achieved before. There was a rebound of fish stocks during World War I and World War II following a marked reduction in pressure from overfishing. Include as well the recovery since 1958 of coral reefs in the Marshall Islands from 76 megatons of nuclear tests and the improved health of the Black Sea and Adriatic Sea following a sudden reduction in the application of fertilizers after the collapse of the Soviet Union. More recently, a return to healthier population of humpback whales can be celebrated.

In fact, scientists the world over are trying to connect potential long-run impacts on the environment, health care and other factors from what’s been learned through the COVID-19 pandemic, which while costly in human life has brought a short-term lull in pollution and other detrimental environmental effects that are under study.