What Amazon is really accusing Trump of doing in JEDI deal

AWS says that president fired defense secretary after he refused to ‘screw Amazon’ out of big cloud-computing deal, brought in new leaders who changed the process to hurt Amazon’s bid 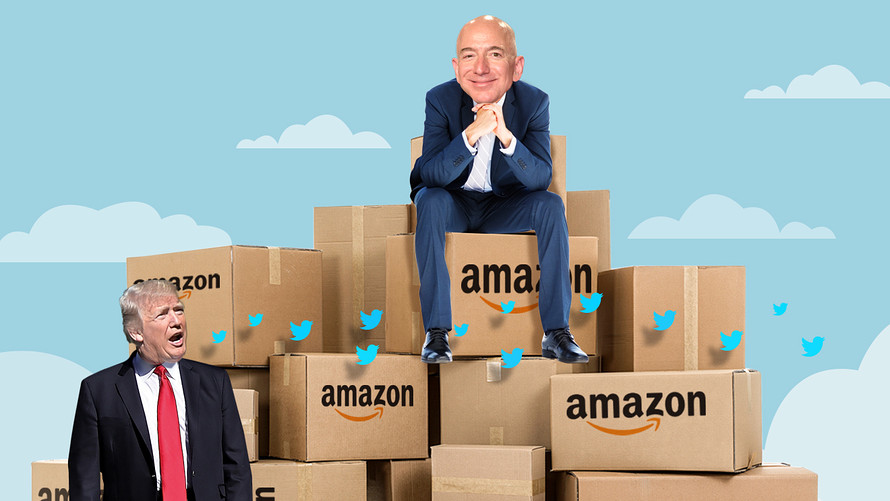 Much of the coverage of Amazon.com Inc.’s appeal of the $10 billion-a-year JEDI contract focused on President Donald Trump’s antagonistic tweets and statements about Chief Executive Jeff Bezos, but as is typical in this administration, the actions taking place in secret amid the tweets are much more important.

As impeachment hearings on Capitol Hill debate whether Trump abused his power as president to investigate a political opponent, Amazon’s /zigman2/quotes/210331248/composite AMZN +1.24%  complaint argues that Trump’s public bias against Bezos led him to compromise a major government contract for the Department of Defense. The timeline Amazon laid out includes the firing of a defense secretary, shifting requirements for the contract to specifically target Amazon Web Services, and a sham recusal at the last minute by the official Trump put in charge amid his demands for the contract to go to anyone but Amazon.

The Joint Enterprise Defense Infrastructure, or JEDI, contract has been full of controversies from the outset, with Oracle Corp. and International Business Machines Corp. alleging last year that it was tailored specifically for Amazon Web Services, the world’s largest provider of public cloud services. AWS did not end up winning the contract despite its perceived and actual advantages, however, and filed a sealed complaint with the Court of Federal Claims last Thursday to protest the Pentagon’s October decision to award the contract to Microsoft Corp. /zigman2/quotes/207732364/composite MSFT +0.93%

Don’t miss: Microsoft tries to stay out of Amazon’s JEDI appeal while continuing to improve Azure

A redacted version of the complaint was unsealed on Monday and outlines a scenario in which former Secretary of Defense Jim Mattis was fired by Trump after the president directed Mattis to “screw Amazon,” citing a book written by Mattis’s former chief speechwriter, Guy M. Snodgrass. Mattis, though, “wanted the process to be ‘done by the book, both legally and ethically,’” the complaint contends, an attitude that the claim says likely contributed to his firing.

While searching for a replacement, Trump’s public statements showed that he expected the new cabinet member to do what Mattis would not, Amazon says.

“President Trump’s attacks were relentless, and he resorted to increasingly aggressive tactics to carry out his apparent personal goal of preventing Mr. Bezos and AWS from receiving the JEDI contract,” the complaint states. “In early August 2019, President Trump — in an unprecedented move — intervened directly in the very final phases of the two-year procurement process. President Trump directed his newly appointed Secretary of Defense, Mark Esper (who replaced Secretary Mattis after President Trump claimed to have ‘essentially fired’ Mattis following repeated clashes with the president’s leadership), to conduct an ‘independent’ examination.”

A week after being sworn in, Esper officially ordered a re-review of the JEDI contract process, which Amazon says was already changing. The Pentagon switched up procurement procedures in the past few months of a review that stretched much longer than expected, deviating from its original request for the proposal, and, according to Amazon, committing many evaluation errors.

“The DoD engaged in arbitrary, capricious, and unlawful conduct through its biased, bad-faith decision making in its proposal evaluations and award decision,” Amazon contends, which “created a false parity between the two competitors’ technical capabilities,” Amazon said.

Amazon’s complaint spends dozens of pages going over the technical procurement comparisons, with many redactions. One of the most interesting points disclosed is that in the spring of 2019, two years after the initial procurement request was posted, the Pentagon suddenly changed its interpretation of the classified infrastructure requirements. The change mandated that AWS build new dedicated infrastructure for DoD, rejecting AWS’s longstanding plan to use existing data centers already certified for classified use, a move that would raise the price, though the actual dollar figure is redacted.

Amazon, unlike Microsoft, already had data centers with classified status, which meant this last-minute change would only affect AWS’s proposal. Amazon contends that the Pentagon made this and other late changes after the procurement process had laid bare differences between the two, making it simple to change the process in order to target Amazon.

“These and other late-breaking DoD-directed changes — all of which arose after DoD’s discussions with offerors and focused disproportionately on AWS’s unique capabilities — were unnecessary from a technical and overall mission perspective and increased AWS’s total evaluated price,” Amazon says.

The personnel issues are just as notable as the technical procurement issues. The complaint noted that on Oct. 22, 2019, Esper recused himself from the selection review, “out of an abundance of caution to avoid any concerns regarding his impartiality.” His son’s employment at International Business Machines Corp. /zigman2/quotes/203856914/composite IBM +0.13% was noted as a reason at the time.

Amazon points out, though, that Esper’s son had worked at IBM for six months by that time, as Esper was overseeing the process. It also noted that the Defense Department had already selected Microsoft five days before Esper recused himself: A so-called source selection decision document, dated Oct. 17, declared Microsoft as the winner of the contract.

Microsoft, for its part, is trying to lay low, and told MarketWatch in a statement that “we believe the facts will show they [the Department of Defense] ran a detailed, thorough and fair process.”

The Department of Defense declined to comment on the specific claims in the appeal, but a spokeswoman provided a statement in defense of the entire process.

“This source selection decision was made by an expert team of career public servants and military officers from across the Department of Defense and in accordance with DoD’s normal source-selection process. There were no external influences on the source selection decision. The department is confident in the JEDI award and remains focused on getting this critical capability into the hands of our warfighters as quickly and efficiently as possible,” she wrote in an email.

Trump’s alleged interference in the procurement process is beginning to get attention on Capitol Hill, even as other allegations of Trump steering the government toward helping him personally command the spotlight. In a column published last Friday, Stan Soloway, president and CEO of Celero Strategies, LLC, a government procurement expert, pointed to the JEDI complaint by Amazon, and a controversy around the contract awarded to Fisher Sand and Gravel, a small North Dakota company, to build part of the border wall. The chairman of the House Homeland Security Committee asked for a review of that $400 million contract , due to alleged influence by the Trump administration.

“The federal procurement system is specifically designed to be apolitical,” wrote Soloway in Government Executive. “Indeed, the very essence of federal acquisition is that awards must demonstrably be in the best interest of taxpayers. And any explicit or implicit effort to violate that core tenet is both illegal and a direct assault on the public interest. Full stop.”

Trump very publicly politicized this federal procurement, as Amazon notes, but the behind-the-scenes machinations that Amazon alleges are even more worrisome. The president should not be allowed to use government contracts to further his own political agenda instead of making the decision that is best for our military and taxpayers, but Amazon contends that President Trump did exactly that.