Which cannabis companies are going to survive coronavirus? Here’s how to tell

The sector was already shaky before COVID-19, but companies must now have the right mix of cash, pot and sales channels to make it to the other side 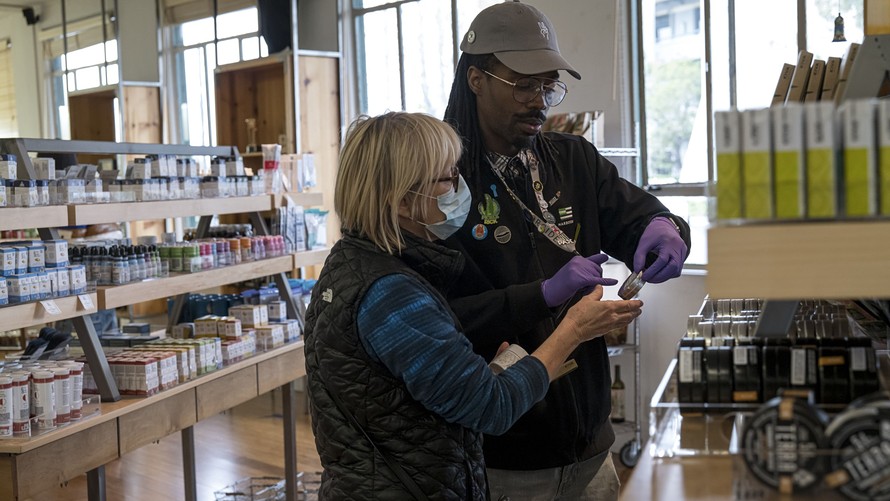 Bloomberg News/Landov
Abundance of inventory, once thought to be a burden, may prove beneficial to weed companies during the pandemic and recession.

Before the outbreak of COVID-19, cannabis stocks had plummeted from fattened valuations as they failed to find promised profit and seemed at risk of bankruptcy. The global pandemic has made the situation even worse, and investors now are looking for companies that will simply survive.

There are only two names in the legal-marijuana sector that investors can look to for relative safety. Some of the remaining companies may be safe, too, depending on how much cash they have, their stockpile of pot, retail access and their ability to make more marijuana products.

The two cash-rich companies are the easiest to pinpoint as able to make it through the pandemic. Canopy Growth Corp. (TSE:CA:WEED)   (NAS:CGC)  has long had the strongest balance sheet, snatching up a $4 billion investment from Corona distributor and beverage giant Constellation Brands Inc. (NYS:STZ)  in 2018. Executives have bled the war chest quarter-after-quarter, making questionable acquisitions and losing hundreds of millions on operational expenses. But under the leadership of freshly installed Chief Executive David Klein, Canopy has begun to rein in expenses and curtail operations in a move toward eventual profitability.

Trading close to the cash value of the company divided by the number of shares, Cronos Group Inc. (NAS:CRON) (TSE:CA:CRON)  is seen by many investors MarketWatch spoke with as a relatively safe place to park money. It has $1.51 billion in cash, in large part due to tobacco-maker Altria Group Inc.’s (NYS:MO)  investment.

“It’s a great defensive stock,” Raymond James analyst Rahul Sarugaser said in a phone interview with MarketWatch. “Given that it’s trading at just above cash, it’s effectively trading close to its bottom and anything [the company] announces will generate upside for investors.”

Even though Cronos is the second largest cannabis company in Canada, it doesn’t have much in the way of revenue or market share. Referring to Cronos Group’s lackluster sales, Cowen analyst Vivien Azer said in a recent note: “Who needs revenues, when you have cash?”

In the U.S., where access to capital has been harder due to the plant’s prohibited status under federal law, viability is even less certain. Without federal bailout money and with operations limited to 11 recreational markets and 33 medical states, it remains unclear which companies will survive.

On both sides of the border, companies face doom before the economic turmoil abates, but on a sliding scale based on how they rate in the following four areas:

Unlike other industries, weed companies were struggling to raise money well before coronavirus dried up potential investment. The market upheaval that has accompanied the COVID-19 pandemic makes a bad problem worse, according to Entourage Effect Capital managing partner Matt Hawkins.

“For more than a year now, we’ve had a distressed marketplace, for no other reason than it’s capital-starved,” Hawkins told MarketWatch.

The pandemic will exacerbate the issue, Hawkins said — companies with enough cash on the balance sheet or a road to profitability for 12 to 14 months will be able to weather the storm

“Cash is king, cash will continue to be king,” he said.

Don’t miss: Aurora Cannabis will roll up its shares in a reverse stock split — here’s what you need to know

Jefferies analyst Owen Bennett agreed. Until now, Bennett and his team did not assign cash too much weight when determining an investment thesis, but, “we think that going into a recession, it can’t be ignored.”

Cash is also important now because it’s hard to get. Bennett pointed to Tilray Inc.’s deeply unfavorable $90 million equity sale in March, which represented a 66% discount to the company’s average price.

According to a hedge fund portfolio manager who invests in the cannabis industry, there are two broad groups of cannabis companies: those with liquidity in their stock, which means they will be able to raise more cash, and illiquid companies, which include many companies listed on junior exchanges. For the second group, the scenario is “worse than ever,” he said. 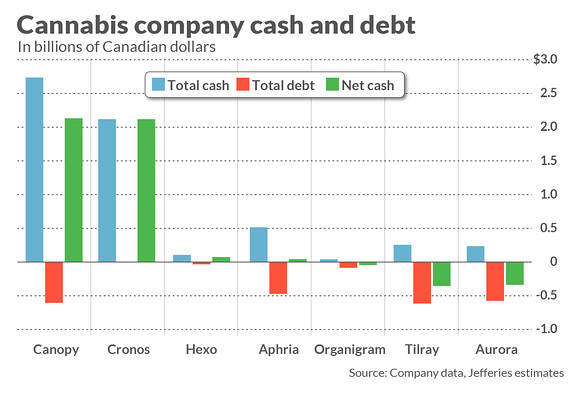 Once considered to be an albatross around the neck of Canada’s largest producers, excess inventory is now desirable.

According to a note from Jefferies’ Bennett, companies with immense inventory will be at an advantage if there are supply shutdowns, in terms of cash flow, much like producers with a large capacity benefited during the early days of recreational legalization in Canada.

“Now, it seems that large accumulated inventories may prove to be an indicator of resilience during the COVID-19 era,” Sarugaser wrote in a recent note.

Companies without a lot of product on tap must grow it. But growing, processing and transforming cannabis into products, whether that means packing flower for smoking or making products such as edibles or vapes, is now more complex because of the different way companies must operate during the pandemic.

See also: As cannabis industry stays largely quiet on coronavirus, this CEO has been sounding the alarm

Few major producers have made public disclosures or reported financial results since March. Aurora Cannabis Inc. (NYS:ACB) (TSE:CA:ACB)   has long touted the level of automation at its flagship Aurora Sky facility in Alberta: “The level of automation at Sky-class facilities is definitely an asset at all times in terms of increasing the reliability and efficiency of our operations,” a company spokeswoman told MarketWatch for this story.

Other cannabis companies have said little about the effects of social-distancing and other safety measures on their cannabis production.

Mitch Baruchowitz, managing partner at Merida Capital Partners, a cannabis-focused private-equity firm, said the larger U.S. multistate operators such as Cresco Labs, Green Thumb and Curaleaf already have a fair amount of automation and an advantage over smaller operators who still rely on human labor for various aspects of cannabis production.

One other advantage shared by all cannabis companies is that they are forced to operate wall-to-wall within states, and tend to source production inputs such as soil and other raw goods from local vendors, Baruchowitz said.

In Canada, as a second generation of cannabis product sales begins in earnest — including edibles, vapes and drinks — companies that already have products on the market are at a distinct advantage, according to Sarugaser. Weed businesses that were formulating new products will be delayed because it will be impossible for companies to set up production lines, refine the products and complete quality assurance testing, among other things, while the emergency measures are in place.

Read: Aphria yanks forecast due to coronavirus after strong increase in cannabis sales

One of the longstanding excuses for lackluster sales that Canada’s largest cannabis companies have given investors is that bricks-and-mortar pot stores have been slow to open. Ontario has received the lion’s share of the criticism, but other provinces have had their issues too. As Canada responded to the pandemic, Ontario again befuddled investors: across most of the country and in the U.S., weed wass considered an essential business. But Ontario shut down stores, only to reverse course days later and allow curbside pickup or delivery for the 52 open stores — though the online government-run pot store was always open for business.

“In sum, we see the stalling of in-person cannabis retail as one of the key mechanisms holding the Canadian cannabis market back from expending toward market equilibrium and further accelerating the attrition of the poorer operators,” Sarugaser wrote.

While curbside pickup presents its own complications for cannabis retail operators, Canopy Growth has shut down its corporate-owned pot stores in an abundance of caution, while other retailers remain open.

Don’t miss: Pot shops are considered ‘essential’ businesses in most states where it’s legal, but the rules are shifting

See also: Pot smokers stock up for pandemic on ‘the vice of choice when alone’

In the U.S., in every state where recreational pot is legal, cannabis is considered an essential business and sales continue to hum along — albeit with the required social distancing, delivery, or various click-and-collect systems in place.

That’s apart from Massachusetts. There, the governor has shut down all recreational cannabis operations, saying that because it is one of the few states in the northeast with legal pot, he is concerned people will travel from out of state to buy weed and potentially spread the virus. The decision doesn’t look likely to change, as a legal challenge to the governor’s order was defeated this week.

Companies with exposure to Massachusetts retail such as the Illinois-based Cresco Labs Inc. (CNQ:CA:CL)   (OTC:CRLBF) , Green Thumb and Curaleaf stand to suffer.