What did we learn from the 2000 tech crash? Three investors share lessons

Bubble 2.0? A technology series from MarketWatch 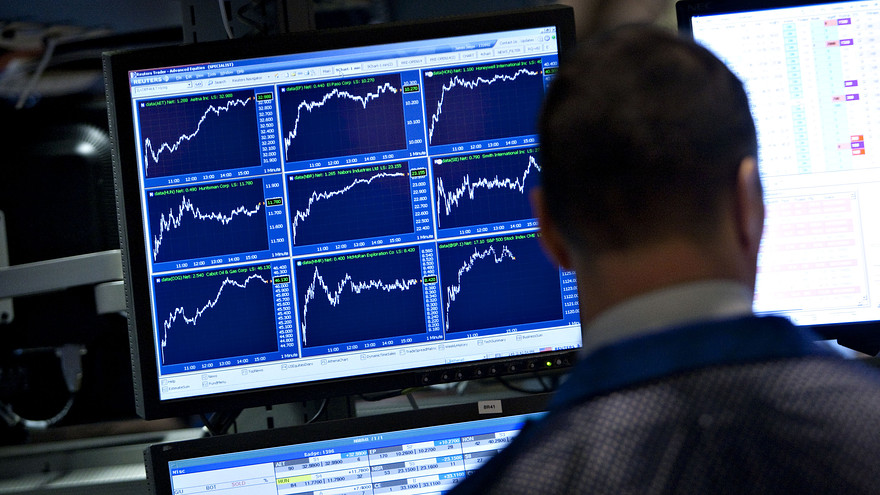 Bloomberg
Intraday stock charts are displayed on a monitor on the floor of the New York Stock Exchange on Jan. 4, 2010. Daniel Acker/Bloomberg

Our weeklong “Bubble 2.0?” series revisited the dot-com bust of 15 years ago and examines the similarities, differences and lessons for investors today.

The Nasdaq Composite Index hit an important milestone on April 23, when it finally rose above the all-time closing high set way back on March 10, 2000.

There is little question that, 15 years later, the landscape for tech stocks and investors is much better than it was then it was on March 10, 2000, just before the drop. Innovative tech companies tend to be in much better financial shape now than during the Internet boom of the late 1990s.

But today’s tech investors have challenges of their own. Chief among them: Startups today wait much longer to go public. That, investment professionals told MarketWatch, means if you are serious about playing tech growth stocks, you need to understand how privately held companies might affect those companies and sectors — without the benefit of SEC filings and their detailed financial statements and other disclosures.

What’s the risk? Ask a banker who spent years making loans collateralized by taxi medallions who didn’t consider the threat to the industry, and the value of the collateral, posed by Uber Technologies and similar services years ago. A June study by HVN Capital showed values of medallions dropping by 50% or more in various metropolitan areas. When Signature Bank of New York /zigman2/quotes/204403715/composite SBNY +1.54% on Oct. 20 said it had increased its quarterly provisions for loan losses, the only loan type mentioned was taxi medallion loans .

More from Bubble 2.0? A technology series from MarketWatch
Read : Why tech isn’t poised for another huge bust | The state of tech
Read : Why companies like Apple and Google are targeting your office
Read : How a ‘third wave’ of Silicon Valley leaders is building the future
Read : Tech veterans discuss Apple, Amazon and Google
Read : What IPO trends say about a biotech bubble and VC funding Read : These 5 charts say the Nasdaq’s surge is different this time

Newly public tech companies pose challenges of their own. Facebook’s May 2012 IPO ultimately turned out well for long-term investors — but not those who, familiar with the service but not the company, made panic sales and missed out on the shares’ rise since then.

More research into Facebook’s SEC filings might have helped. Before a company goes public, it files an S-1, or prospectus, with the Securities and Exchange Commission. Reading the S-1, and the updates filed companies approach an IPO, can help you understand whether or not the company is positioned for long-term success, and avoid the type of losses incurred by so many investors right after Facebook went public. 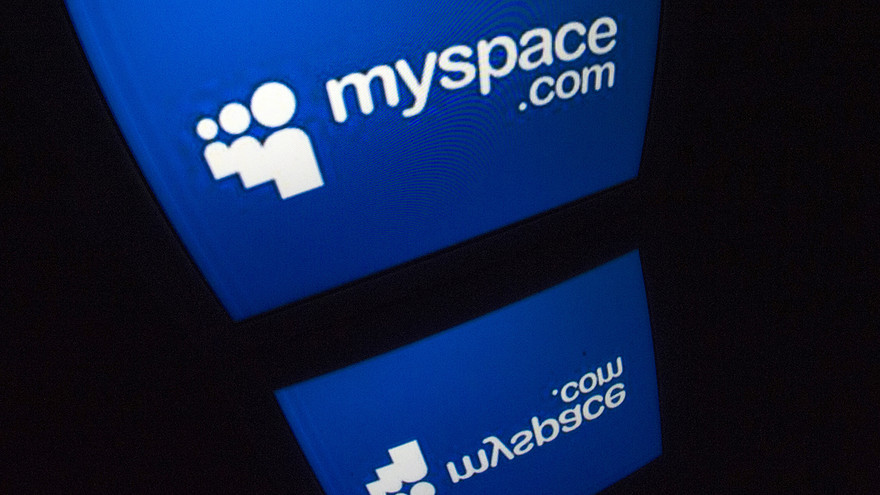 Getty Images
The saga of Myspace showed how an Internet pioneer could lose out to newer, more nimble competition.

Another high-profile tech startup, payment processing services company Square Inc., announced plans for an IPO and filed an S-1 on Oct. 14. The S-1 mentions Starbucks Corp. /zigman2/quotes/207508890/composite SBUX +0.24% 166 times, as the coffee giant is the biggest customer for Square’s payment processing services. Square, however, doesn’t plan to renew its contract with Starbucks, because it’s losing money on the deal, raising questions about whether or not Square can turn profits from similar deals.

Fifteen years is an eternity for the stock market. The lessons learned by professional money managers leading up to and during the dot-com boom and bust — and since — can be a big help to anyone with money in the stock market. We interviewed three investors about what they’ve learned about technology investing, asking them how the market has changed and searching for special opportunities and concerns about today’s environment. 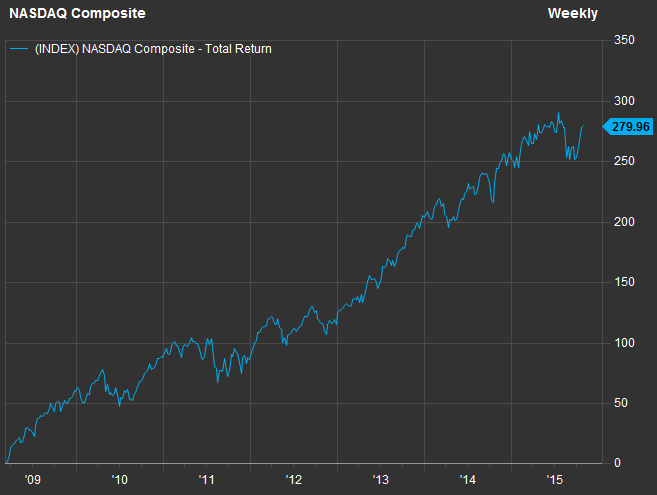 FactSet
The Nasdaq Composite Index has had a very strong run since the post-credit-crisis bottom in March 2009, but valuations relative to earnings are nowhere near as high as they were before the dot-com bubble burst in 2000.

The interviews came as the Nasdaq, a chart of which looks strong and steady over the past six years, is nowhere near as highly valued relative to earnings as it was on March 10, 2000. At that time, according to FactSet, the Nasdaq-100 Index /zigman2/quotes/210598364/realtime NDX +0.96%  index traded at more than 62 times weighted aggregate consensus earnings estimates for that year. Right now, it trades at 23.8 times estimated 2015 earnings.

Here is our panel:

• Ryan Jacob is the chairman and chief investment officer of Jacob Funds , based in Manhattan Beach, Calif. He founded the Jacob Internet Fund /zigman2/quotes/210367504/realtime JAMFX +2.53%  in 1999.

• Michael Cuggino has served as president and portfolio manager of the Permanent Family of Funds , based in San Francisco, since 2003, and has been a director of the Permanent Portfolio /zigman2/quotes/205061618/realtime PRPFX -0.12% since 1998.

• Steve Weinstein is the managing director and head of tech, media and telecommunications research at ITG Investment Research , which is based in New York. He began covering Internet stocks in 1998 with Pacific Crest.

While Jacob, Cuggino and Weinstein don’t follow the same approaches when analyzing potential investments, they covered some interesting common themes. (These interviews were conducted separately via telephone. Their responses were combined into a single publication by MarketWatch and have been edited for readability.)

How has tech investing changed since 1999?

Ryan Jacob: What is very different from the late 90s is most companies we’re seeing today have strong financial profile. In the past we were making it up as we went along at the dawn of the Internet age. Now it has become much more defined.

Back then we were looking at companies that were pre-earnings and in some cases, pre-revenue. You were investing at an extremely early stage.

Today we’re seeing the opposite of that. We’re seeing companies hold off before going public. These companies are much more mature when they become public. Not only do they have revenue, they have pretty significant revenue and cash flow. It is really a question of trying to find a valuation for these companies based on traditional metrics.

[Tech companies] are a little more stealthy when they are private, but we know what is going on with the private companies and their impact. The dissemination of information is always getting better.

Steve Weinstein: Investors are more thoughtful and more cautious these days. People are doing a lot more work to try to understand the businesses they are investing in, and not assuming companies will be able to continuously raise capital. It is just more cerebral.

Also, I think we have seen winners from that whole era, some companies that have gone on to do incredibly well, providing road maps or signals for what businesses may be successes and which ones may be failure.

Back then, a lot of things were based on hope that the Internet would develop scale and power. That did happen. So now I think we are seeing new companies that are even more explicit and more successful coming out of the gate than we were imagining 15 years ago. The opportunity to build a global business is just that much greater now.

You had a brand new type of technology gaining traction quickly, all things Internet, and you had all sorts of stakeholders who conspired to drive that sector’s performance until the selloff in 2000.

The industry was brand new. Nobody knew how it was going to impact our lives, except that it would, so you had a mad scramble to try to figure it out and monetize it. There was a lot of money looking for big and fast returns that would beat the equity indices at that time, which were having a very good decade. In hindsight, many of those businesses weren’t built on fundamentals. They were built on speculation, theory and buzz. Not many survived.

Looking back, professionals were not any better at picking winners than individual investors, but they were able to flip them to an eager public market that was looking to cash-in on this emerging technology.

Looking back, professionals were not any better at picking winners than individual investors.

Major changes since 2000 include the Sarbanes-Oxley Act of 2002, which made the “go public” versus “stay private” decision much more complicated, because of the additional cost and regulation required.

Because of the 2008 crisis, you haven’t had the same insatiable appetite for growth stocks like you had in the 1990s, so the public markets have not been as open to receive the supply of new companies. Where many inexperienced companies went public in the 1990s, now they’re more mature. They have been able to fine-tune their business models longer as private companies, have mature management teams and capital structures, and have built a history of revenue growth.

As such, the chances of success are higher. You can argue valuations have been a bit high lately, at least in the private markets, but overall valuations are much more reasonable than they were back then and built on stronger foundations.

What tech companies have surprised you with their success over the past 15 years?

Jacob: One company that endless amazes me, that they made it and continue to thrive, is Netflix /zigman2/quotes/202353025/composite NFLX -1.12% . Remember, Netflix was DVDs in the mail, competing with Blockbuster, and going through a few near-death situations, and had a botched split of the company. Today they have a lot of competition from streaming services.

Back when they were facing new competition from Blockbuster, they went through some seriously difficult times and they executed, kept moving the technology forward, stayed in the forefront and transitioned to streaming in a seamless way. And now they are creating content, which nobody expected five years ago. You have to be continually impressed by their management and execution.

We don’t own Netflix. We held it years ago.

I always viewed eBay as an electronic version of a flea market. That stock took off out of the gate, and I was amazed at how quickly people were adopting it. People have created whole businesses with eBay. This is why, and I think it is a credit to that company, they were able to create a viable, sustained, growing business out of it.

Recently and throughout their history, there has been a question of whether or not revenue growth has peaked. Where’s the next driver coming from? Have they maximized their potential?

Weinstein: I really focused on the Internet back then. We always had fairly high expectations for Amazon /zigman2/quotes/210331248/composite AMZN +3.04% , but if you compare to back then, when they were selling physical books, music and video, now media is a small piece of their business. They have moved into so many categories and a huge part of their valuation is tied to their cloud services business, which they didn’t even have back then.

[Editor: Amazon.com Inc. reported that sales from Amazon Web Services totaled $2.09 billion during the third quarter, up 78% from a year earlier. The unit contributed 8% of the company’s total third-quarter sales, up from 5% a year earlier.]