What Snowflake and JFrog are telling us about the IPO market now vs. 1999 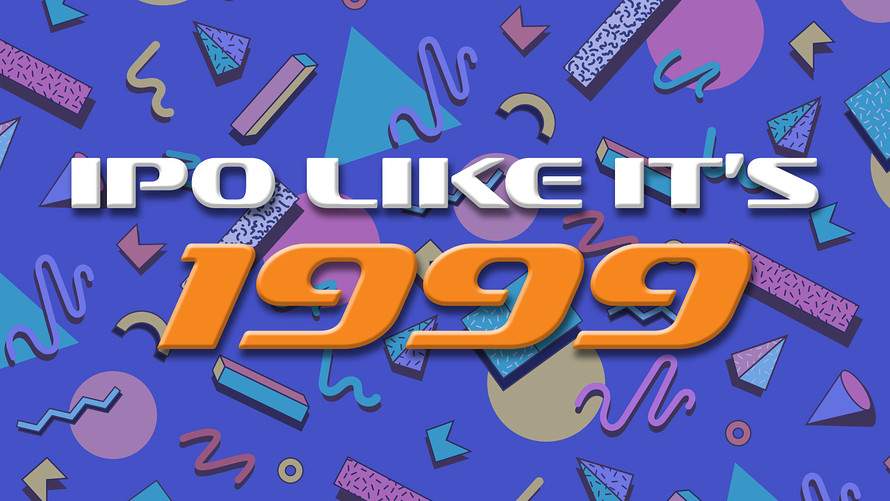 The IPO market hasn’t been this hot since the top of the internet bubble two decades ago. You’re probably already aware of individual examples earlier this week, including data warehouse company Snowflake, which shot up 112% on its first day of trading, while software company JFrog’s stock jumped 62%.

What you may not know is that the first-day returns for both Snowflake (NYS:SNOW)  and JFrog (NAS:FROG)  aren’t much higher than those of the other 42 operating-company IPOs that have come to market just since July 1. On a proceeds-weighted basis, according to Jay Ritter, a finance professor at the University of Florida and one of the leading experts on the IPO market, the average first-day return of all 44 IPOs so far this quarter is 57.5%. (Data are updated through Sep. 16.)

That’s higher than any calendar year’s average since 1999, as you can see from the accompanying chart. I need not remind you that the internet bubble burst in early 2000. 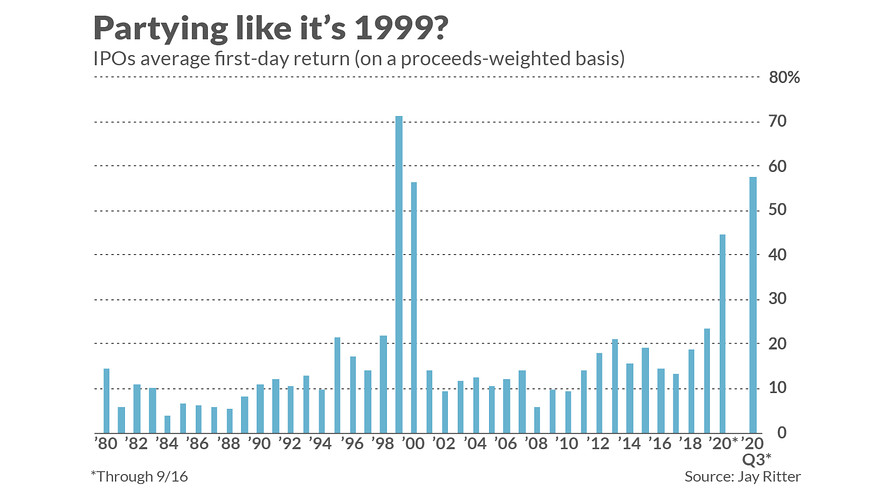 Does this mean the current stock market is vulnerable to a crash of similar magnitude? In the bear market that ensued when the internet bubble burst, for example, the S&P 500 (S&P:SPX)   fell 49.1% while the Nasdaq Composite Index (AMERICAN:COMP)  shed 77.9%.

Professor Ritter, in an interview, hedged when I asked him this question. On the one hand, he says, market conditions today are far different than what they were in 1999 and early 2000, making a crash less likely. On the other hand, the huge first-day returns of some recent IPOs do indicate that “there is some froth” in the market.

What are the different market conditions that exist today? One is the lingering effect of the stock market’s waterfall decline in February and March, according to Ritter. That plunge created such fear and uncertainty that IPO underwriters have been wary of setting too high an initial offering price. One consequence of their setting intentionally low prices is that IPOs enjoy bigger first-day bumps after going public.

Instead of reflecting irrational exuberance, therefore, IPOs’ huge first-day returns may in part be a function of the still-fresh memories of the bear market earlier this year.

Another difference between today’s market conditions and those prevailing at the top of the internet bubble, Ritter notes: Then there was a huge disconnect between the valuations of the tech sector and the rest of the market. Today, in contrast, all asset classes have subdued expected future returns. This reduces the likelihood that there will be a big reset in the valuations of one asset class relative to others, he says.

The stock market historically has produced below-average returns when investors are exuberant.

Still, Ritter points out, there can be no denying that there is speculative excess in the market. That’s worrisome, because researchers have found that the stock market historically has produced below-average returns when investors are exuberant. The primary academic study documenting this tendency was conducted by Harvard Business School professor Malcolm Baker and New York University finance professor Jeffrey Wurgler. One of the indicators they use to quantify investor exuberance is the average first-day return of IPOs.

In an email, Wurgler pointed out that this average first-day return is a sensitive measure of investor sentiment because “it’s impossible to short-sell IPOs, so the first-day returns are driven by sheer speculation and optimistic buyers who may or may not do their homework on any given deal. There’s no upper limit on forces like that.”

This general situation is compounded in specific cases like Snowflake, he continued, because they “are hard to value even in normal times.” All in all, Wurgler said, “the extreme first-day IPO returns we’re seeing are certainly reminiscent of historical stock market bubbles.”