What Trump got wrong about what happened in Kenosha, Wis. 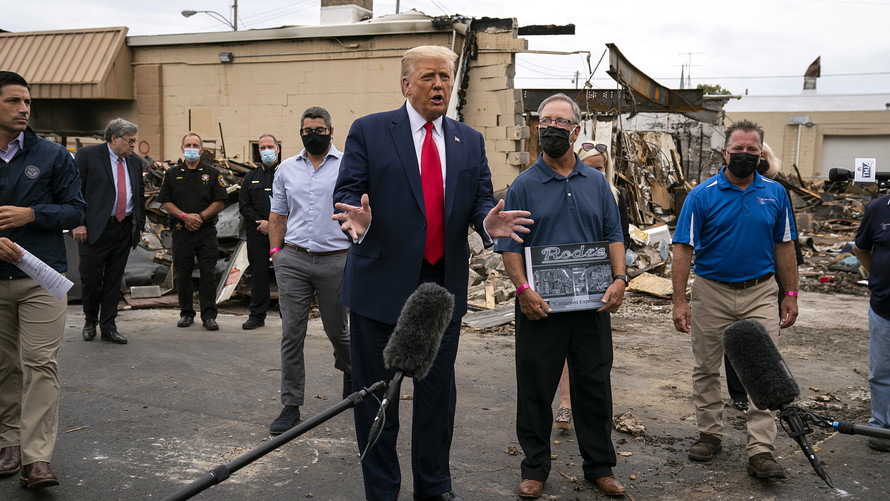 Associated Press
President Donald Trump stands beside a former Kenosha, Wis., camera-shop owner — the current owner told local media he’d declined a Trump request to be a part of his tour of damaged businesses and accused the president of using the incident for his own political gain — while surveying the area where demonstrations were concentrated, and where violent conflict occurred, after a Kenosha police officer shot Jacob Blake seven times in the back.

WASHINGTON (AP) — President Donald Trump is not waiting for a trial to sort out what happened on the streets of Kenosha, Wis., where prosecutors say a 17-year-old with a semiautomatic rifle fatally shot two men on a night of protest and violence. And he’s giving an account at odds with the authorities who charged Kyle Rittenhouse with homicide.

In remarks surrounding and during his trip Tuesday to Kenosha, Trump also falsely claimed credit for National Guard deployments that he did not authorize. Wisconsin’s Democratic governor, Tony Evers, did.

Trump, asked whether he would condemn the actions of Kyle Rittenhouse: “We’re looking at all of it. And that was an interesting situation. You saw the same tape as I saw. And he was trying to get away from them, I guess, it looks like. And he fell, and then they very violently attacked him. And it was something that we’re looking at right now and it’s under investigation. But I guess he was in very big trouble. He would have been — I — he probably would have been killed.” — news conference Monday before traveling to Kenosha on Tuesday.

The facts: His implication that Rittenhouse only shot the men after he tripped and they attacked him is wrong. The first fatal shooting happened before Rittenhouse ran or fell.

Trump did not say whom he meant by “they” — the two men he shot or others in pursuit of him. But he spoke in defense of someone who opposed racial-justice protesters, who, authorities say, was illegally carrying a semiautomatic rifle and whom prosecutors accuse of committing intentional homicide.

According to the criminal complaint released by prosecutors, victim Joseph Rosenbaum was shot and killed first, after following Rittenhouse into a parking lot, where Rosenbaum threw a plastic bag at the gunman and tried to take the weapon from him.

The medical examiner found that Rosenbaum was shot in the groin and back — which fractured his pelvis and perforated his right lung and liver — and his left hand. He also suffered a superficial wound to his left thigh and a graze wound to his forehead.

Rittenhouse then ran down the street and was chased by several people trying to stop him and shouting that Rittenhouse had just shot a person, according to the criminal complaint and cellphone video footage.

Rittenhouse tripped and fell. Anthony Huber, who was carrying a skateboard, was shot in the chest after apparently trying to wrest the gun from Rittenhouse, the complaint said. A third man was shot and injured.

Rittenhouse’s lawyer said his client acted to defend himself.

Trump, on Wisconsin officials and the National Guard, while in Kenosha: “Once they responded and once we took, you know, control of it, things went really well.”

The facts: That’s a distortion. He had nothing to do with the deployment of the National Guard in Wisconsin. The federal government never “took control of it.”

Wisconsin Gov. Tony Evers activated the state’s National Guard the day after a Kenosha police officer shot Jacob Blake, sparking protests and violence over police actions and systemic racism. When National Guard forces from three other states came in to help, it was because the governor had asked for that help from fellow governors, not the White House.

Evers said National Guard troops from Arizona, Michigan and Alabama were operating under the control of those states and Wisconsin, “not in a federal status.” The Guard answers to governors and sometimes state legislatures, not to Washington.

The federal government sent deputy marshals from the U.S. Marshals Service and agents from the FBI and the Bureau of Alcohol, Tobacco, Firearms and Explosives, about 200 in all. The restoration of order was primarily in the hands of National Guard units and local law enforcement.