What will the election say about the market?

The question is this: If you get taxed 15% now or double that later, will you sell now or wait for later?

There is no holy grail for predicting future prices. Serious analysts and traders compile market data to suggest what move has a higher probability. A probability is not a guarantee, just like a good weather forecast.

Let's review some of our data and see what it suggests about future prices. 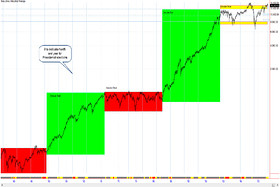 This monthly chart of the Dow shows the recent secular bear- and bull-market cycles. Secular trend cycles in the past tend to last approximately 200 months. The vertical lines on the chart mark the beginnings and ends of these 200-month cycles. If the 200 months pattern is to persist, it'll suggest that the current secular bear trend would end in 2015-2016.

Such bear trends tend to end after re-testing the mid-point of the current cycle. Similar to a bear going into hibernation, a bear market will become sleepy toward the end of its cycle. It may have one more volatility spike, but weaker than those before. 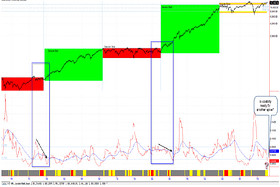 We can measure volatility using an Average True Range. Look at the blue rectangles marking the ends of the recent secular bear cycles. Volatility diminishes greatly as the cycle nears its 200-month turning point.