‘Unemployment breaking the 10% barrier so decisively is a big psychological lift,’ says another economist 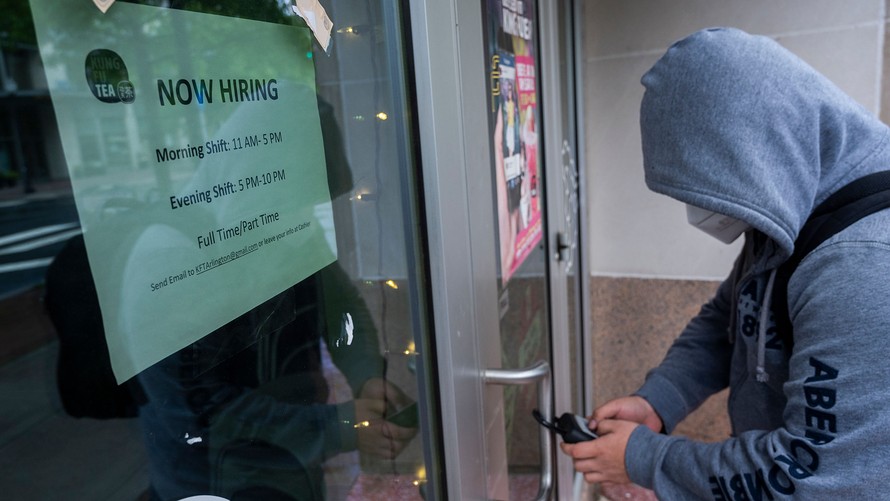 Getty Images
An employee earlier this year gets keys to open a restaurant that’s hiring in Arlington, Va.

The August jobs report on Friday showed the coronavirus-battered U.S. economy recovered 1.4 million jobs last month, with the unemployment rate falling to 8.4% from 10.2%.

Economists polled by MarketWatch had expected a gain of 1.2 million jobs and an unemployment rate of 9.8%.

•“Unemployment breaking the 10% barrier so decisively is a big psychological lift ... . The hiring of Census workers significantly added to jobs, but there were other key gains in the hard-hit retailing sector. Unfortunately, the easier jobs gains are over, and now we’ll be battling permanent layoffs once thought to be temporary, bankruptcies, secondary layoffs and maybe major layoffs in the airline industry. Expect that starting this month we’ll struggle to drop the unemployment rate as much, and possibly see break-even jobs months and even backsliding.” — Robert Frick, corporate economist at Navy Federal Credit Union

• “What’s concerning is that the pace of jobs growth is slowing down. If we had nothing but months like Aug going forward, it’d take another 8 months to get back to Feb levels, and longer to get back to our pre-COVID trajectory.” — Ernie Tedeschi, economist at Evercore ISI

• “More people with more jobs is something to celebrate, but we need to be concerned about how sustainable these gains will be. The labor market is clearly losing momentum, and the foundations appear fragile. With federal stimulus programs still lapsed and the threat of a second wave of the virus this fall, it’s not clear the labor market can keep improving on its own.” — Nick Bunker, economic research director at jobs website Indeed

• “One big concern in the report is that the number of reported permanent layoffs jumped by 534,000 to 3.4 million, which is up 2.1 million since February. Clearly some industries, notably restaurants and bars facing renewed restrictions in the face of higher infections, are struggling.” — Sal Guatieri, senior economist at BMO

• “This is a strong employment report. August payrolls rose 1,371k, essentially spot on the consensus but much better than the whisper number and much better than the ADP data suggested. The household survey found even faster job growth. Census hiring boosted payrolls by about 240k, but the private sector added 1,027k jobs, which is not bad.” — Chris Low, chief economist at FHN Financial

• “After 2 months of decent gains, the loss of momentum that began in July clearly extended into Aug. How much is related to renewed shutdowns/slow re-openings vs. a more lasting stall is unclear. We know that Congress needs to act.” — Steven Rattner, who ran the Obama administration’s auto task force

• “Note that about a quarter of the gain came in government jobs, largely due to temporary census worker hiring. ... Overall, this was brighter than some of the high frequency numbers that showed a larger deceleration in August, but essentially in line with expectations for the headline hiring gain.” — Avery Shenfeld, chief economist at CIBC.

• “The big drop in the unemployment rate was driven by a huge 3,756,000 rise in the household measure of employment and came despite an increase in the labor force of nearly one million. ... Employment growth is still set to lag the recovery in broader economic activity over the coming months given its greater exposure to the services sectors worst affected by the pandemic. Nevertheless, the August data illustrate that, despite the earlier surge in virus cases and more recent fading of fiscal support, the recovery continues to plough on.” — Andrew Hunter, senior U.S. economist at Capital Economics