Gold timers stubbornly refuse to throw in the towel 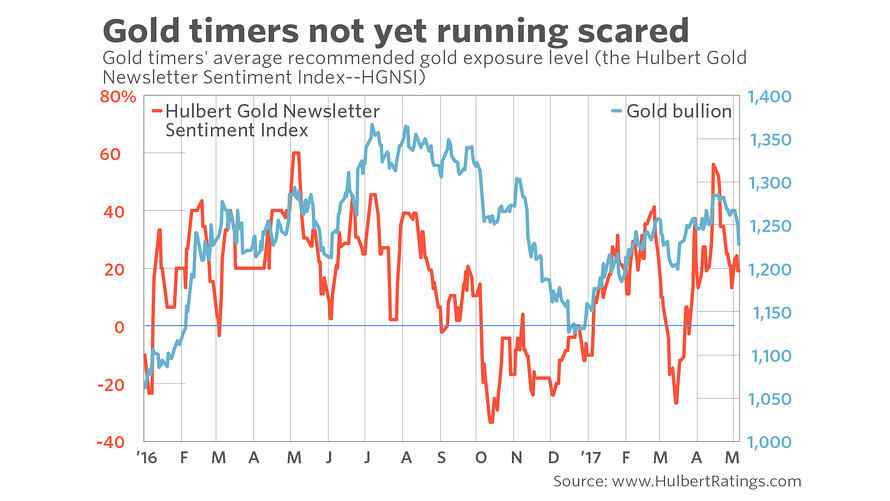 The odds of a contrarian buy signal for gold are even more remote today than they were six weeks ago.

Mid-March, you may recall, was when I last devoted a column to analyzing gold-market sentiment. Bullion at the time was trading around $1,320 ounce, and I concluded that gold market timers were not exhibiting “the widespread despair and pessimism that typically precede tradable gold rallies.”

Gold subsequently traded as high as $1,361 an ounce, before giving up most of that gain — including another $14 in trading on Monday of this week alone. Bullion today trades at almost the same price as where it stood in mid-March.

The sentiment picture is no better today than it was then. Consider the average recommended gold market exposure level among short-term gold timers I monitor (as represented by the Hulbert Gold Newsletter Sentiment Index, or HGNSI). Today that average stands at 45.7%, slightly worse than the 43.8% level at which it stood in mid-March. (See accompanying chart.)

I have found that gold’s most tradable rallies in the past have most reliably begun only when the HGNSI drops below minus 30%. That’s when the typical short-term gold timer is allocating around a third or more of his gold-oriented portfolios to shorting the market, which is an aggressive bet that gold will fall in price.

Consider the contrasting returns listed in the following table. The returns in the second column reflect the average of all periods since 2000 in which the HGNSI was minus 30% or lower. The third column reflects periods when the HGNSI was at least as high as it is currently (45.7%).

The differences reported in the table are significant at the 95% confidence level that statisticians often use when determining whether a pattern is genuine.

A couple of qualifications: These differences are averages, and there have been occasions in which gold has not lived up to contrarian expectations. But, more often than it has not, gold has played out the contrarian script.

Furthermore, the table lists returns over a three-month horizon. Even if the next three months live up to historical precedent, therefore, it’s certainly possible that gold’s path to that end result will be quite volatile—including what looks like a promising rally.

But if the future is like the past, any such rally will soon run out of steam.