‘When the looting starts, the shooting starts’: Trump threatens to call military into Minneapolis 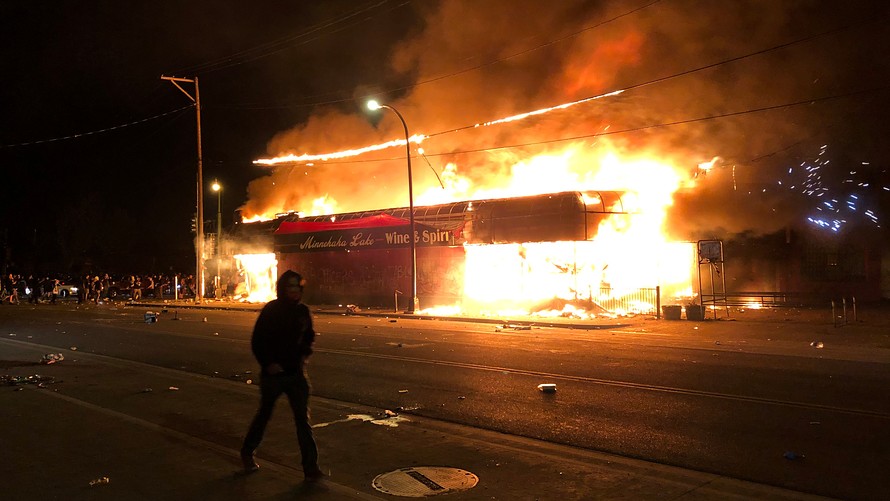 AFP via Getty Images
Flames rise Thursday from a liquor store near the Third Police Precinct in Minneapolis as protests raged over the death of George Floyd, an unarmed black man, when a police officer kneeled on his neck for several minutes.

President Trump early Friday threatened to “get the job done right” to control the violent Minneapolis protests if the city’s mayor doesn’t “get his act together.”

“I can’t stand back & watch this happen to a great American City, Minneapolis. A total lack of leadership,” Trump tweeted.

“Either the very weak Radical Left Mayor, Jacob Frey, get his act together and bring the City under control, or I will send in the National Guard & get the job done right.”

Frey turned the tables on Trump, calling the president weak: “Weakness is pointing your finger at somebody else during a time of crisis,” Frey said of Trump at a press conference held in the middle of the night. “Donald Trump knows nothing about the strength of the people of Minneapolis.”

Trump’s threat came as rioters in the city took over a precinct police station and set it ablaze in protest of George Floyd’s death.

Floyd, a black man, died Monday in police custody shortly after a white officer kneeled on his neck.

“These THUGS are dishonoring the memory of George Floyd, and I won’t let that happen,” he wrote.

“Just spoke to Governor Tim Walz and told him that the Military is with him all the way. Any difficulty and we will assume control but, when the looting starts, the shooting starts. Thank you!”

Frey, the Minneapolis mayor, emphasized in the after-midnight news conference that human life is more valuable than bricks and mortar, suggesting that property crimes such as the looting of retail stores or the takeover of a police station should not be met with deadly force.

A version of this story appears at NYPost.com.