Where is the red line for global equities?

Martin Pring is president of Pring.com a technically oriented educational web site and chairman of Pring Turner Capital, a conservative money management firm. He is the author of Technical Analysis Explained, now in its fourth edition and seventh language. He is a recipient of the coveted MTA Annual Award, Canadian CSTA Jack Frost Memorial Award and a fellow of the British Technical Society. His latest (co-authored) book is “Investing in the Second Lost Decade.” He helped create the Dow Jones Pring Business Cycle Index (DJPRING), a dynamic rules-based model designed to help institutions and individuals. An actively managed ETF (Symbol DBIZ) based on the strategies used in the Index, trades on the NYSE.

Trendlines are a very simple but very effective tool in the chartist’s arsenal. They gain their significance from their length; the bigger the trend the greater the importance. Since trendlines are dynamic levels of support and resistance it follows that the more times they have been touched or approached, in other words turned back rallies and reactions, the greater the effect when they are eventually violated. Finally, a trendline with a sharp angle of ascent or descent is supporting an unsustainable trend and does not have a much of an impact when ruptured.

So why the technical analysis 101? The answer is that the MSCI World Stock ETF /zigman2/quotes/208607471/composite ACWI +0.29%   may be about to cross several red lines. If that happens, and I stress the if part, it won't be good news for equities. 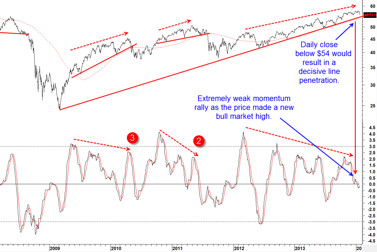 Chart 1 compares the ACWI with a proprietary indicator that monitors a basket of international-country ETFs registering net new highs over a 40-day period. The idea is that important market peaks are preceded by a smaller and smaller number of markets registering net new highs. We saw this in 2007, 2010 and again in 2011, as flagged by the numbers.

The same thing has happened recently, but this time the vulnerability is greater because of the larger number of divergences. In addition, the latest rally that took the price to a bull-market high barely pushed the indicator above zero, thereby underscoring the paucity of country ETFs registering new highs.

A reasonable question would be: How do you know that another divergence at higher prices will not develop? Or will these discrepancies be cleared up as the price and oscillator register a new high? The answer, quite simply, is we don't. That's why we need some response from the price action itself to this deteriorating situation. This process is known in technical jargon as a "confirmation."

Let me digress for a moment while we consider an analogy. I live in Florida where it rains mostly in the summer and where it takes the form of local thunder showers. You might go outside and see the blackest of clouds, and that usually means rain. However, since this type of precipitation is local, it's quite possible for someone else close by to receive the wet stuff as those clouds blow away before unloading their moisture. You never know whether it's actually going to rain until you can put your hand out and feel some droplets. That's the confirmation. When it develops, wise people quickly head for shelter because it then rains with a vengeance.

Confirmation of negative divergences in the markets is often given by the violation of a trendline. The three previous examples since 2006 were all signaled that way.

Chart 1 shows that the current red line is a very long one. It has acted as support on numerous occasions by either turning back reactions itself, or the price has closely approached it and then turned back. In either case, the line has acted as a springboard for higher prices. It also meets our third shallow angle of ascent requirement. I believe this is the red line for global equities.

Currently, it stands a bit above $54, so a break much below that on a daily closing basis is the signal I would look for. In technical analysis, there are no techniques which make it possible to consistently predict the character of a move. After all, the 2007 setup was followed by a devastating bear market, whereas those for 2010 and 2011 signaled an intermediate decline.

However, given the more numerous divergences in the current situation, as well as the significance of the 2009-20014 up trendline, I would venture a guess that something greater than the 2010 setback would be in the cards, should the line be penetrated. 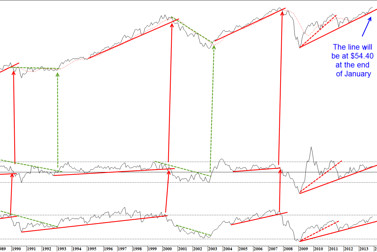 We also need to consider the fact that price at any one time is determined by the interaction of many cycles. This concept is represented in Chart 2 by the price and two momentum indicators. The idea is that when several cycles are turning simultaneously, this generally results in a fairly formidable move, more so than limited to one cycle alone.

This is known as the principle of commonality. The chart reflects this with the sets of bullish and bearish momentum trendlines. When their penetration is confirmed by similar action in the price an important long-term move is usually underway.

One notable exception to this normally reliable setup developed in 2011, where a perfectly legitimate bearish combination was followed by a truncated decline. However, the lines were relatively short and had a sharp angle of ascent. As you can see, another setup is emerging, but since none of the lines at the end of December had yet been breached, no signal was triggered. Nevertheless, this trendline structure does underscore the fragility of the current technical situation and necessity for prices to move smartly ahead if the momentum violations are to be avoided.

In this case, the number to watch for on a month-end basis would be $54.40, not so far away from the daily closing $54 benchmark in Chart 1.

If these lines are violated, I think we would see a fairly sizeable intermediate correction follow. Nevertheless, there would not be enough evidence from these violations alone to conclude that a primary bear market was underway. There is no disputing, though, that after a nearly five-year advance and a 120% gain, the bull market is certainly long in the tooth.

Also, as stated in our 2012 book Investing in the Second Lost Decade, the secular bear market that began in 2000 will likely extend until the end of the decade. Consequently, the time is ripe for another down leg, not necessarily below the 2009 bottom, but certainly enough to catch the attention of investors. It seems that whether the red line is crossed or not, it's probably a good idea to take some of the chips off the table right now.

Get news alerts on iShares MSCI ACWI ETF — or create your own.
Page 1