WASHINGTON (AP) — The White House on Monday released Justice Department legal opinions meant to bolster its case for defying subpoenas from Congress in the impeachment inquiry of President Donald Trump.

One opinion, dated Sunday, says Trump administration officials were free to disregard subpoenas sent last fall before the House of Representatives had formally authorized an impeachment inquiry. That approval, the memo says, is necessary before congressional committees can begin their own investigations and issue subpoenas for documents and testimony.

‘In completely obstructing an investigation into his own misconduct, President Trump asserted the prerogative to nullify Congress’s impeachment power itself.’

The opinion says lawmakers acted in “unprecedented” fashion by investigating the president without a formal vote from the House and by making “express threats of obstruction charges and unconstitutional demands” that officials appear for closed-door testimony about sensitive matters.

“Absent any effort by the House committees to accommodate the Executive Branch’s legitimate concerns with the unprecedented nature of the committees’ actions, it was reasonable for executive branch officials to decline to comply with the subpoenas addressed to them,” says the opinion from Assistant Attorney General Steven Engel, who heads the legal counsel office.

The opinion is significant because one of the two articles of impeachment being taken up this week by the Senate accuses Trump of obstructing the congressional investigation into his efforts to get Ukraine to investigate political rival Joe Biden. Republican allies of the president are likely to seize on the Justice Department conclusion to argue that the White House was on solid legal ground when it directed aides and officials to flout congressional demands for testimony and documents. 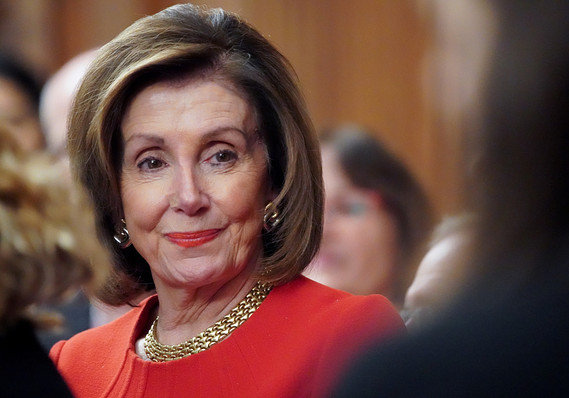 Reuters
Nancy Pelosi, joined by fellow Democrats, speaks during a news conference about legislation the House has passed during her second speakership.

Democrats, meanwhile, are unlikely to be persuaded that the administration’s defiance of subpoenas and refusal to participate in the impeachment inquiry has any legal basis.

“In completely obstructing an investigation into his own misconduct, President Trump asserted the prerogative to nullify Congress’s impeachment power itself,” House managers wrote Monday.

“He placed himself above the law and eviscerated the separation of powers. This claim evokes monarchy and despotism. It has no place in our democracy, where even the highest official must answer to Congress and the Constitution,” they added.

At issue are subpoenas issued last fall after news broke of Trump’s July 25 phone call with Ukraine’s leader, Volodymyr Zelensky, in which Trump asked for an investigation into Biden and his son, Hunter.

Since it wasn’t until Oct. 31 that the House established rules for the impeachment inquiry in a formal vote, subpoenas issued before then — such as the one to Pompeo — are not legally enforceable, according to the Justice Department opinion.

“At the opening of this Congress, the House had not chosen to confer investigative authority over impeachment upon any committee, and therefore, no House committee had authority to compel the production of documents or testimony in furtherance of an impeachment inquiry that it was not authorized to conduct,” the opinion states.

The opinion was requested by White House counsel Pat Cipollone, who is leading the president’s legal team in the impeachment trial.

It is one of several the office — which provides legal guidance for the executive branch — has recently issued that the Trump administration has pointed to in support of its positions.

Kupperman also sought guidance from a judge about whether he had to comply with a congressional subpoena or with a White House directive that he not testify. A judge last month dismissed the case as moot since the House subsequently withdrew the subpoena for him.

All three opinions were included in a legal brief the White House filed Monday before opening arguments in the president’s impeachment trial.