Who really benefits the most from Elizabeth Warren’s student-debt cancellation plan? 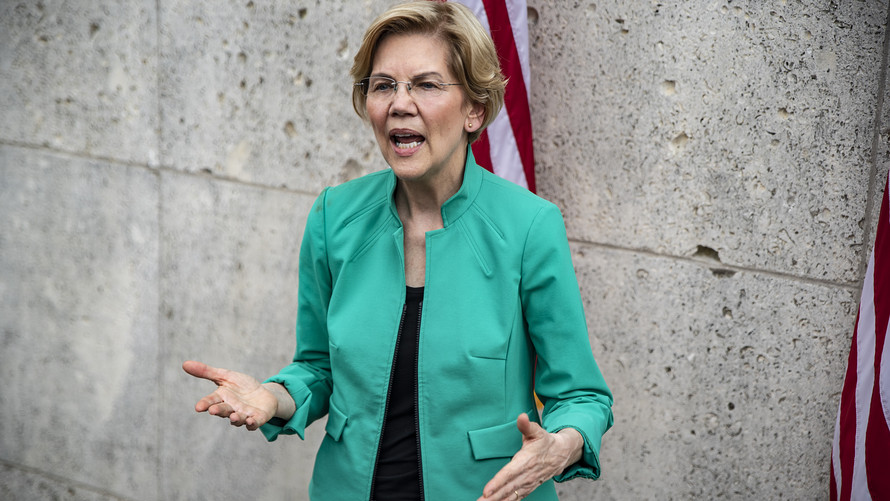 Sen. Elizabeth Warren’s plan to provide student-debt relief for millions of Americans was met with fanfare in some corners and consternation in others. She announced the proposal earlier this week as part of her campaign for the Democratic nomination for president.

Critics have derided the idea of student debt-cancellation as a boon to relatively high earners. They will likely have more student debt because they’re also likely to have higher levels of education.

Both come to similar top-line conclusions: Under Warren’s plan, borrowers in the second-highest income quintile would receive the largest share of total debt relief as measured by dollar amount.

The Brookings analysis produced by Adam Looney, the director of the organization’s Center on Regulation and Markets and a former deputy assistant secretary at the Treasury Department, found that borrowers earning between $68,000 and $111,000 per year would receive 38% of the benefit as measured in dollars.

‘It’s clearly trying to be responsive to concerns that if we forgave all debt, we’d be giving a subsidy to some high-income people.’

—Matthew Chingos, vice president for education data and policy at the Urban Institute

Warren’s plan aims to address these claims by capping forgiveness at $50,000, ensuring that only those making less than $100,000 would receive that full debt relief amount and making anyone who earns $250,000 or more ineligible for the benefit.

“It’s clearly trying to be responsive to concerns that if we forgave all debt, we’d be giving a subsidy to some high-income people,” Matthew Chingos, vice president for education data and policy at the Urban Institute and one of the authors of the analysis, said of Warren’s plan.

“How the benefits are going to be distributed depends not just on how the plan is structured, but on who holds debt and how much they hold,” he said. “People in the middle, upper-middle [income quintiles] are getting more than their share of the population.”

While it may be the case that middle- and upper-middle income households get a disproportionate share of the student-debt cancellation benefit in dollars, supporters of debt cancellation note that doesn’t mean they would necessarily benefit more under Warren’s plan.

Low-income households with student debt often have relatively low balances — often a sign that they didn’t make it very far in higher education or that they earned a credential with limited value in the labor market — and they struggle more to pay it off.

The Brookings analysis shows that borrowers earning between $0 and $68,000 per year would receive about 34% of the student debt relief in Warren’s plan in dollar figures.

The Brookings analysis shows that borrowers earning between $0 and $68,000 per year would receive about 34% of the student debt relief in Warren’s plan in dollar figures. But it would wipe away 87% of the debt for the lowest income borrowers in that group and 81% for the highest.

The Urban Institute analysis offers another way to understand the impact of relatively small dollar amounts of debt relief for these borrowers. Those with student debt who earn $22,000 per year would receive $19,364 in debt relief on average — nearly their entire annual income.

“This is still going to have a huge effect on people who are the most burdened by college debt,” said Louise Seamster, a sociologist at the University of Tennessee, who worked on an analysis of the plan distributed by Warren’s campaign. “The dollar amount of debt can be relatively small for poorer families and be way more of a burden in their lives.”

Warren’s plan allows borrowers earning up to $250,000 per year to receive some sort of benefit, but that isn’t necessarily a problem, said Julie Margetta Morgan, a fellow at the Roosevelt Institute, a progressive think tank.

For one, Warren’s design, which uses a tax on the ultra-wealthy to pay for the plan, doesn’t force a choice between helping these borrowers and those with lower incomes, she said. It also provides funding to make college more affordable going forward.

But more broadly, Warren’s plan is premised on the idea that our debt-financed higher education system is a policy failure that needs to be addressed. That policy failure means that borrowers who aren’t suffering the most dire consequences of student debt — default and delinquency — are still struggling in some cases, Margetta Morgan said.

“We have to be comfortable with the idea that building an inclusive and strong economy means letting go of the notion that only those who suffer the most extreme harms deserve relief through cancellation.” she said.