Pregnancy loss takes a huge emotional and financial toll — which many people still don’t talk about. Teigen is breaking that silence. 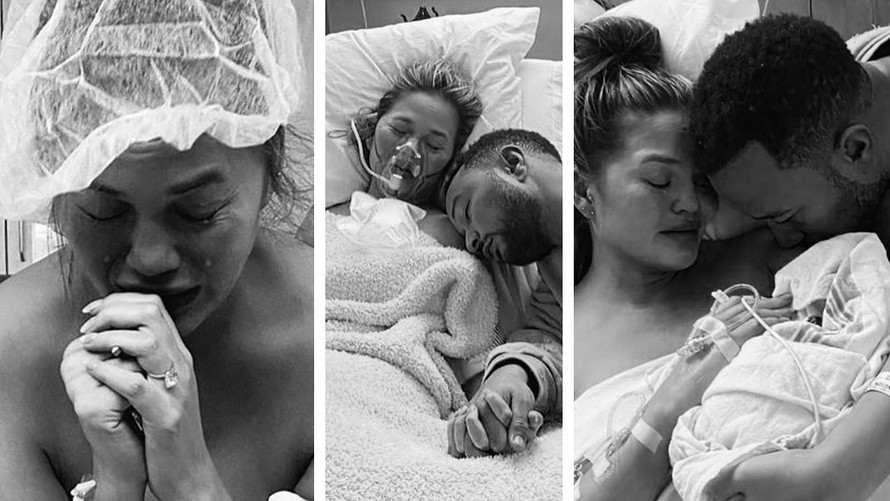 Chrissy Teigen and John Legend received an outpouring of support on social media earlier this month after revealing that they lost their third child following pregnancy complications. They also caught a ton of flak for sharing a series of intimate, black-and-white photographs documenting their family tragedy.

But in a raw, personal essay posted to Medium on Tuesday , Teigen said that she doesn’t regret posting the pictures.

“I cannot express how little I care that you hate the photos. How little I care that it’s something you wouldn’t have done,” she wrote. “I lived it, I chose to do it, and more than anything, these photos aren’t for anyone but the people who have lived this or are curious enough to wonder what something like this is like. These photos are only for the people who need them. The thoughts of others do not matter to me.”

And she felt compelled to share one of the worst experiences of her life, because sadly, 10% to 20% of known pregnancies end in miscarriage , so many people have shared the celebrity couple’s pain.

Teigen, a cookbook author, model and social-media influencer, shared a series of black-and-white photos to Instagram /zigman2/quotes/205064656/composite FB +0.28%  and Twitter /zigman2/quotes/203180645/composite TWTR +0.50% late Oct. 1. One showed her tearfully clasping her hands together while sitting in a hospital bed. Another revealed her cradling her son with her husband.

“We are shocked and in the kind of deep pain you only hear about, the kind of pain we’ve never felt before,” Teigen wrote in the accompanying caption, revealing that she and Legend had started calling the baby Jack. She was 20 weeks along in her pregnancy.

“To our Jack — I’m so sorry that the first few moments of your life were met with so many complications, that we couldn’t give you the home you needed to survive,” she wrote in her heartfelt post. “We will always love you.”

“Driving home from the hospital with no baby. How can this be real.”

In her Medium essay, Teigen discloses that she suffered from partial placental abruption, which is a serious condition in which the placenta separates from the wall of the uterus before birth. She candidly describes bleeding so heavily that she had to wear adult diapers, and that she underwent multiple blood transfusions, but the blood still went right through her. “Even as I write this now, I can feel the pain all over again,” she wrote.

But there has also been a flood of support from parents who aren’t household names. Many shared their own miscarriage experiences.

One woman revealed that she lost a daughter at 20 weeks. And while she tends to “never ever post on this stupid twitter thing,” she felt compelled to let Teigen know that, “I feel your pain, from many miles away.”

Another disclosed that the birthday of her daughter Maya, who was stillborn at 21 weeks, will be this upcoming Monday. “Oh, momma. It hurts,” she wrote under Teigan’s Instagram post.

Teigan said she read every one. “Social media messages from strangers have consumed my days, most starting with, ‘you probably won’t read this, but…’. I can assure you, I did,” she wrote.

Up to 20% of known pregnancies end in miscarriage, which is the spontaneous loss of a pregnancy before the 20th week. That number could actually be higher, however, because many miscarriages occur early in a pregnancy, before a woman even knows that she is pregnant. The Mayo Clinic has more information about miscarriages and complications here — where it also busts myths, such as claims that exercise, sex or working (provided one isn’t exposed to toxic chemicals or radiation) cause miscarriages.

But even though, statistically, up to one in five pregnancies end in miscarriage, it’s still largely not talked about. Jamie Kreiter, a Chicago-based therapist, recently told HuffPost that “I do think that one of the reasons why we don’t talk about this is that we don’t want to scare other women.” Rayna Markin, a psychologist and associate professor at Villanova University, told the media outlet that women also receive “strong messages from society that [miscarriage] details are too disgusting to talk about and should be silenced.”

Because the physical and emotional side effects of a miscarriage can be severe. Some women have to have surgery to remove the fetal tissue. And a study published in the American Journal of Obstetrics and Gynaecology in January found that one in six women who miscarry suffer long-term post-traumatic stress. The U.K. study of 650 women reported 29% of them showed symptoms of post-traumatic stress one month after their pregnancy loss; 24% exhibited anxiety, and 11% had signs of depression. Nine months later, 18% were still showing PTSD symptoms.

So while some readers have questioned why Teigen and Legend would make such a personal loss public, others appreciated that they are shedding light on a traumatic experience that doesn’t get enough attention.

“For too long families — especially women — went through this kind of thing in secret, making more and more people feel alone and sometimes ashamed,” wrote one , adding that “you are so appreciated.”

“So many mothers and families struggle with miscarriages and losing a child. They feel alone,” wrote a male Twitter follower . “Speaking about it at least let’s them know that they are not by themselves.”

Former first lady Michelle Obama wrote in her 2018 memoir “Becoming” that she had suffered a miscarriage, writing, “What nobody tells you is that miscarriage happens all the time, to more women than you’d ever guess, given the relative silence around it. I learned this only after I mentioned that I’d miscarried to a couple of friends, who responded by heaping me with love and support and also their own miscarriage stories.” Beyonce also revealed in Elle’s January 2020 cover story that she had multiple miscarriages before giving birth to daughter Blue Ivy in 2012.

Miscarriages can take an enormous financial toll on a family, as well, with the medical bills causing parents to confront the trauma of the lost pregnancy over and over again. The costs for a procedure called a dilation and curettage (D&C) — which surgically clears the uterine lining after a first trimester miscarriage — runs from $2,400 to upwards of $7,500, according to the Healthcare Bluebook medical-cost site. But while insurance usually covers the cost of a miscarriage, Parents.com warns that there are often large co-pays, or expenses associated with an emergency room visit or an anesthesiologist, that can hit women with surprise medical bills. And keep in mind that some 44 million Americans are uninsured.

What’s more, parents may have to take time off from work to recover from the miscarriage, and roughly 33.6 million Americans, or 24% of U.S. civilian workers, don’t have access to paid sick leave .

One North Carolina woman told Parents that she got stuck with $10,000 in medical bills for her second miscarriage. “We both have good jobs, work full time, and have a normal amount of debt for homeowners, but having roughly $10,000 in medical bills was devastating — especially having to spend so much money and not getting to bring home your child,” she said.

Parents.com has some tips on dealing with the financial fallout of a miscarriage, such as asking doctors about all treatment and procedure options, voicing concerns about the cost of procedures, and finding out whether the anesthesiologists are covered by your insurance. Read more here .

For more resources on miscarriage, Share Pregnancy & Infant Loss Support is a national organization with more than 75 chapters in 29 states.

The Seleni Institute also offers counseling for anxiety and depression centered around pregnancy, including miscarriage and stillborn loss. This Seleni article outlines how to get support after pregnancy loss.

The March of Dimes offers guidance to miscarriage and stillbirths, as well. It includes resources on dealing with grief, physical and emotional recovery, and how to work through feelings about getting pregnant again or not.

This article was originally published on Oct. 1, and has been updated with Chrissy Teigen’s essay.