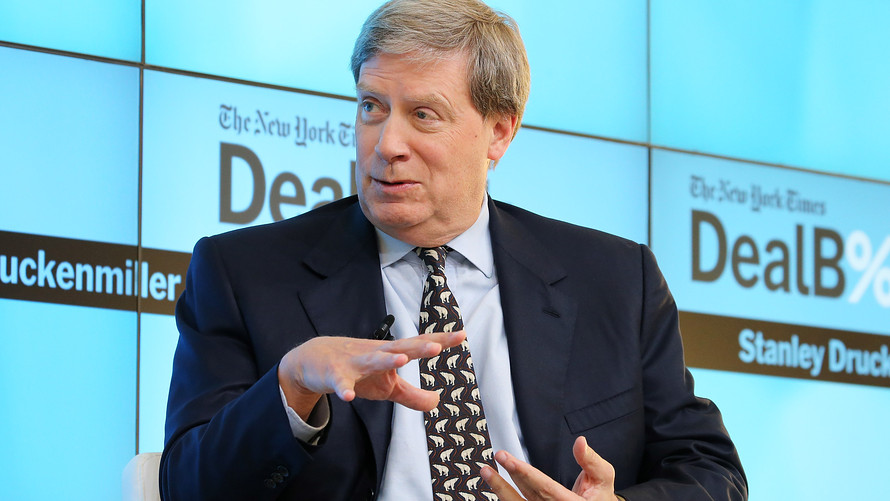 Stanley Druckenmiller has seen a crisis or two in his storied career.

The famed former hedge-fund manager, who with George Soros famously broke the Bank of England by shorting the pound in 1992, says “the risk-reward for equity is maybe as bad as I’ve seen it in my career.”

Speaking at a webinar run by The Economic Club of New York on Tuesday night, the chairman and chief executive of Duquesne Family Office says it is just not true that it is profitable to be on the side of the Federal Reserve, which has cut interest rates to nearly zero, swelled its balance sheet and initiated several emergency lending programs. He thinks stocks are at high multiples given the uncertainty of the current environment and looming bankruptcies.

All that said, he does concede the wild card to the market is that the Fed could step up its asset purchases. Druckenmiller says he doesn’t understand the point of negative interest rates, which last week briefly became the market expectation in futures markets. A number of Federal Reserve officials — including Cleveland Fed President Loretta Mester on Tuesday night — have said they are reluctant to set negative interest rates.

Druckenmiller says it doesn’t make sense that financial markets surge on news about the Gilead Sciences /zigman2/quotes/210293917/composite GILD +0.14%  intravenous anti-COVID-19 drug remdesivir. “I don’t see why anybody would change their behavior because there’s a viral drug out there,” he said.

Druckenmiller also revealed he’s a big fan of Amazon /zigman2/quotes/210331248/composite AMZN +2.21% , saying he gets emotional when the online services giant is attacked.

The focus is on Federal Reserve Chairman Jerome Powell, who is discussing the economy at a webinar run by the Peterson Institute for International Economics . Powell in a prepared speech said the central bank would be prepared to use “additional policy measures” if needed. He also told Congress more fiscal policy boosts would be “costly but worth it if it helps avoid long-term economic damage and leaves us with a stronger recovery.”

As Fed officials continue to bat away the possibility of negative interest rates, the European Central Bank on Wednesday released a publication defending them, saying the boost to lending volumes and the creditworthiness of households offsets the negative impact on bank profitability.

U.K. gross domestic product fell 2% in the first quarter, the worst showing since the financial crisis.

Shipping giant A.P. Moeller-Maersk said volumes in the second quarter may fall as much as 20% to 25%.

Twitter /zigman2/quotes/203180645/composite TWTR -0.04%  Chief Executive Jack Dorsey told his employees on Tuesday that many of them will be allowed to work from home in perpetuity, according to BuzzFeed .

In the currencies market, the kiwi /zigman2/quotes/210561822/realtime/sampled USDNZD -0.1137%  dropped as the Reserve Bank of New Zealand said negative rates were an option. 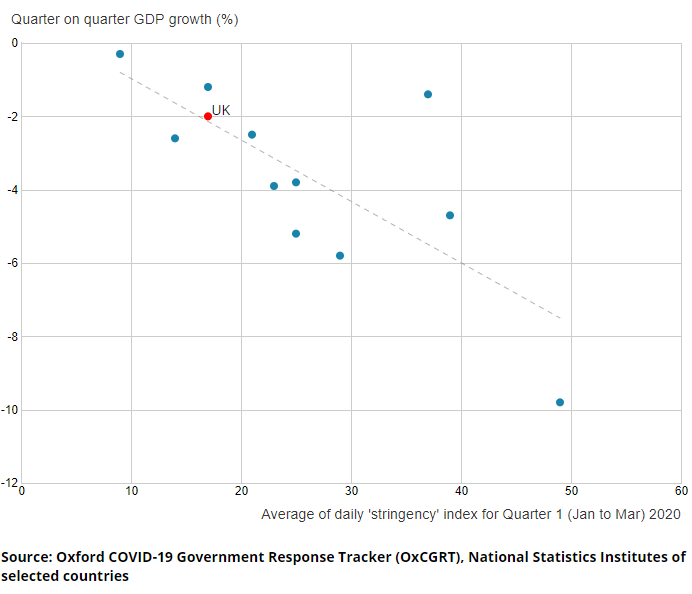 The U.K. Office for National Statistics composed a fascinating chart, showing first-quarter GDP as a function of how stringent lockdowns are. (The U.S. dot is just to the top of the U.K., and China’s dot is in the bottom right.) They used Oxford’s COVID-19 Government Response Tracker to measure lockdown strictness. For more interesting charts on the U.K. economic numbers — including the spike in toilet paper demand — see this story.

The Federal Bureau of Investigation accidentally revealed the name of a Saudi official suspected of directing support for the 9/11 hijackers.

Meet the 102-year-old Icelandic woman who survived the Spanish flu and COVID-19 .