With oil prices rallying sharply since the end of last year, it would be natural to expect energy-sector stocks to be tearing the roof of the market. But they’re not — and investors are starting to notice.

Since the end of last year, both oil and the stock market have come roaring back from a steep fourth-quarter selloff. Energy-sector stocks have outpaced the S&P 500’s (S&P:SPX)  strong gain of nearly 15% in the year to date. The sector-tracking Energy Select Sector SPDR exchange-traded fund (PSE:XLE)  is up nearly 17%.

But the sector’s performance is viewed as rather underwhelming, compared with an oil rally that has seen futures on the U.S. crude benchmark, West Texas Intermediate , soar more than 40% in the year to date.

The J.P. Morgan analysts noted that while oil had recovered around 60% of its fourth-quarter drawdown through late last week, large-capitalization exploration-and-production, or E&P, firms were still down 25% since Oct. 31, while small-cap E&Ps were off 53% (see chart below). 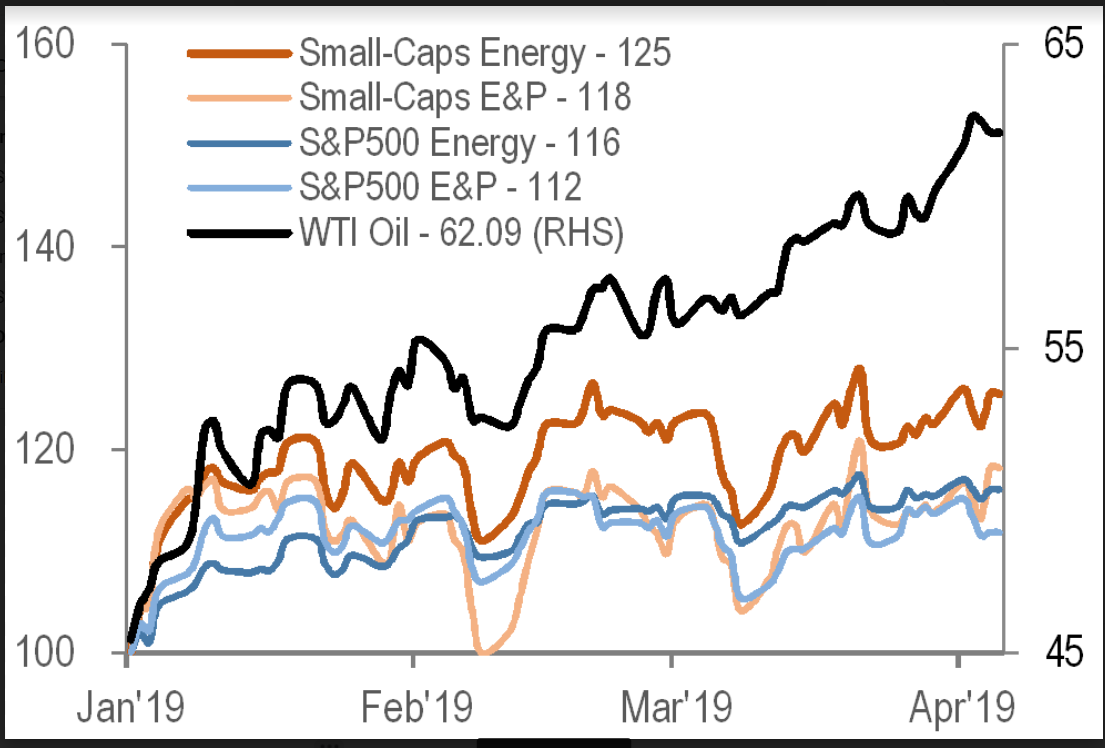 That’s unusual. The analysts note that the E&P’s Index Price to Oil ratio is at a record low and sits below its previous troughs. They also observed that in recent periods when oil traded near current levels, the S&P 500 energy sector traded around 7% above where it is now, while the small-cap oriented S&P 600 energy sector was around 30% higher.

While the energy sector has outpaced year-to-date gains for the S&P 500, the energy sector accounted for around 5.5% of the large-cap index at the end of last week. That’s also very low on a historical basis, analysts have noted. Since 2010, energy has averaged a 10.4% weight in the S&P 500, with a standard deviation of 2.3 percentage points, noted Nicholas Colas, co-founder of DataTrek, in a note last week. Since 2000, the average weighting has been 9.6%, with a standard deviation of 2.5 points.

“There’s much skepticism among investors” over energy shares, which is reflected in the discrepancy between the year-to-date gains for WTI and the energy sector, said Terry Sandven, chief equity strategist at U.S. Bank Wealth Management, in a phone interview.

In part, that reflects worries over global growth, Sandven said. After all, a tepid global growth environment doesn’t bode well for future energy consumption. Much of oil’s rally has been attributed to supply concerns, with the Organization of the Petroleum Exporting Countries, or OPEC, and its allies moving to curb output. The effect of those efforts on supply have been exacerbated by sanctions on Venezuela and Iran as well as a U.S. shale industry that has been slow in responding to the rebound in prices, analysts said.

Read: Why the oil rally is more about U.S. shale than Saudi Arabia’s output cuts

At the same time, the focus on the year-to-date performance of energy shares relative to oil might be off the mark, Sandven said. Over the longer term, oil prices and the energy sector tend to move more closely together. And indeed, over the past 12 months, the gap between the two is much smaller, with WTI up 0.8% and the energy sector off by around 0.8%.

Need to Know: Oil rally gets no buy-in from this commodity analyst

And U.S. Bank looks for a “moderate level of global growth” that can sustain oil prices near current levels, that means some catch-up is in store when it comes to spending, which should be a positive for the energy sector, he said.

The sector’s first-quarter performance, which has seen it still outperform the S&P 500 over the same stretch, comes against downbeat earnings expectations for the first quarter.

Consensus expectations are for the sector to post a 20.9% drop in earnings year-over-year, the second-weakest any sector after materials stocks, noted Sam Stovall, chief investment strategist at CFRA, in a Monday note.

Stovall noted that while the crude-oil market’s rebound has been strong, WTI crude still averaged just $55 a barrel in the first quarter, which is 13% below where they were a year earlier. Natural-gas spot prices were also 5% lower, while natural-gas liquids also languished.

“So for an upstream producer, unless you hedged early at higher prices, there’s really been no place to hide,” he said. “Meanwhile, the outlook for oil services also appears weak as producers seem to be reining in their pocketbooks.”

Colas sounded a cautious note. He acknowledged that the sector’s low weighting relative to its long-run history would normally make him bullishly “pounding the table on that statistic alone,” but argued that “this is a tougher call than just saying ‘the group’s weighting in the S&P 500 is half of what it should be, so buy it.’”

The problem, he said, is likely technology — both when it comes to the production of carbon-based energy and in the development of alternatives.

“In the former case, it allows for greater production. In the latter, it makes for competition in the form of new energy sources,” which Colas said reinforces his frequent warning that the “technology investment narrative can easily trump old-school ideas like valuation.”

But he argued that because the group is so cheap, underweighting energy is risky because any reversion to its long-run weighting would be difficult to make up elsewhere. And while overweighting is “tempting,” the upside seems limited.

So what’s an investor to do? Colas’s advice was to “even-weight the group against whatever benchmark you use.”