Why ‘King Dollar’ is back

Trashing the U.S. dollar is the favorite pastime of a whole cadre of gloom-and-doom investors. Soaring U.S. deficits, subpar economic growth, and threats from rising economic superpowers like Brazil, Russia, India and China (the BRICs) have even led to calls for replacing the U.S. dollar as the world's reserve currency.

The "doom and gloomers" may turn out to right over the long run.

Yet, over the past quarter, the U.S. dollar has been in a monster rally. Last Friday, the U.S. Dollar Index — which tracks the greenback against a basket of major trading partners' currencies including the euro, Japanese yen, British pound, Canadian dollar, Swedish krona and Swiss franc — hit a four-year high. The U.S. Dollar Index spiked over 7% in just the third quarter, alone. In fact, the Greenback's rise over the past 11 weeks has set a record for consecutive weekly gains not seen since Richard Nixon took the U.S. dollar off the gold standard.

The dollar's move has been particularly strong against both its major rivals: the euro and the Japanese yen. Just look at the performance of the PowerShares DB US Dollar Bullish ETF /zigman2/quotes/209727862/composite UUP -0.27%  over the past three months. 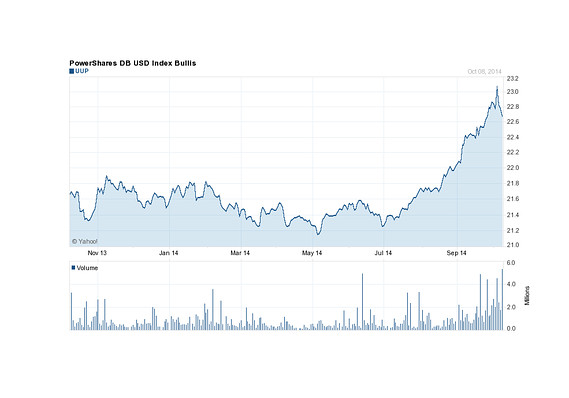 So what accounts for the U.S. dollar's recent parabolic rally?The answer is as simple as it is perhaps surprising: The U.S. dollar is rallying thanks to good news about the U.S. economy.

First, recall that U.S. gross domestic product (GDP) grew by an annualized rate of 4.6%. That was huge turnaround compared with the contraction of 2.1% during the first quarter. While it's doubtful the U.S. economy kept up the second quarter’s torrid pace in the third, the consensus estimate is still for GDP growth north of 3%. Throw in an improving current-account deficit and headline unemployment numbers dropping to 5.9%, and you can see why U.S. dollar investors are bullish on the buck.

Second, currency investing is all about relative valuation.

Or as the inimitable George Soros put it in his uniquely turgid style: "Investing in currencies is an existential choice."

Sure, market pessimists can write books on how the U.S. economy is going to hell in a hand basket, and that government statistics are fudged. That does not change the perception that the U.S. economy is the best of a bad bunch. That alone is enough to boost the greenback.

After all, what other currencies are you going to put your money into?

Major eurozone economies like France are in recession, and even its economic engine, Germany, is slowing. The European Central Bank (ECB) is just about to launch its own version of quantitative easing (QE) just as the U.S. Federal Reserve winds down its own efforts. No wonder the euro lost nearly 4% against the dollar in September alone. Morgan Stanley now expects the euro to fall to $1.15 by the end of 2015 — just about a 10% drop from current levels.

Meanwhile, Japan is intentionally pushing down the value of the yen; it hasn't traded this low since late 2007.The BRICs are fraying at the edges. Brazil and Russia are both in recession. China is struggling to maintain its economic momentum. India is the sole exception, with both the stock market and the rupee on a solid uptrend since May.

With 2014 proving to be a tough year to make money, it's little wonder that investors are jumping on the bullish buck bandwagon. Long struggling managed futures funds that invest in currencies had a solid September even as the rest of us suffered.

But is the dollar trade becoming too one-sided?

HSBC predicts that the U.S. dollar will be the world's strongest currency both this year and through 2015. Even a 20% rise in the dollar could be in the cards. When the likes of Morgan Stanley and HSBC jump on the same bandwagon, I start to worry. It's often then that the market does an about face, leaving latecomers with egg on their face.

That said, the US. dollar has an ace in the hole.

Because currency investing is a relative game, and the U.S., for all its faults, is still the bedrock of the global economy. As a result, the U.S. dollar tends to soar even as other risk assets fall. That's what happened in 2008 at the height of the financial crisis. That is what is happening during the recent market mood swing.

So think of investing in the U.S. dollar as a hedge against all your other risky assets.

If the current correction is indeed the start of a sustained correction, the flight to the U.S. dollar will continue. Even if markets do rebound, there are still other solid reasons to expect the "King Dollar" rally to continue.