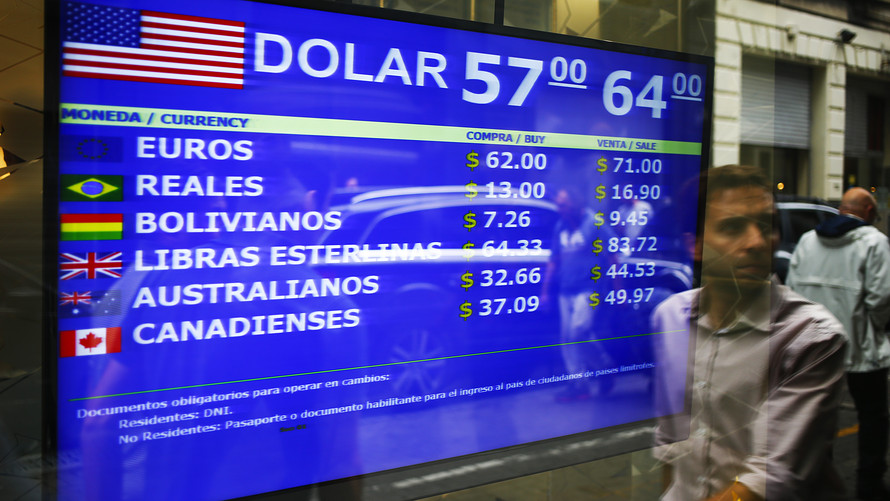 Getty Images
Argentina’s central bank restricted the limit for dollar purchases to $200 a month by bank account and $100 cash until December, versus a previous limit of $10,000, in an effort to protect the country’s dollar reserves.

The pro-market Macri on Sunday night conceded defeat to a leftist opposition ticket headed by longtime political insider Alberto Fernandez and his much more well-known, and controversial, running mate, Cristina Fernandez de Kirchner, a former president and Macri’s predecessor. The government on Monday tightened capital controls in an effort to preserve its foreign-currency reserves, The Wall Street Journal reported .

But analysts have noted that concerns around Argentina have remained largely contained—and some expect that to remain the case.

“Even if Peronists sweep to power in Argentina again, and protests rumble on elsewhere, there are reasons to think that the MSCI Latin America Index as a whole will hold up better than some of its regional peers in the next year or so,” said Oliver Jones, senior markets economist at Capital Economics, in a Friday note.

Fernandez was heavily favored to win. A much stronger-than-expected showing over Macri in the August primaries sent shock waves through financial markets, sending the Argentine peso and equities tumbling.

The pro-market Macri won election in 2015 with a promise to revamp the country’s economy. But those efforts were derailed in 2018, when crisis struck and Macri was forced to seek out a $57 billion loan from the International Monetary Fund. A deep recession and soaring inflation have plagued the economy, with gross domestic product on track to have shrunk by 3.4% by the end of Macri’s term and inflation set to total 240%, according to the Brookings Institution .

The MSCI EM Latin America index is up nearly 9% so far in 2019. In fact, the Latin America Index rose more than 3% last week, despite the looming Argentine election, protests in Bolivia, and a breakdown in talks in Ecuador that had helped to end earlier antiausterity demonstrations, Jones noted. Chile has been racked by strikes and mass protests as well.

The buoyancy of the MSCI EM Latin America index is no mystery, Jones said. Bolivia and Ecuador aren’t included in the benchmark index, while Argentina’s share is less than 2%, he noted (see chart below), while Chile’s stands just a bit larger at 8%. The heavyweights are Mexico and Brazil. And Brazil has seen relatively little unrest given the scope of a pension overhaul pushed through, against the odds, by the administration of Jair Bolsonaro, Jones said. 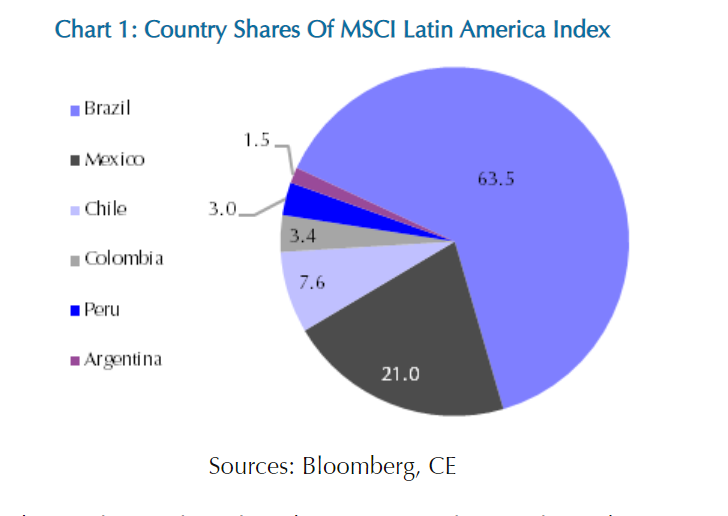 “As far as the outlook is concerned, we think that there could be yet more pain to come for Argentine assets following a Fernández-Fernández victory in the election,” he said. “And it is fair to say that a lot of good news on President Bolsonaro’s broader economic reform agenda in Brazil is already discounted. But even allowing for that—plus the possibility that the protests in the Andean economies continue—we think that the MSCI Latin America Index will not fare as badly as its EM Asian counterpart.”

The MSCI EM Asia Index rose 0.8% last week and is up 7.4% so far this year. It’s more vulnerable to any escalation of the U.S.-China trade war and the further slowdown expected for China’s economy in coming quarter, Jones said.

Get news alerts on Argentinian Peso and Global X MSCI Argentina ETF — or create your own.