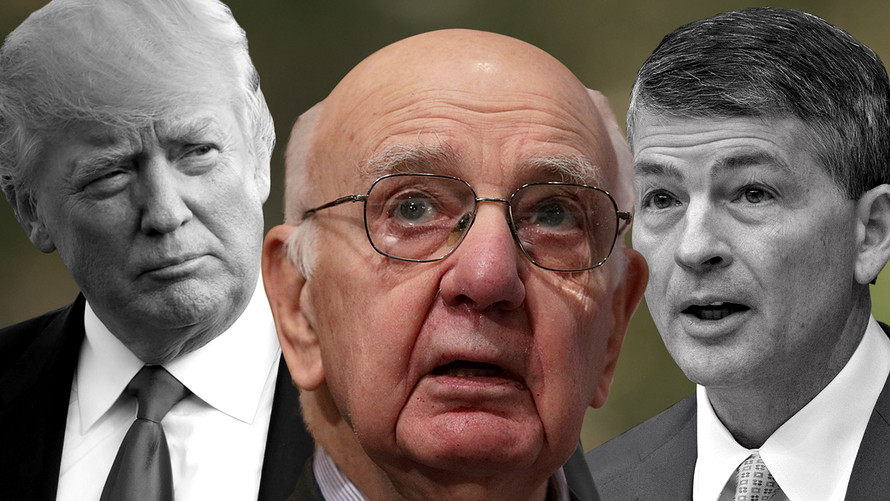 After 65 years keeping an eye Wall Street, Paul Volcker knows a pivotal moment when he sees one.

President Donald Trump’s first 100 days has given Wall Street bankers hope that they will be able to roll back the 2010 Dodd-Frank law that strengthened Washington oversight of the financial industry. Trump himself said he wanted to “do a number” on the bank reform law.

But standing in the way is Volcker, the man who “whipped” inflation in the late 1970s and early 1980s as Federal Reserve chairman. Now, Volcker is mounting a vigorous defense of the law that he helped shape as chair of President Barack Obama’s economic recovery advisory board, even lending his name to the so-called “Volcker Rule” which places limits on hedge fund and private equity participation as well as proprietary trading for banks.

Volcker, who is 89, returned to Washington for a rare speech in mid-April to rally those eager to sustain the reforms.

“In the event of a major financial crisis, there is no possibility of an international ‘bailout’ of the American financial system,” he warned. “So we had better work to keep it strong.”

Not only is he mounting a strong defense of the Volcker Rule and Dodd Frank, Volcker is putting forward a new plan to revamp the alphabet soup of federal regulatory agencies that oversee the financial sector.

Read: Volcker to Trump: If you want to be useful, rationalize crazy U.S. financial regulatory system

In an edited interview for MarketWatch’s series of interviews in the Fed’s blackout period, the former Fed chief explained how the Volcker rule could be enforced and how his views on regulation stem from his earliest days as a banker when World War II and the Great Depression were fresh on everyone’s minds.

House Finance Services Committee Chairman Jeb Hensarling just put out his legislation to roll back the Dodd-Frank banking regulations and the Volcker rule.

Oh, that would be a bad idea. I don’t know it in detail, but he has a whole sweeping, different approach to banking regulation. It is worth looking at Dodd-Frank to see where it can be strengthened in places or made simpler. That would be very desirable. And some elements could get left out. But just beginning by dismissing Dodd-Frank, which fits pretty well into the international climate and regulation, would be a big mistake in my view.

Read : Hearing on GOP plan to overhaul Dodd-Frank set for next week

The resolution process has become a matter of controversy for reasons I don’t fully understand. Liquidation means you sell off pieces of it, maybe you can sell off the whole thing, sell off the whole carcass. But the stockholders would be gone, the management would be gone, creditors, at least unsecured creditors, would be at risk. There is a point of confusion I think as to the implication of the fact that I guess the FDIC could put some money in to maintain continuity of the daily operations of the money market. That’s to provide a kind of sense of confidence in the market that you’re not going to have a huge run and other institutions will fall like 10 pins, not because they are weak but because fears of an extended run. But that limited injection of capital would be paid back. So I don’t think there is any risk of any loss to the FDIC or any other government agency. I do think the FDIC is the right organization to handle this. It is their raison d’etre.

What about ideas to go back to Glass Steagall?

We can go back to Glass Steagall, I guess, if we want to. One thing I would warn against is if these proposals, these murmurings about going back to Glass Steagall — if they mean that the big investment firms will escape oversight, I don’t think that would be a wise thing. If you want to adopt Glass Steagall, I guess you can do it, but Goldman Sachs /zigman2/quotes/209237603/composite GS +0.36%    and Morgan Stanley /zigman2/quotes/209104354/composite MS -1.07%   and whatever are obviously significantly important for the international financial system and would have to have the same kind of oversight that they now have.

What about the Volcker rule? You seem to suggest it was simple in Dodd Frank and then the regulatory agencies made it complicated.

It was not all that simple in Dodd Frank, although the actual law is fairly short, they had a lot of descriptive material too. I say two things. The adoption of the Volcker rule happens to be a good example of the archaic regulatory structure in the United States. The law says “adopt it” and [five agencies] all have to adopt it, and they do it under the aegis of FSOC and none of them really wanted to get very involved, I guess. They didn’t want to agree and they were picking away at every proposal that was made by each of the five. To get them all on one page took five years. It is a very complicated page, understandably. When you get five agencies and 5,000 lobbyists you’ve got a problem.