Why raising taxes on the rich isn’t so crazy 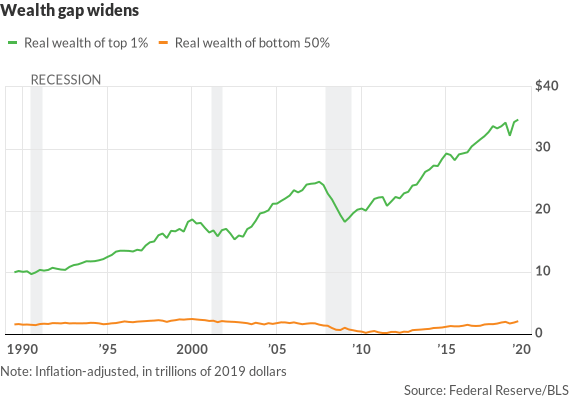 Unemployment is low and the stock market is high, but most Americans aren’t getting ahead. Half of American families have less real wealth than their parents did 25 years ago.

Democrats are not satisfied with the economy.

That’s why some Democrats, both moderate and on the left, are proposing higher taxes on the wealthy not only as a way of financing new spending on social programs and a Green New Deal, but also of redistributing some of the wealth that the richest families are essentially just sitting on.

Why it would be good

Imposing higher taxes on the rich would actually help the economy grow faster , Democrats say. That’s contrary to decades of Republican trickle-down orthodoxy that has made the total tax burden in the U.S . lower than just three other developed nations — without delivering the economic jolt that was promised time and time again.

It’s not just Sens. Elizabeth Warren and Bernie Sanders who favor taxing the rich, hitting roughly one of every 500 people. Even mocked-as-a-moderate Joe Biden proposes large tax increases on the rich if he’s elected president. (Keep in mind that President Obama also wanted to tax the rich more, but he couldn’t get Congress to go along, even though taxing the rich polls very well. Other Democrats may get the same result.)

Many Americans feel that the system is rigged against them. Prices for necessities such as health care, day care, education and housing are rising faster than incomes.

The economy would benefit directly from a more equal distribution of income because middle- and low-income families spend a greater portion of their incomes than the very rich do, so more money would recycle through the economy. The economy would also benefit if everyone could take advantage of the opportunities that are presently hoarded by the rich. How many great leaders, thinkers and inventors never got the chance?

Social class, wealth and political power are inherited from our parents and grandparents to a shocking degree.

Inequality of wealth creates other problems. The top 1% are socking away a greater share of the nation’s wealth; so much so that regular Americans are starved for the capital they need to buy homes, invest in schooling and start new businesses. The poorest half of Americans have only 2% of all wealth, half as much as their parents had 25 years ago. Meanwhile, the share owned by the top 1% of families has soared to 32%.

The federal government — which might invest more to fight climate change, to build infrastructure and to restructure health care, day care and education to make them more affordable — is also starved for resources.

There are many objections to taxes that target the rich. Read this comprehensive debunking by law professors Lily Batchelder and David Kamin.

Most fundamentally, some people say, taxes on wealth would destroy capitalism, or at least slow the growth rate. A wealth tax would reduce incentives for entrepreneurs and thus kill innovation and technological progress, they argue. It would punish success.

Higher taxes would be unfair, they say. We’ll always have poor people, so why buck human nature?

Furthermore, some critics say imposing a wealth tax would be futile, because the rich have the means to escape any tax, by moving their assets abroad, hiding them, or employing innovative lawyers, accountants and lobbyists to create and take advantage of loopholes.