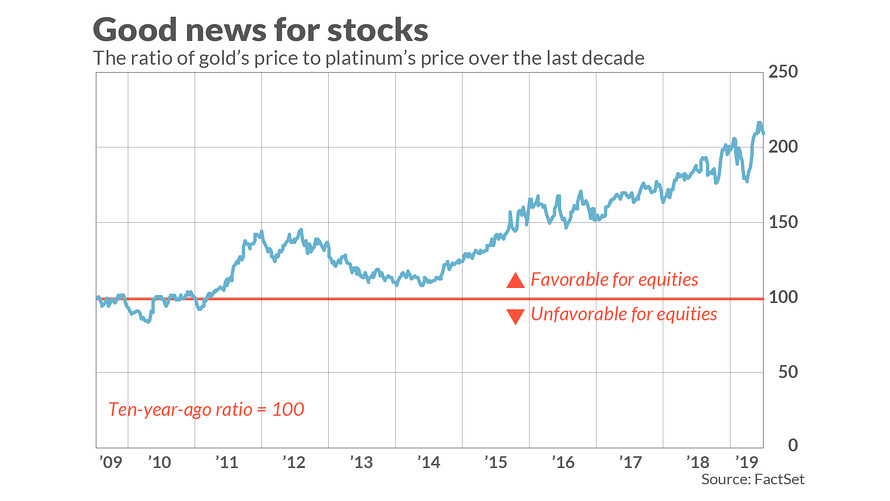 The surprising forecast of the gold-platinum ratio

CHAPEL HILL, N.C. — This incredible bull market in stocks is getting support from a most unlikely source: The ratio of gold to platinum.

You could be excused for thinking that gold  (PSE:GLD)   and platinum  prices have little to do with the stock market, much less the ratio of the one to the other. But researchers have found that this ratio has a better track record than many of the more widely known valuation metrics that get the lion’s share of investor attention.

Consider an academic study by Darien Huang, a former finance professor at Cornell University, and Mete Kilic, an assistant professor of finance and business economics at the University of Southern California. They found that the gold-platinum ratio is a good stock market predictor; a falling ratio is bad news for equities, while a rising ratio is bullish.

As you can see from the accompanying chart, the ratio has been rising steadily and is now at its higher level in over 10 years. Furthermore, the ratio is up 14% over the 12 months since I last wrote about it. The S&P 500 index (S&P:SPX)   over the same period produced a total return of 13.2%.

Why would the gold-platinum ratio be able to forecast the stock market? In interviews when his research first came out, Huang explained to me that it has to do with the different factors that influence the prices of these two metals. Platinum primarily reflects industrial demand, while gold’s price reflects both industrial demand as well as investor demand for a hedge against economic and geopolitical trouble.

So when the ratio is rising, as it has in recent years, investors collectively are anticipating a rising level of risk. Equities must deliver a higher-than-average expected return as compensation for that higher risk.

You might find it hard to square this hypothesis with the length of the recent economic recovery, which is now the longest in U.S. history. At least in retrospect, it certainly doesn’t seem as though there has been a higher-than-average level of risk.

But note carefully that the absence of bad outcomes doesn’t mean that risk wasn’t high. Another word for risk is uncertainty, and I imagine that most of you would agree that the economic recovery over the last decade has been anything but certain.

So the proper way of interpreting the message of the gold-platinum ratio over the last several years is this: The stock market would have been even stronger if it hadn’t been for investor concern and anxiety. The expectation now is that some of that foregone strength will materialize in the coming year.

There are of course no guarantees. But Kilic and Huang did find that, at least since 1975, the gold-platinum ratio has had a significantly better track record than nine other well-known indicators that researchers previously found to have predictive ability—including, prominently, the Cyclically-Adjusted PE Ratio, or CAPE, made famous by Yale University (and Nobel laureate) Robert Shiller.

What makes this finding particularly noteworthy is that many of those other indicators are either bearish or extremely bearish right now. The gold-platinum ratio is one academically-supported indicator that is telling a bullish story.