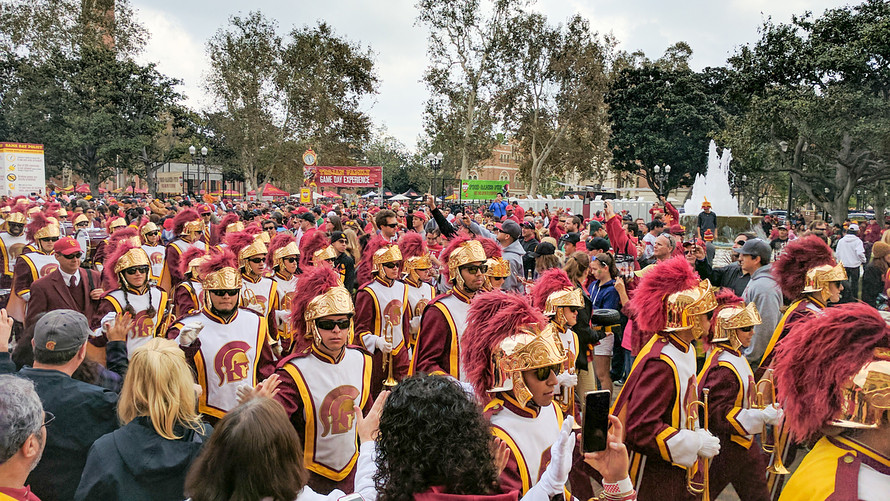 Getty
The USC Marching Band marches down campus on their way to the Los Angeles Coliseum before a football game.

It’s been a tough week for the entitled.

After prosecutors this week announced the “largest college admissions scam ever,” gasps from the 1% could be heard all the way from Bel-Air to Greenwich, while sarcastic gasps could be heard from everybody else.

But lest you think that this too shall pass as just another inconsequential chapter in the privileged lives of the elite, author and tech investor James Altucher says this scandal could result in “the death of a nation.”

‘The beginning of the end: Successful famous people are using money to buy their kids into college.’

That’s the premise of Altucher’s latest post , in which he lays out “the deeper societal impact” of the scam.

Essentially, he says, “unqualified but dishonest kids” take the top spots, marry other kids doing the same and then pass on their mediocre genes.

Meanwhile, Altucher predicts, the deserving kids get relegated to subpar schools and take on more debt that will have to be repaid with money and time that could have gone toward innovation.

“Income inequality spreads. Dumb, rich people get richer. Smart, poor (or smart, honest, rich) people get poorer,” Altucher explained. “This is not a rich vs. poor thing. I want the first tier kids to get RICH beyond belief. I want them to cure cancer and make $100 for every person they cure. I want them to create stem cell meats and get $1 for every hydroponic steak sold. But they won’t.”

Instead, he says, they’ll end up in midlevel management at Procter & Gamble /zigman2/quotes/202894679/composite PG +1.15%  and their kids will be at janitors with community college degrees.

“Nothing wrong with that,” Altucher wrote. “But when there is income inequality like this, people get angry without understanding the reason. This is what creates the extremes at each side of a relatively centrist country.”

Don’t believe for a second that this is the end of it, he warned, saying those singled out in “Operation Varsity Blues” are just the tip of the iceberg

“My guess is there are thousands of parents or more sweating it out this morning,” he said. “We’ll never find all of them. And the system will create more quiet techniques for cheating and the brave, rich, and deceitful among us will find more clever ways to get their kids advantages.”

This kind of story ends in one of two ways, he says: war and plague. “Think of every great empire from Rome to the United Kingdom that ultimately disintegrated into its excesses after massive income inequality,” Altucher said.

He did, however, offer these solutions to “save the world”:


Altucher admitted some of those sound rather harsh.

“I don’t care if their competitors are smarter than them or come from rich families,” he concluded. “I care that they cheat. And cheating makes anxiety levels of all other teenagers go up, causing mental and physical health challenges later in life, not to mention the income inequality mentioned above.”