Wage gains are being eaten up by higher inflation, interest rates 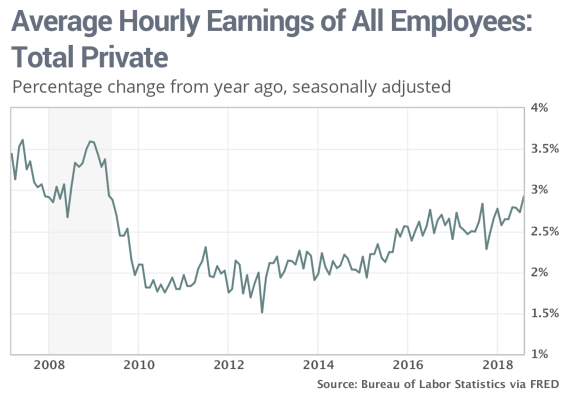 Hurray. American workers are finally getting bigger pay raises. Unfortunately, rising inflation is eating up a lot of the extra cash and will lead to higher borrowing costs on mortgages and car loans.

The amount of money paid per hour to American workers rose in August to a yearly pace of 2.9% — the highest level since the end of the Great Recession in mid-2009.

Even better, wage gains are likely to top a 3% annual clip before the end of 2018, reflecting an ultra-low unemployment rate that has forced companies to offer higher pay in the scramble for talent. The jobless rate stands at an 18-year low of 3.9% and economy is experiencing the fewest layoffs in almost 50 years.

It’s been a long time coming. Wages rose about 2% a year from 2010 to 2015 and only started to climb a few years ago. Normally they rise 3% to 4% a year when the economy is running at full tilt.

The news is not all good, though.

For one thing, the rise in wages has been accompanied by an increase in inflation. The consumer price index used to measure the cost of living has also risen 2.9% in the past year.

The Federal Reserve, however, prefers another inflation measure known as PCE that it views as more accurate. The PCE also shows rising inflation, but it’s grown about 2.3% in the last 12 months.

Whatever the case, the fact is that higher inflation has robbed most workers of the full benefits of better pay.

Then there’s the matter of U.S. interest rates. Whenever inflation rises, the Fed increases rates. And that means individuals and families have to pay more to borrow money to buy a house, get a new car or replace an old appliance.

The central bank is expected to raise rates at the end of September and many economists think the uptick in wages in will probably trigger another rate hike in December.

“One month does not make a trend, but we do see this report as containing nascent evidence of faster growth in wages,” said senior economist Michael Gapen at Barclays.

“The firming in wages, if it is sustained, is potentially far more meaningful than a blowout jobs number or a drop in unemployment,” he said.

It’s hard to see how wages fail to keep rising.

Executives in a wide array of industries complain about a shortage of skilled workers and difficulty filling millions of open positions. They’ve tried to hold the line on pay and attract workers through other means such as better benefits, but better wages has become an increasingly bigger lure.

“The labor market may have reached a point where limited labor supply is finally starting to put meaningful upward pressure on wages,” Bank of America/Merrill Lynch economists said.

The bigger question is how much that affects broader inflationary trends. Inflation has risen mostly because of higher rents, gas prices and medical care.

So far labor costs have not been a major part of the equation, and if productivity increases, companies would be able to pay more without contributing to inflation.