Why you should like gold, but not the gold miners 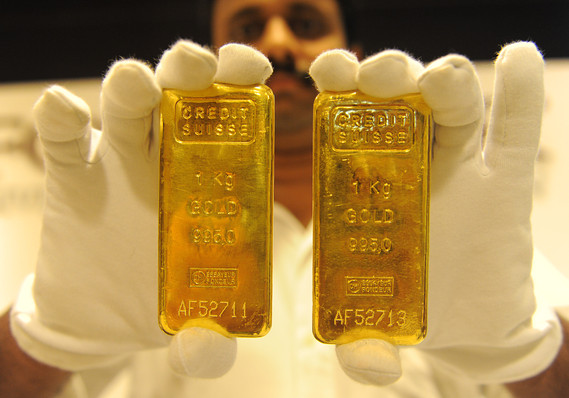 Gold is sure acting like it's trying to break out.

With so many other commodities crushed, the strength in gold could become a self-fulfilling prophesy as money managers look for a place to get some commodity exposure, making gold-miner-stock multiples expand ever faster. We don't have to invest in any commodity, but if I had to own a commodity, I'd want to own gold. And I do own gold coins and bullion, but no gold-miner stocks and no gold ETFs. There are reasons for this.

Why not gold miners?

Marketwatch favorite and one of my own favorites, too , Kevin Kerr, and I got into a discussion about the gold miners on Thursday when I wrote : " I'm concerned that EVERY miner stock I check has billions of dollars of debt and needs gold to stay here or go higher to pay it off. I'd rather own gold coins than gold miners."

Silver miner Silver Wheaton , has $1.5 billion in debt and $100 million in cash. It sounds like a leveraged-up way to bet on silver getting to $25 or $30 so they can make enough money to service/pay back that debt and earn some profits for shareholders. I'm not interested in an overleveraged silver-miner stock, personally.

The same goes for Goldcorp , which has billions of dollars of net debt. Specifically, I wouldn't want to bet on the gold miners, most of whom have terrible balance sheets which makes me uncomfortable in giving you a long-term bet, since I don't believe it's good risk/reward on the premise.

Kevin wrote back : " Hey, Cody, yeah, this is not going to be a straight shot higher for gold, or silver for that matter, although I like it better. No, we are in this range for awhile. We see $20-$25 down days followed by $20-$25 up days. I think the debt issue you raise for many of the miners is well taken. They have a lot of that to mop up, and I think we see further consolidation. I think the floor for gold is more like around the $1180 level."

Why they ‘need’ the price of gold to go back up

There's a real lack of profitability at the gold miners if gold were to fall back near $1100 again. At $1300 an ounce, they can make some cash and pay their debt obligations. At $1500, they can really start to make some money for shareholders. Because of the debt they carry, investors are basically betting that gold will rise back to $1200 or higher in the next few months so these companies can at least survive.

I think the price of gold is going to stay/head higher, at least for a while. But if gold drops to $1100 again, my gold coins will be down 12% from their current levels, and the gold-miner stocks would likely be down 50%-80% from current levels, and some would be wiped out. Gold-miner stocks have too much debt in general for me to want to risk buying them, but they are a high-beta way to play the price of gold itself.

Where ETFs fit in

What about just buying some precious-metal ETFs so you don't have to handle the physical stuff?

Obviously, everyone loves touching and looking at physical gold, so there’s that. But I'm not a fan of precious-metal ETFs, other than using them for a short- to mid-term timeframe. I think at some point, the major precious-metal ETFs won't be able to deliver all the promised physical metal that they purportedly represent.

If you want to bet on the price of gold or silver for the next three weeks, months or one year, the SPDR Gold Trust /zigman2/quotes/200593176/composite GLD +0.36%  or the iShares Silver Trust /zigman2/quotes/205744453/composite SLV +0.78% are decent ways to do that. If you want to hedge your portfolio with silver for the long-term risks of currency devaluation and financial disruption, then, of course, only silver coins and a little bullion are the way to go.

We learned in 2008's financial crisis that paper promises from banks aren't worth the paper they're printed on when the you-know-what hits the fan. So if you're using GLD and SLV and other paper-promise precious-metal ETFs as hedge against economic/financial crises, then it sort of defeats the purpose.

What are the near-term and long-term outlooks for gold?

That's just about exactly how it played out since then, as gold dipped near $1050 in a panicky selloff after the Fed finally raised rates a bit.

Now? I wouldn't be shocked at pullback of 5% in gold near term, frankly, but the path of least resistance for gold for the next few months and next few years — and especially the next few decades — is higher.

The tipping point for a major spike of 20%-30% or more in the price of gold is if/when the Fed formally moves to an easing cycle again, which I expect to see sometime in the next few months. Long-time readers of mine will recall when I've been bearish and even short precious metals. So, this might come as a shock to them. I expect to see gold revalued five- or even tenfold in my lifetime.

With the Central Bank and Corporatist governments that run every major developed economy doing everything they can to devalue their fiat currencies, I do think gold is headed higher over the next five years, maybe even to $2000 per ounce over that time frame. But that's not something I'm trying to game. I just own my gold coins and bullion and expect that someday before I do in the next, say, 50 or so years, they will be worth five to 10 times what I paid for it.

Finally, here's a must-read debate from a roundtable of professional and armchair gold experts full of analysis and insights about ETFs vs. gold coins vs. gold miners vs. the U.S. dollar. You can get more on the subject with a free copy of my ebook called "Everything You Need to Know About Investing in Gold and Silver" by just emailing .