Will $70 trillion in cash wake up the stock market?

Simon Maierhofer is the founder of iSPYETF and publisher of the Profit Radar Report. Investor’s Business Daily once wrote that: “Simon says and the market is playing along.” Simon analyzes technicals, proprietary supply and demand data, sentiment and seasonality to spot low-risk or high-probability ETF setups. He has been featured on: CNBC, FOX News, the Wall Street Journal, and many other financial-news outlets. 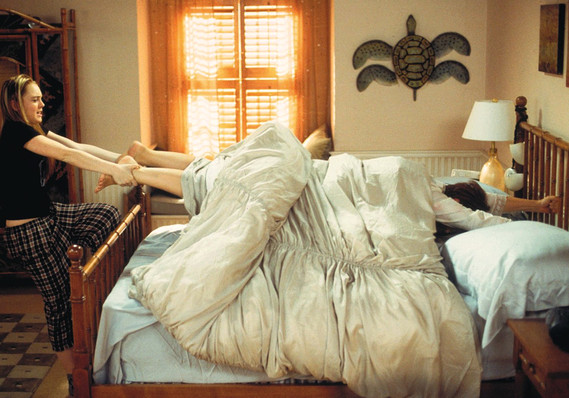 Worldwide, investors have stashed away $70 trillion in cash, according to BlackRock's president Rob Kapito . That's a big number. Let's put it — and what this means — into perspective.

A $70 trillion dividend spread evenly among the U.S. population would come out to $218,000 per person.

About $10 trillion of those $70 trillion is parked in negative-yield accounts, eroding value ever day.

No doubt, investors are eager to put that money to work. The question is, could the $70 trillion cash pile wake up the stock market?

The stock market is a supply/demand driven market, so $70 trillion worth of demand could certainly jolt stocks higher. Since we are talking about a global market that's significantly larger than $70 trillion, we — again — should put that number into perspective.

$70 trillion put into even more perspective

The chart below is based on U.S. data from the Federal Reserve. It plots the S&P 500 against cash as percentage of U.S. financial assets. 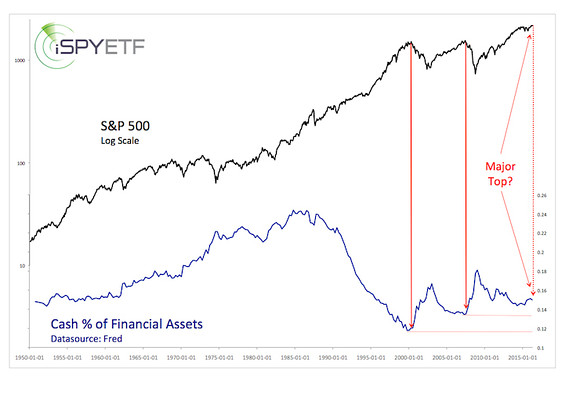 The second chart is based on survey data from the American Association for Individual Investors (AAII). According to AAII, investors kept 18% of their portfolio in cash. We always pay more attention to actual money flow data (Federal Reserve) than surveys (AAII). 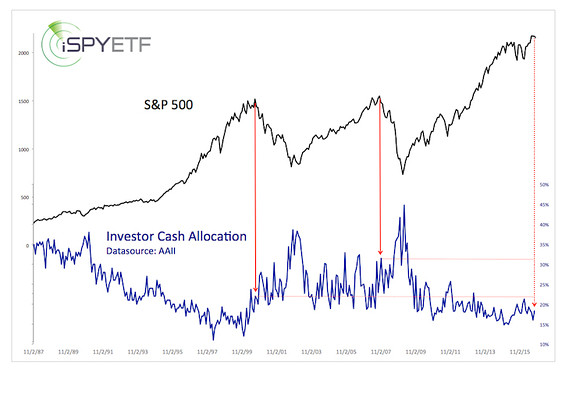 Call it what it is

Money parked in cash vehicles in one of many ways to gauge investor sentiment. Low cash levels are a sign of confidence and extreme confidence (and low cash levels such as in 2000 and 2007) is usually seen near market tops.

It should be noted that the cash allocation (based on the Federal Reserve data) increased since the beginning of 2014.

This harmonizes with the Profit Radar Report's sentiment analysis, which — since 2013 — has been saying that investors are too pessimistic for a major market top ( click here to view an example). Yes, despite rising (although in a very choppy manner) prices, investors have been increasing their cash levels for the last few years (wall of worry?).

In January and February 2016, when the S&P 500 traded near 1,800, the Profit Radar Report noted that: " Sentiment around the May 2015 top was not bullish enough for a major market top " and pointed out bearish sentiment extremes (bullish for stocks) while recommending to buy at S&P 1,828 on Feb. 11.

The money parked in cash should eventually buoy stocks. But before the market moves higher, it may decide to flush out the weak hands. The latest S&P 500 update with the tell-tale signs of a “market flushing” move is available here .