Will China lead emerging markets out of the cellar?

I've been bringing a lot of attention as of late to China, which up until the world was "Putinized" as a Twitter follower of mine calls it, looked to be due for a meltup. Commodities prior to the Ukraine/Russia confrontation had been showing signs of strengthening, and emerging markets overall looked to finally be stabilizing.

Our ATAC models used for managing our mutual fund and separate accounts had exposure to emerging markets more broadly, but rotated back toward the U.S. as relative momentum, once again, failed to stick just before Crimea news was hitting the airwaves.

I believe that the meltup was delayed purely because of concerns over a potential war and political instability. However, a delay is not a reversal in course. Weakness in unjustified movement in emerging markets is now utterly hilarious. Literally everything but emerging markets are up this year, including frontier markets . If you think it makes sense for illiquid frontier markets, the micro-caps of the world, to be so strongly outperforming emerging markets, the small-caps of the world, please join me for a drink and explain to me the logic in that.

"With most people disbelief in a thing is founded on a blind belief in some other thing."

Valuations do not matter apparently. Emerging markets have the honor of now being the only area of the investable landscape that is working for shorts, which in turn is attracting more sellers and causing more bearishness. Clearly this has worked, but the risk is not to those betting long anymore.

Consider the case of China, which over the weekend announced a huge miss on exports, weaker inflation, and a significant trade deficit. What was the reaction by the iShares China ETF /zigman2/quotes/208670743/composite FXI -1.89% ? Down about 1.57%. That despite wildly negative news, and ongoing fears in emerging markets more broadly.

That is resilience given the magnitude of the decline (not huge) relative to the magnitude of poor data (huge). Why was China not down more? Likely because the market now is beginning to realize that the "bad news is good news" mantra may be due to arrive in the world's second-largest economy.

China needs to allow the yuan to weaken after years of appreciation. Indeed this appears to now be what the powers that be want. China's central bank Monday actively pushed its daily reference rate lower to keep downward pressure on the currency. A weaker yuan would make China's exports more competitive, as those goods become cheaper for overseas buyer.

How is that not bullish if that is the direction China is going, when currency devaluation is precisely why Japan /zigman2/quotes/201162210/composite EWJ -0.23%  did so well in 2013?

Take a look below at the WisdomTree Dreyfus Chinese Yuan Fund /zigman2/quotes/203125516/composite CYB -0.36% . Looks like a significant break to me, and one that can continue in the intermediate term. For a larger chart, please click here . 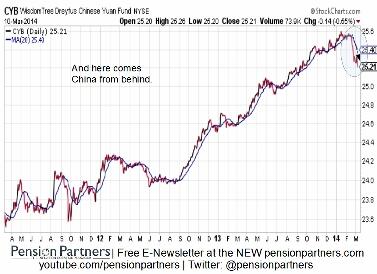 This may be the catalyst emerging-market investors need. India has already begun its meltup. If China now turns around and pulls with it Brazil /zigman2/quotes/208893627/composite EWZ -0.17% , it will be hard for those shorting emerging markets to remain in the trade. The negativity is absolutely stunning. No one can provide any rational justification other than "it's going down." That means the only way this ends is with an extreme move higher to shock people out of their bearish perspective.

In the next few weeks, we may yet again take a bite at the emerging-market apple when our models pick up on relative momentum. A broken clock may be right twice a day, but always remember that gains in the market are not driven by frequency of profit. They are ultimately driven by magnitude.

Get news alerts on iShares China Large-Cap ETF and WisdomTree Chinese Yuan Strategy Fund — or create your own.
Page 1