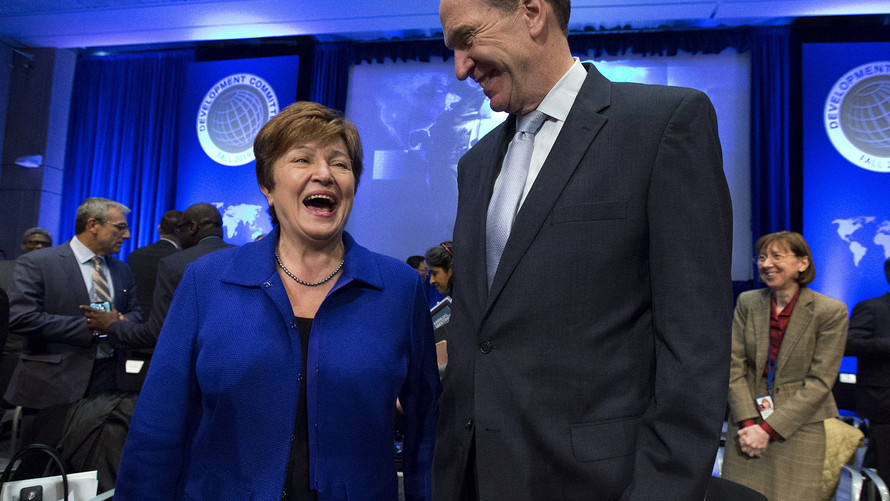 Global finance ministers and central bank officials wrapped up their fall meetings on Saturday with a pledge to “employ all appropriate tools” to combat the weakest global economic growth in a decade, but there was little evidence of progress in easing tensions over international trade policy, a major source of the slowdown.

The policy-setting committee for the 189-nation International Monetary Fund said in a closing statement that economic growth should accelerate next year. Officials acknowledged that a range of factors could undermine that forecast, including continued disputes over international trade policy and increased geopolitical risks.

“We recognize the need to resolve trade tensions and support the necessary reform of the World Trade Organization,” the statement said. It did not detail ways to accomplish that.

There was also no sign that discussions on the sidelines of the meetings had produced any breakthrough in the trade disputes initiated by President Donald Trump as part of his get-tough approach to stronger enforcement of U.S. trade laws to lower America’s huge trade deficits.

U.S. Treasury Secretary Steven Mnuchin, in remarks to the IMF committee, said the administration’s goal was to prepare “a foundation for future growth through fairer trade deals.”

Mnuchin said negotiations last week between the United States and China, the world’s two biggest economies, had achieved “substantial progress” on phase one of a trade deal to resolve the U.S. claims that China is stealing intellectual property.

While Trump suspended a tariff increase on $250 billion of Chinese products that had been scheduled to take effect this past week, few specifics about that agreement have been published. U.S. officials said negotiations to wrap up those details are underway.

The IMF managing director, Kristalina Georgieva, said the threat from trade wars was a chief point of discussion for finance officials.

She said the IMF has estimated that the tariffs already imposed or threatened could shave 0.8% off global economic growth by the end of next year. Much of that stems from the fallout on business confidence.

In trade wars, “everybody loses,” she said. “Policymakers ought to take very seriously their obligations to international cooperation in trade.”

The World Bank’s president, David Malpass, said this week’s finance discussions had focused on how to address multiple challenges.

“Growth is slowing, investment is sluggish, manufacturing activity is soft and trade is weakening,” he said. “Climate change and fragility are making poor countries more vulnerable.”

He said the World Bank was committed to helping to address these challenges to provide a better life for the 700 million people in the world living in extreme poverty.

The IMF, in an updated economic outlook, projected the global economy would expand by 3% this year, the weakest in a decade, and said 90 percent of the world was experiencing a downshift in growth. But the IMF forecast growth will accelerate slightly to 3.4% in 2020, still below the 3.6% rate in 2018.

Jubilee USA, a religious organization fighting global poverty, said in a statement that while the IMF outlined a number of serious threats, the recommendations for dealing with them fell short.

While Trump’s trade policies were a prime topic of discussion at the meetings, finance officials for the most part avoided direct criticism of the American president.

Christine Lagarde, who dealt with the Trump administration during her last three years as head of the IMF, was a bit more direct in an interview to be broadcast Sunday on CBS’s “60 Minutes.”

Asked about Trump’s trade war with China, she said it would give the world’s economy “a big haircut” and should be resolved by having all parties “sit down like big men, many men in those rooms and put everything on the table, and try to deal bit by bit, piece by piece, so that we have certainty.”

“Market stability should not be the subject of a tweet here or a tweet there. It requires consideration, thinking, quiet and measured and rational decisions,” she said.

Lagarde is scheduled to take over on Nov. 1 as the head of the European Central Bank, which manages monetary policy for the 19 countries who use the euro currency.