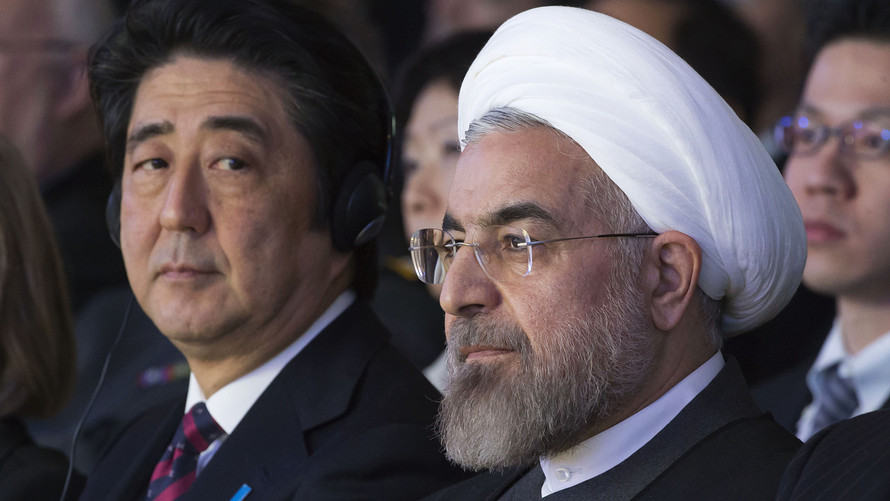 Associated Press
Japanese Prime Minister Shinzo Abe, left, and Iranian President Hassan Rouhani, are shown in 2014. Abe’s trip to Tehran this week represents the highest-level effort yet to de-escalate tensions between the U.S. and Iran.

Yemen’s Iran-allied rebels said they launched a cruise missile Wednesday at a Saudi airport, an attack the kingdom said hit the arrivals hall and wounded 26 people, just hours before Japan’s prime minister was expected in Iran for a historic visit aimed at defusing tensions in the Persian Gulf.

Though there were no fatalities, it was the largest number of civilians to be injured in Saudi Arabia as a result of an attack by the rebels, known as Houthis, since the start of the Saudi-led war in Yemen more than four years ago.

The rebels’ Al-Masirah satellite news channel said the missile hit its intended target, halting air traffic at the airport in the town of Abha in the kingdom’s southwest, some 165 kilometers (100 miles) from the Saudi-Yemen border. The war in Yemen, the Arab world’s poorest country, has killed tens of thousands of civilians, with most of the deaths blamed on Saudi-led coalition airstrikes, and has pushed Yemen to the brink of famine.

Saudi coalition spokesman Turki al-Maliki was quoted on the state-run Al-Ekhabirya news channel as saying three women and two children were among those hurt and that eight people were hospitalized while 18 sustained minor injuries. He did not disclose the nationalities of the injured in the attack, which he said struck the airport’s arrivals hall between 2 a.m. and 3 a.m.

The Saudi military was working to determine what kind of projectile was used by the Houthis, al-Maliki said. Describing it as a terrorist attack, he said it proves the rebels have acquired new types of weapons as a result of Iran’s continued support. Iran denies arming the Houthis.

The Houthis have previously used ballistic missiles to target the Saudi capital, Riyadh, and the airport there. More recently, they have launched bomb-laded drones targeting a key oil pipeline and the southwest city of Khamis Mushait.

A Houthi spokesman, Mohammed Abdel-Salam, said Wednesday’s attack was in response to Saudi Arabia’s “continued aggression and blockade on Yemen.” Earlier in the week, he’d said Houthi attacks on Saudi airports were “the best way to break the blockade” of the airport in Yemen’s capital, Sanaa, which was overrun by the Houthis in late 2014.

Another Houthi spokesman, Brig. Gen. Yahia Sarie was quoted as saying that the missile hit and destroyed the airport’s traffic control tower. He said U.S.-made air defense systems were unable to intercept the missile.

The conflicting claims over which parts of the airport were struck could not immediately be reconciled.

The regional tensions have propelled Japan’s prime minister Shinzo Abe to visit Tehran, the highest-level effort yet to de-escalate the crisis between the U.S. and Iran. It’s also the first visit of a sitting Japanese premier in the 40 years since the Islamic Revolution.

Tehran appears poised to break the 2015 nuclear deal it struck with world powers, an accord that the Trump administration pulled out of last year.

As Abe was on the way to Tehran, hard-line Iranian newspaper Farheekhtegan published a front page image Wednesday of a mushroom cloud from a nuclear blast — a reference to America’s bombing of Hiroshima and Nagasaki at the end of World War II.

“How Can You Trust A War Criminal, Mr. Abe?” the newspaper asked in dual English and Farsi headlines. Hard-line news outlets in Iran immediately picked up the front page from the paper, published by students of Islamic Azad University, which has campuses across the nation.

Iran is threatening to resume enriching uranium closer to weapons-grade level on July 7 if European allies fail to offer new terms for the nuclear deal. While President Donald Trump says he wants to talk to Tehran, the U.S. has piled on sanctions that have seen Iran’s currency, the rial, plummet, along with Iran’s crucial oil exports.

The U.S. also has sent an aircraft carrier and B-52 bombers to the region, along with hundreds more troops to back up the tens of thousands already deployed across the Middle East. The U.S. blames Iran for a mysterious attack on oil tankers off the coast of the United Arab Emirates, while Iranian-backed rebels in Yemen continue to launch coordinated drone attacks on Saudi Arabia.

Abe, who is expected in Tehran on Wednesday afternoon, is acting as an interlocutor for Trump, who recently visited Tokyo. The Japanese premier will hold talks with Iran’s Supreme Leader Ayatollah Ali Khamenei and President Hassan Rouhani during his visit.

Before boarding his airplane at Tokyo’s Haneda Airport, Abe acknowledged the challenges ahead.

“There are concerns over rising tension in the Middle East region,” he said. “Japan wants to do as much as possible towards peace and stability in the region.”

Japan had once purchased Iranian oil, but it has now stopped doing so over American sanctions.

However, Mideast oil remains crucial to Japan and recent threats from Iran to close off the Strait of Hormuz, the narrow mouth through which a third of all oil traded by sea passes, has raised concerns.

Iran’s nuclear deal, agreed to at the time by China, Russia, France, Germany, the United Kingdom and the U.S., saw Tehran agree to limit its enrichment of uranium exchange for the lifting of crippling sanctions. Western powers feared Iran’s atomic program could allow it to build nuclear weapons, although Iran long has insisted its program was for peaceful purposes.

In withdrawing from the deal last year, Trump pointed to the accord not limiting Iran’s ballistic missile program and not addressing what American officials describe as Tehran’s malign influence across the wider Mideast. Those who struck the deal at the time described it as a building block toward further negotiations with Iran, whose Islamic government has had a tense relationship with America since the 1979 takeover of the U.S. Embassy in Tehran and subsequent hostage crisis.

Already, Iran says it quadrupled its production of low-enriched uranium. Meanwhile, U.S. sanctions have cut off opportunities for Iran to trade its excess uranium and heavy water abroad, putting Tehran on course to violate terms of the nuclear deal regardless.