Most Americans are women, except in these states 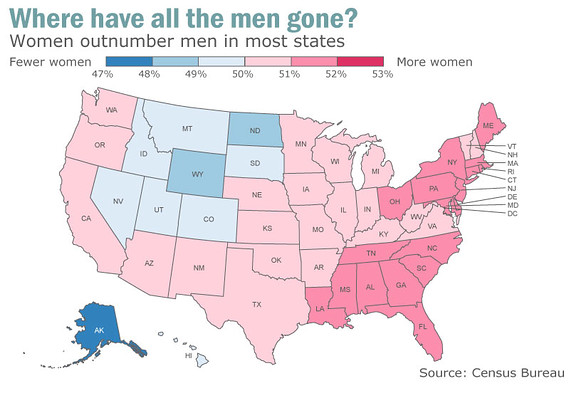 If you’re into playing the odds and want to find love, some states may be better for you to live in than others.

On the flip side, there is a higher percentage of women in Washington, D.C. (ladies make up 52.63% of the population there) than any other state, followed by Delaware (51.62%), Rhode Island (51.55%), Massachusetts (51.52%) and Maryland (51.51%). In other words, fellas, you may have better odds in the Northeast — and worse odds in the West and Midwest — if you’re looking for a female mate; and vice versa for ladies seeking men.

While these spreads may not look that significant, consider what they mean in actual numbers. In Massachusetts, for example, there are more than 200,000 more women than men and in Maryland there are nearly 180,000 more women.

Also read: The only 7 states getting younger

If you’re looking for a younger — or an older — mate, certain states may be better than others as well. Florida, not surprisingly, has the highest percentage of older residents (18.7% are 65 and older), followed by Maine (17.7%) — and both do have a higher percentage of women than men. Meanwhile, Alaska and Utah have the youngest residents with just 9% and 9.8% of their populations, respectively, over 65 — good news for ladies looking for a young mate as both states have more men than women in them.

If you’re curious about how your state or city ranks in terms of age, sex or race, you can check out the new Census Bureau data here .

How to help your family without blowing your savings