5 (more) cheap stocks in the No. 1 energy sector

Analysis: They’ve returned as much as 15% in less than two months 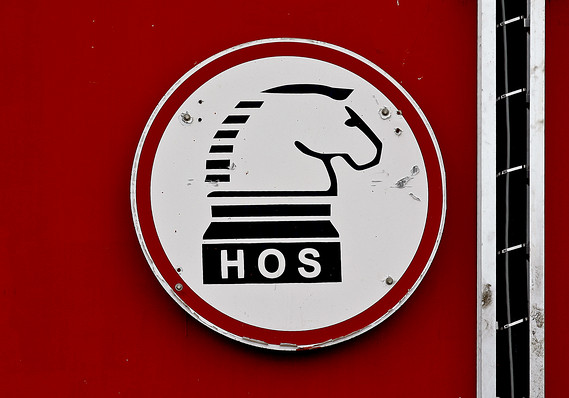 The stock market has wildly underperformed its return last year. But the energy sector has accelerated ahead.

To help investors, we have identified five more oil and gas stocks that trade cheaply relative to 2015 earnings estimates for investors who are keen to juice their portfolios.

Taking a broader view, the S&P Composite 1500 Index is up 5%, and the three strongest subsectors have been Oil & Gas Storage and Transportation, with a 24% advance; Oil & Gas Exploration and Production, up 20%; and Oil & Gas Equipment and Services, which has risen 19%. Those are the best performances among the subsectors.

The expansion of U.S. oil and natural gas production is helping energy companies boost revenue and earnings, which prompts sell-side analysts to raise their estimates, supporting rising stock prices. And there’s plenty of international uncertainty generating higher energy prices, which tends to boost profits. Events putting upward pressure on fuel prices include a possible disruption to the flow of natural gas needed by western European countries, since so much gas flows from Russia through Ukraine, as well as the civil war in Iraq, which now involves Iran and Syria.

As a result, the spot price for natural gas at the New York Mercantile Exchange jumped 7% to $4.54 per million British thermal units on Tuesday, with the price of Brent crude oil up 3% to $114.65 a barrel.

Anyway, following the market close April 29, we identified a select list of the five cheapest oil and gas stocks. Those traded the lowest to consensus 2015 earnings estimates among oil and gas producers, integrated oil companies, gas distributors, as well as pipeline operators, oil services and equipment providers, and contract drillers. The list was a conservative one, limited to companies that had produced profits over the previous five years.

All five stocks on the list have performed well since that article was published: 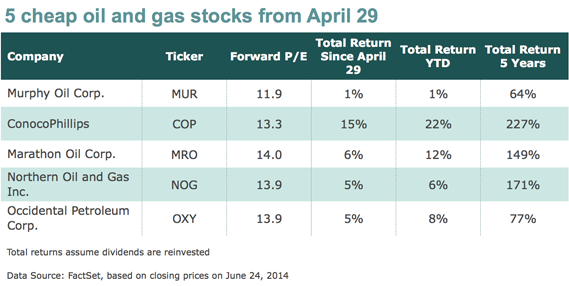 To identify more opportunities for investors, we have put together a new list of the five stocks among the components of the S&P 1500 Oil & Gas Storage and Transportation, Oil & Gas Exploration and Production, and Oil & Gas Equipment and Services subsectors trading lowest to consensus 2015 earnings estimates among analysts polled by FactSet: 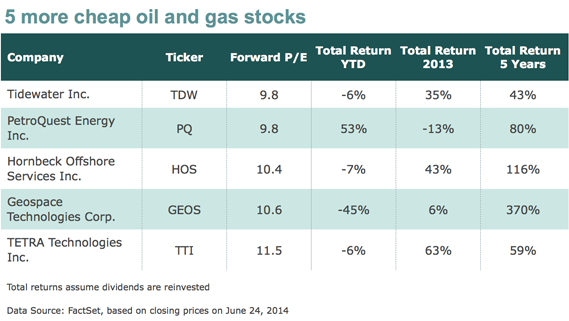 This time we have taken a more aggressive approach, with no effort to pare the list with any conservative criteria. Still, the companies are expected by analysts to post profits in 2015.

As you can see from the total returns this year and last, there’s plenty of volatility. And two companies have been heavily shorted by investors. Here’s more on all five stocks:

The cheapest stock on the new list is Tidewater Inc. /zigman2/quotes/206335478/composite TDW +0.67%  of New Orleans, which closed at $55.35 Tuesday and trades for 9.8 times the consensus 2015 earnings estimate of $5.67 a share. To put that forward price-to-earnings ratio in perspective, the S&P 1500 Composite Energy Index trades for 14.5 times the aggregate 2015 EPS estimate, according to FactSet. The company is the only one on this new list that pays a dividend, with a yield of 1.81%.

Tidewater runs a fleet of vessels supporting the offshore oil drilling industry around the world.

For its fiscal fourth quarter ended March 31, the company reported a 12% increase in revenue to $367 million. Rising interest payments and foreign exchange losses pushed fiscal fourth-quarter earnings down to $43.4 million, or 88 cents a share, from $46.6 million, or 95 cents.

Tidewater CEO Jeff Platt, during the company’s earnings call May 21, said the company remained “generally bullish” in its outlook for “the offshore support vessel industry.”

“As a result, we generally disagree with the overly negative sentiment that a number of analysts and investors that follow the offshore sector have expressed in recent months,” he added.

The company on May 16 said it hadn’t yet repurchased any shares under its existing $200 million buyback program, but it also announced another $200 million program to repurchase shares in the open market until June 30, 2015.