5 things March Madness can teach you about your trading 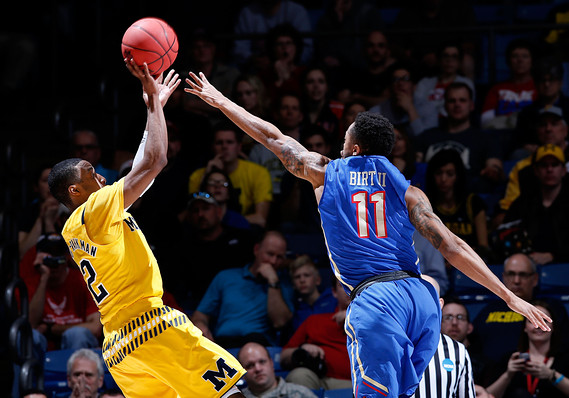 With March Madness upon us, we're provided with an opportune time to reflect on our trading strategy. In fact, one can learn a few money-management lessons when taking a peek at the history of the NCAA men's basketball tournament.

The odds of filling out a perfect March Madness bracket are 1-in-9,223,372,036,854,775,808 (that's quintillion, if you were wondering). Additionally, only one time in history have all four no. 1 seeds made it to the Final Four in the same season, and this occurred in 2008 with Kansas, North Carolina, UCLA and Memphis.

Similarly speaking, there is no such thing as a perfect investment strategy. You will never, ever pick all the winning investments all the time.

No sixteenth-ranked team has ever won a single game in the history of the tournament ... ever . Furthermore, fifteenth-seeded teams have only made it to the second round seven times ... ever .

So regardless of the fact that it might be fun and exciting to pick low-ranked teams in hope of snagging that high-payout "Cinderella" investment, it's probably best to steer clear of asset classes, sectors and sub-sectors that are largely exhibiting weakness relative to the market and/or their peers.

For example, while the indicators might be pivoting as this column is written, it's still too early to tell if now is the time to buy commodities. As such, it is still premature to invest any substantial amount of your safe, serious retirement dollars into oil, natural gas or gasoline. Don't try to be a hero and speculate on investments exhibiting relative weakness. Catching a falling knife usually results in a gash.

In 1985, Villanova was an eight seed and is still the lowest-ranked team to ever win the tournament. The very next year, LSU became the first eleventh-ranked team to make the Final Four. This record was then tied by George Mason in 2006 and again by VCU in 2011. The lesson here is "sometimes you get lucky."

The odds of a no. 11 seed getting to the semifinals is similar to expecting international stocks to finish 2016 as the top-performing asset class. Currently, the strength and momentum just isn't there, so pushing your chips toward overseas stocks will likely end with an early tournament loss in your portfolio.

When it comes to your portfolio, it's foolish to assume that, because a team has done well in the past, that it will not do well in the future. However, just a few years ago, Kentucky didn't even make the cut to enter the tournament. While U.S. stocks generally perform well most of the time, there are some years when they don't deserve a spot in your "bracket." So far, 2016 appears to be one of those years to consider fixed income or even money market equivalents as opposed to domestic equities.

The first March Madness tournament (in 1939), the NCAA actually lost money to the tune of $2,500 — or $35,000 in today's dollars. This could also be a year when your portfolio could lose money, especially if you're exposed to U.S. or international stocks. While analyzing and re-evaluating your portfolio during the tournament this next few weeks, notice the fact that stocks have been weakening, printing lower-lows and lower-highs since almost a year ago. Think of these lower-lows as "losses," so to speak. A loss here and there is no big deal, but a consistent pattern of increased frequency of these lower-lows is analogous to a trend change.

No one wants to pick losing teams in their bracket, especially when those teams are initially perceived as consistent winners. Just be aware of the chance that this year could be different — just like that year Kentucky didn't make the tournament — and that stocks seem less like Final Four contenders and more like the potential big upset of 2016.