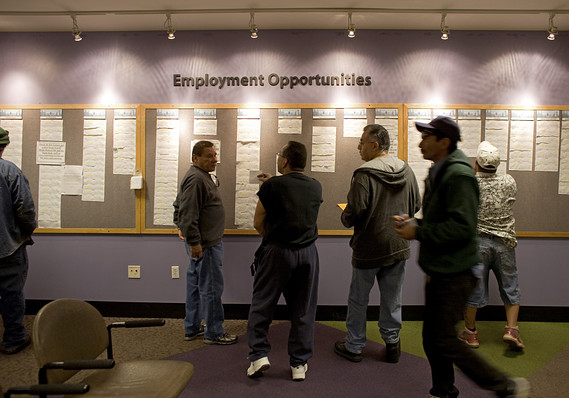 Enlarge Image
People scour the job board looking for employment in Denver.

The numbers: The U.S. created a seasonally adjusted 102,000 private-sector jobs in June, payrolls processor ADP said Wednesday, up from a revised 41,000 in May.

The gain was well below the average of average 211,000 jobs created in the three months ending in April.

Before the ADP report, economists polled by MarketWatch expected the Labor Department to report a 170,000 gain in nonfarm jobs on Friday. The nonfarm jobs also includes government workers.

Mark Zandi, chief economist at Moody’s Analytics, said the data show the job market continues to “throttle back.” Businesses are more cautious, in part due to uncertainty over trade.

Zandi said the he thought unemployment was already starting to trade higher. He thought the unemployment rate would rise from May’s 3.6% rate. “The economy’s growth rate is significantly slowing and I think the risks are rising it is going to stall out,” Zandi said on CNBC.

What are they saying?

“The bigger picture here is that payroll growth had to slow this year because the economy is no longer being boosted by last year’s tax cuts. But the key private sector survey measures of hiring, notably the ISM surveys and the NFIB survey, have substantially recovered,” Ian Shepherdson, chief economist at Pantheon Macroeconomics.

Stocks were higher on investor optimism that the Federal Reserve will cut interest rates at the end of the month. The S&P 500 /zigman2/quotes/210599714/realtime SPX -2.14%  was up 19 points to 2,992 and headed for its third consecutive record close.