About half of Americans now believe police violence against the public is a serious problem, up from a third, according to a poll 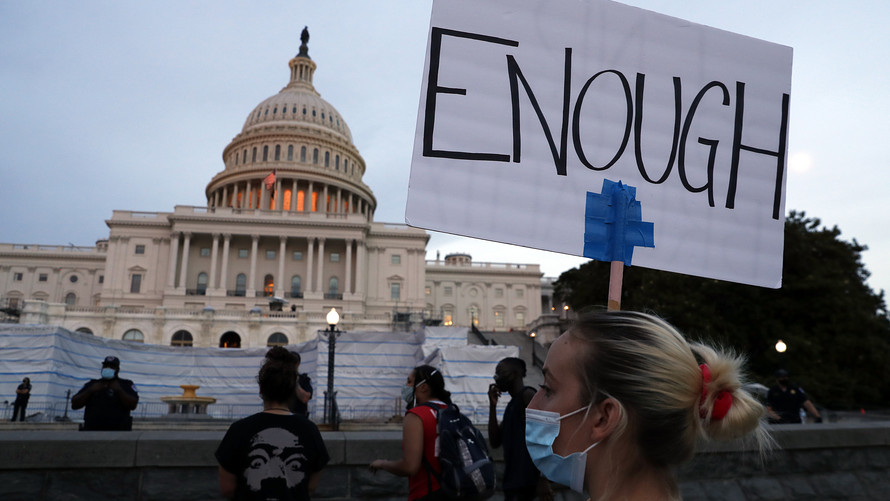 AP
Demonstrators protest the death of George Floyd, Wednesday, June 3, 2020, at the U.S. Capitol in Washington.

It’s rare for public opinion on social issues to change sharply and swiftly. And yet in the wake of George Floyd’s death, Americans’ opinions about police brutality and racial injustice have moved dramatically.

About half of American adults believe police violence against the public is a “very” or “extremely” serious problem, according to a poll conducted earlier this month by The Associated Press-NORC Center for Public Affairs Research. Only about a third said the same as recently as last September, as well as in July 2015, just a few months after Freddie Gray, a Black man, died in police custody in Baltimore.

Floyd, a Black man, died on May 25 after a white Minneapolis police officer pressed his knee into Floyd’s neck for nearly eight minutes. In the weeks that followed, protests erupted nationwide.

The recent shifts in public opinion stand out when compared with years of survey research conducted following similar slayings of Black people by police. They are distinct from slow and steady movement on other social issues, such as support for same-sex marriage. And there is evidence they may last.

“I think this seems to be something different from the gradual change that we often see with cultural and social issues,” said Jennifer Benz, the deputy director of the AP-NORC Center.

The new poll and recent trends from NORC’s General Social Survey, she said, are “suggestive that there’s been something brewing for the past couple of years that could well be leading to lasting change, as opposed to situational change.”

MORE ON THIS MOMENT

More Americans than in 2015 say police in most communities are more likely to use deadly force against a Black person than a white person, 61% today compared with 49% in 2015. Only about a third of Americans say the race of a person does not make a difference in the use of deadly force, compared with roughly half in 2015.

And 65% say that police officers who cause injury or death in the course of their job are treated too leniently by the justice system, compared with 41% in 2015. Fewer now think police are treated either fairly or too harshly.

The recent poll builds on marked changes in public attitudes toward race relations observed in the 2018 General Social Survey, a long-running poll of Americans that started in 1972. The percentage saying the country spends too little on improving conditions of Black Americans peaked at 52%, up dramatically from 30% in 2014. Republicans and Democrats alike were more likely to say that. The poll also found more Americans attributing racial disparities in income, jobs, housing and education to discrimination.

Opinion on social issues often change gradually over an extended period of time.

Just 11% of Americans said gay and lesbian people should have the right to marry in 1988, according to the General Social Survey. That grew to 31% by 16 years later, the next time the question was asked. But after that, support for gay marriage didn’t rise by more than 10 percentage points from one survey to the next. Support instead grew steadily over two decades to become the majority opinion, most recently at 68% in 2018.

The trend is similar in support for marijuana legalization. In 1973, the General Social Survey found that just 19% of Americans said marijuana should be made legal. Support ticked up and down for most of the following three decades, never exceeding 30%. It reached 31% in 2000 and steadily rose to 44% in 2010 and 61% in 2018. Like for same-sex marriage, the share saying marijuana should be legal never rose more than 10 percentage points from one poll to the next.