America’s most successful companies are killing the economy

Winner-take-all companies, including Alphabet and Wal-Mart, are driving down wages and destroying communities

Wages are lower; profits are higher

The most damning charge is that the trend toward larger companies is driving a wedge between the few at the top who are paid spectacularly well and the majority at the bottom whose wages are stagnant.

Economists David Autor, David Dorn, Lawrence Katz, Christina Patterson and John Van Reenen concluded in a recent paper that the rise of “superstar” firms with high profits and relatively small workforces has contributed to the shrinkage in workers’ share of national income and a corresponding increase in the share of profits.

Economists Jason Furman and Alan Krueger argue that some firms are able to tamp down wages through what’s called monopsonistic behavior , such as collusion and noncompete agreements. (A monopsony is a company that exercises power as the only buyer, analogous to a monopolist who is the only seller.) Collusion to depress wages is prevalent in high-tech, entertainment and health care. 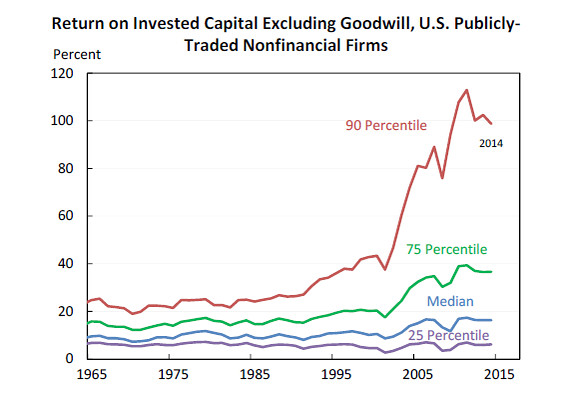 Jason Furman & Peter Orszag
The median corporation gets a return on invested capital of about 20%, but the top 10% of companies hit 100%, a sign that they are extracting economic rents due to their market power.

Furman and Peter Orszag, meanwhile, found that a small number of companies use their market power to capture extraordinary 100% returns on invested capital, compared with typical profits of 20% or so.

Also read: Monopsony — the one word that explains why your pay is so low

Local economies are hollowed out

Once upon a time, back in the economy’s golden age, every city had a local department store or two, as well as other businesses with deep roots in the community, such as banks, newspapers, TV stations, factories, drug stores, utilities and others.

The owners and the top managers of those businesses lived in the community, and felt a sense of civic pride that went beyond noblesse oblige. They were the paternalistic philanthropists who funded the arts, the parks, the libraries, the schools and the hospitals.

The money generated by those businesses stayed local, keeping the regional economy chugging along.

But now the owners and top managers have moved on, replaced by the faceless, faraway investors that George Packer described in “The Unwinding.” The new bosses have no place for sentimentality, as Christopher Lasch observed in his prophetic “The Revolt of the Elites and the Betrayal of Democracy” more than 20 years ago. They care about their bottom line, their summer house and their private school; they don’t care about Youngstown.

Locally owned businesses are better for communities, many researchers have found. They hire more local workers, they buy from local suppliers, and the revenue they receive is recycled locally, rather than in the Hamptons or Shanghai. The presence of lots of local businesses even seems to lower the crime rate.

Local businesses appear to be a public good, something state and local economic development agencies should consider the next time they try to lure a big multinational corporation.

The potential profits and wealth earned by a winner-take-all company ought to provide a great incentive for entrepreneurs to start new businesses with the hope of becoming a dominant firm themselves, but the trend is going the wrong way: For all the talk about disruptive companies, there are fewer startups now than there were decades ago, in part because the barriers to entry into these lucrative markets are so high that few entrepreneurs even try. 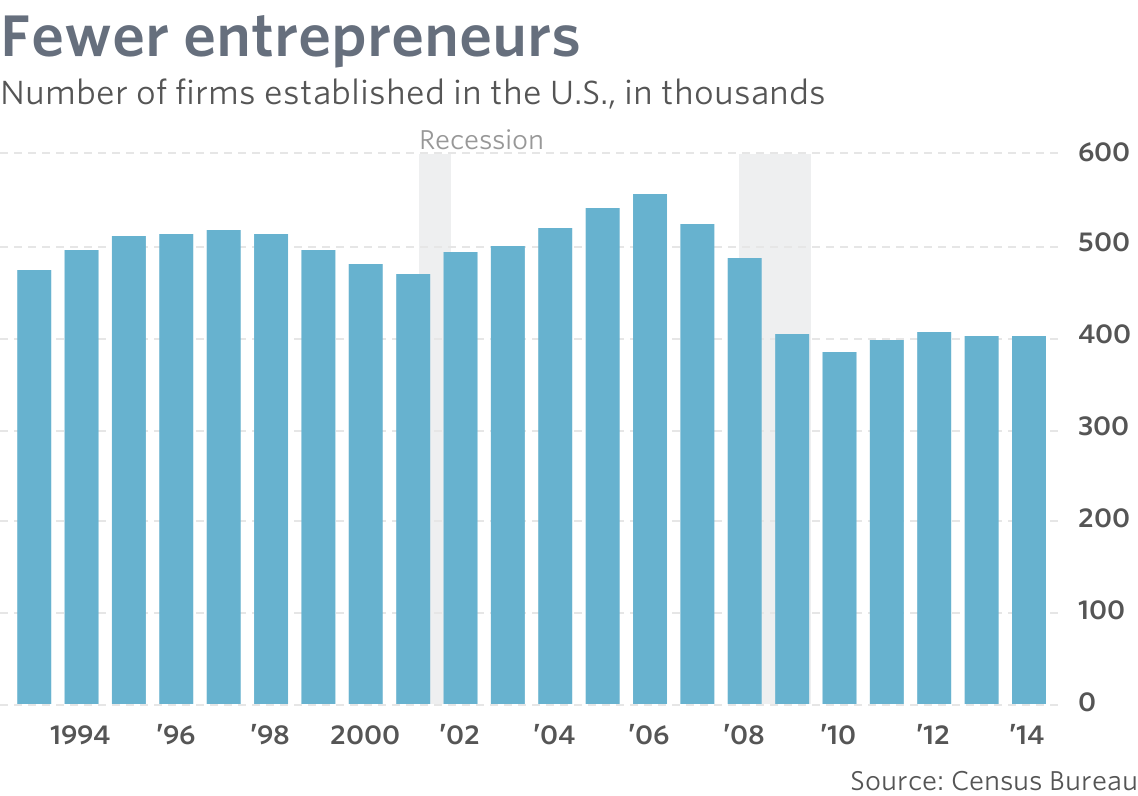 Source: Census Bureau
The number of new companies formed each year is down sharply.

Many of the new tech startups never get the chance to compete with the established companies, because as soon as they prove their technology, they are acquired. The big five tech firms — Alphabet, Amazon, Apple, Facebook and Microsoft — have acquired more than 500 companies in the past decade.

The most profitable companies in America aren’t reinvesting much in their businesses. For them, it’s more profitable to restrict production and dampen supply than it is to invest in expanding their capacity. If would-be rivals can’t mount an effective attack on their moat, the entrenched companies have a reduced incentive to research and develop the next big thing. Innovation suffers, and that means the economy isn’t growing as fast as it could.

The economy is indeed rigged against the majority in favor of a few. It’s not just a few banks that are “too big to fail.” It’s not just a few heavily regulated industries, or the new frontiers of high-tech. Most of the highly successful businesses are privileged.

Many critics of our stagnant economy say the problem is globalization, and their answer is to control the borders. But the problems of business concentration would be just as debilitating if the United States were a completely closed economy. The global nature of these businesses isn’t the core problem; concentration is.

The winner-take-all economy is making losers out of American workers and communities. We desperately need more competition. Our economy needs to be constantly renewed through the process of creative destruction, but that’s not happening.

Now read: Amazon is going to kill more American jobs than China did