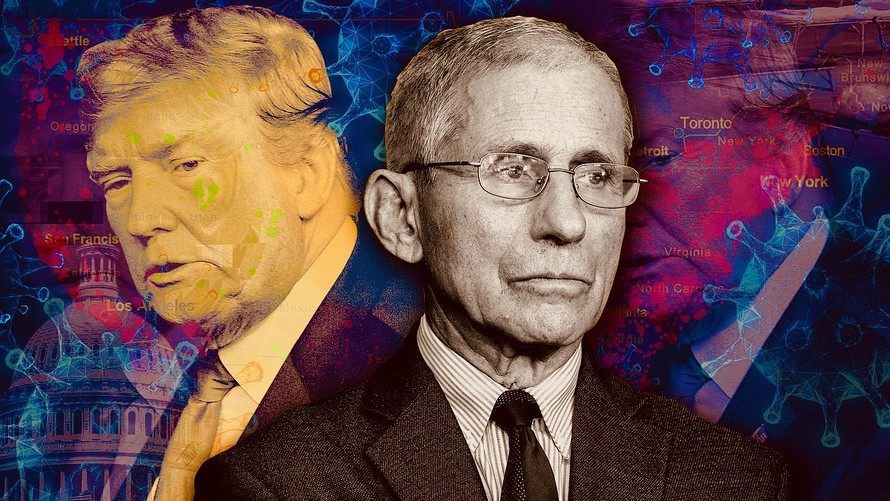 Getty Images
President Donald Trump and Anthony Fauci, director of the National Institute of Allergy and Infectious Diseases, are rapidly diverging with their respective messages on coronavirus. Fauci said he has not briefed the president since June 2.

With a resurgence of coronavirus cases in the U.S. and states pausing their reopening plans, the Trump administration is pointing a finger at Anthony Fauci, the director of the National Institute of Allergy and Infectious Diseases for three decades and one of the leading experts on pandemics in the U.S. for four decades.

The same day, President Trump retweeted a tweet from April that was critical of Fauci: “So based on Dr. Fauci and the Democrats, I will need an ID card to go shopping but not to vote?”

He also retweeted this tweet : “The most outrageous lies are the ones about Covid 19. Everyone is lying. The CDC, Media, Democrats, our Doctors, not all but most that we are told to trust. I think it’s all about the election and keeping the economy from coming back, which is about the election. I’m sick of it.”

Fauci told the Financial Times that he has not briefed the president since June 2. Most voters said they approved of Fauci, although the majority of Republicans said so by a whisker, according to a New York Times/Siena College poll of 1,337 registered voters from June 17 to June 22. Overall, 67% of voters said they approved of the doctor, including 81% of Democrat, 51% of Republicans and 67% of Independents.

Last week, Trump also doubled down on his criticism of Fauci’s response to the pandemic. “Dr. Fauci's a nice man, but he’s made a lot of mistakes,” he said on Sean Hannity’s Fox News show. “Like you don’t have to ban them coming in from very infected China. I did it anyway and we saved hundreds of thousands of lives. I banned Europe from coming in when Italy and France and Spain were having all the problems.”

The president has rarely worn a mask in public and has not said Americans should wear masks. In a break with his tradition of eschewing any face covering, he wore one this past weekend while visiting Walter Reed National Military Medical Center.

Trump himself has previously been circumspect on masks. On April 3, the administration and the Centers for Disease Control and Prevention reversed their policies on masks, and said everyone — not just medical workers, as they previously said — should wear face coverings. Trump cited “recent studies” of asymptomatic transmission for the U-turn, while the CDC cited “new evidence.”

On April 15, New York Gov. Andrew Cuomo issued an executive order requiring New Yorkers to wear masks in public. “Put the mask on when you are not in socially distant places,” he said. “It is your right to go out for a walk in the park, go out for a walk because you need to get out of the house. Fine, don’t infect me. You don’t have a right to infect me.”

Fauci recently said that the U.S. government had not been doing well with contact tracing, the process of tracing people who have been in contact with someone identified to have the virus, instructing them to stay home, and connecting them with the resources they need to do so. “I don’t think we’re doing very well, for a number of reasons, and not all of which is the fault of the system,” he said in an interview last month with CNN’s /zigman2/quotes/203165245/composite T +0.31%   Elizabeth Cohen.

COVID-19, the disease caused by the virus SARS-CoV-2, has already proved extremely infectious. It had infected 13.1 million people globally and more than 3.4 million in the U.S. as of Tuesday, according to official figures collated by Johns Hopkins University’s Center for Systems Science and Engineering. The disease had claimed at least 573,664 lives worldwide and 135,615 in the U.S.

The White House’s sharp words for Fauci came as confirmed coronavirus cases were rising in nearly 40 U.S. states. Meanwhile, New York, which was once the epicenter of the pandemic in the U.S. and still has the most cases of anywhere in the U.S. (at least 406,400 confirmed cases and 32,395 fatalities from the disease), reported zero deaths Monday for the first time since the pandemic began.

New Jersey (15,560 deaths) and Massachusetts (8,330 deaths) are among the top three states with the highest number of fatalities.

Florida’s Department of Health reported 15,299 people tested positive for COVID-19 on Sunday, bumping the total confirmed case tally for the Sunshine State to 269,811 cases, the Associated Press reported. The previous record was 11,694 cases in a single day, set last week by California. On Monday, Florida reported over 12,000 new cases.

‘Why is the White House trashing Dr. Fauci?’

In more bad news, Florida counted a record of 514 fatalities last week, compared with the average of 30 deaths a day the state was recording just three weeks ago. Testing has doubled in the past month to almost 50,000 a day from 25,000, and the percentage of people testing positive has risen to an average of 19% in the last week from less than 5% a month ago, the AP reported. To date, 4,277 people have died in Florida from COVID-19.

Studies have concluded that face masks have helped reduce contagion by reducing droplets being sprayed into the air during flu season ; one Japanese-based study says this works when paired with vaccination. It may be that masks work in a small number of cases and/or just wearing them helps to promote healthy behaviors.

<STRONG /> On Monday, CNN reporter Jim Acosta asked White House Press Secretary Kayleigh McEnany: “Why is the White House trashing Dr. Fauci? The president has gone off on anonymous sources in the past. Why not have the guts to trash Dr. Fauci with your own names?” McEnany said suggestions that there was opposition research on Fauci “couldn’t be further from the truth.” She said the White House issued statements made by Fauci in response to a reporter’s enquiry.

Acosta suggested the president made mistakes: “He suggested at one point that Americans inject themselves with disinfectants. That sort of thing. Why not send out these notes to reporters about what Dr. Fauci said in the past with your names on them? It was sent out by a White House official.” In response to Acosta, McEnany said the president has had an “historic response” to the pandemic, and said Fauci himself has praised the president.

(In April, Trump floated the idea of using ultraviolet light inside the human body or a disinfectant by “injection” as a treatment for coronavirus, a suggestion doctors called “dangerous.” The next day, Trump said he was not being serious: “I was asking a question sarcastically to reporters like you just to see what would happen.”)

The rift between Fauci and Trump widened against a backdrop of rising cases. Last week, in an interview livestreamed on Twitter /zigman2/quotes/203180645/composite TWTR -0.63% and Facebook /zigman2/quotes/205064656/composite FB -1.15%  with the head of the National Institutes of Health, Francis Collins, Fauci said that unlike Europe, U.S. communities “never came down to baseline and now are surging back up,” and “we’re still knee-deep in the first wave.”

‘We have for the last three weeks been the worst in the entire country.’

Will Humble, executive director of the Arizona Public Health Association

Arizona reported more than 2,500 new coronavirus cases Sunday and 1,357 deaths on Monday. It now has more than 123,824 confirmed cases of COVID-19 and 2,246í deaths in total. Over the past seven days, nearly 27% of tests there were positive, the highest rate in the nation.

Meanwhile, Mayor Steve Adler of Austin, Texas, previously told CNN: “If we don’t change the trajectory, we are within two weeks of having our hospitals overrun.” Citing comments by Trump that COVID-19 would go away and that 99% of cases were harmless, Adler, a Democrat, said, “It makes me angry. You know, I understand he has a tough job, but it is dangerous not to be sending a clear message to Americans.”

Houston Mayor Sylvester Turner, also a Democrat, echoed those sentiments on CBS /zigman2/quotes/200340870/composite VIAC -1.39% . “A month ago one in 10 people were testing positive. Today, it’s one in four,” he said “The number of people who are getting sick and going to the hospitals has exponentially increased. The number of people in our ICU beds has exponentially increased.” Turner also said hospitals in his city could be in “serious trouble” if they don’t get a handle on the spread.

Texas Gov. Greg Abbott, a Republican, has warned of another lockdown if people don’t wear masks. “It’s disappointing and again, I can understand the mindset being a kid who grew up in Longview myself, that this may not be the top priority. A murderer, or a rapist or a robber is far more serious to concentrate on,” he told local news station CBS19.

“However, I know this also, and that is if we do not all join together and unite in this one cause for a short period of time, of adopting a mask ... it will lead to the necessity of having to close Texas back down,” he added. “The only way those businesses are going to stay open is to make sure people wear masks to slow the spread of the coronavirus.”

Fauci said earlier this month that America needs to balance the needs of the nation’s economic and public health. People need to practice social distancing and wear face masks, he said. “We do need to open up again, no doubt about it, we want to get the economy back,” he said. “But you’ve got to do it in a measured way, and now we’re seeing the consequence of community spread.”

Appearing to pour cold water on reports of a rift between the president and Fauci, McEnany said Monday at the White House press conference, “Dr. Fauci and the president have always had a very good working relationship.”