The president flew across the nation to gather a big crowd of supporters, most of them maskless and all of them flouting public health guidelines that recommend not gathering in large groups 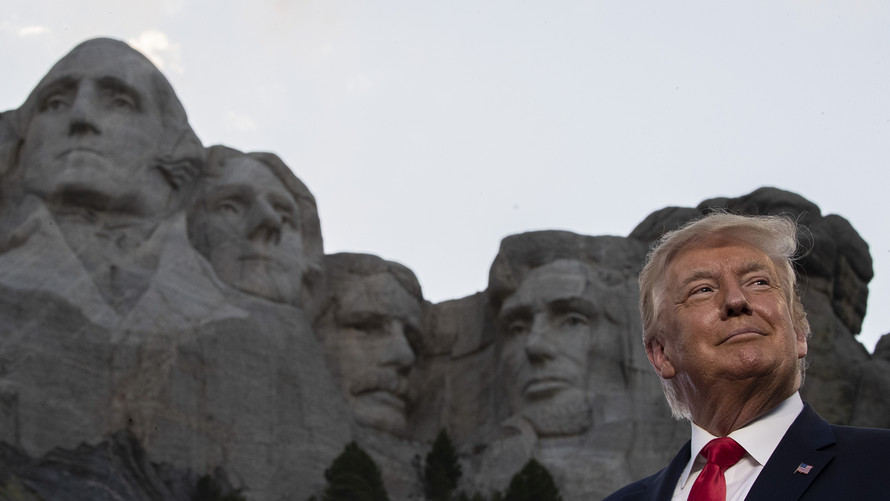 At the foot of Mount Rushmore and on the eve of Independence Day, President Donald Trump dug deeper into America’s divisions by accusing protesters who have pushed for racial justice of engaging in a “merciless campaign to wipe out our history.”

The president, in remarks Friday night at the South Dakota landmark, offered a discordant tone to an electorate battered by a pandemic and seared by the recent high-profile killings of Black people. He zeroed in on the desecration by some demonstrators of monuments and statues across the country that honor those who have benefited from slavery, including some past presidents.

Four months from Election Day, his comments amounted to a direct appeal to the political base, including many disaffected white votes, that carried him to the White House in 2016.

“This movement is openly attacking the legacies of every person on Mount Rushmore,” Trump said. He lamented “cancel culture” and charged that some on the political left hope to “defame our heroes, erase our values and indoctrinate our children.” He said Americans should speak proudly of their heritage and shouldn’t have to apologize for its history.

The speech and fireworks at Mount Rushmore came against the backdrop of a pandemic that has killed over 125,000 Americans. The president flew across the nation to gather a big crowd of supporters, most of them maskless and all of them flouting public health guidelines that recommend not gathering in large groups.

The discord was heightened as the Trump campaign confirmed during the president’s speech that Kimberly Guilfoyle, a top fundraiser for the campaign and the girlfriend of Trump’s eldest son Donald Trump Jr., had tested positive for the coronavirus while in South Dakota. Both Guilfoyle and Trump Jr., who serves as a top surrogate for the president, are isolating themselves and have canceled public events, according to Sergio Gor, chief of staff to the Trump campaign’s finance committee.

During the speech, the president announced he was signing an executive order to establish the National Garden of American Heroes, a vast outdoor park that will feature the statues of the “greatest Americans to ever live.”

Amid the campaign headwinds, the president has sharpened his focus on his most ardent base of supporters as concern grows inside his campaign that his poll numbers in the battleground states that will decide the 2020 election are slipping.

Trump in recent weeks has increasingly lashed out at “left-wing mobs,” used a racist epithet to refer to the coronavirus and visited the nation’s southern border to spotlight progress on his 2016 campaign promise to build a U.S.-Mexico border wall.

The event, while not a campaign rally, had the feel of one as the friendly crowd greeted Trump with chants of “Four more years!” and cheered enthusiastically as he and first lady Melania Trump took the stage.

Republican Gov. Kristi Noem echoed Trump’s attacks against his opponents who “are trying to wipe away the lessons of history.”

“Make no mistake: This is being done deliberately to discredit America’s founding principles by discrediting the individuals who formed them,” she said.

The small town of Keystone, which lies a couple of miles from the monument, was buzzing with people Friday hoping to catch a glimpse of the fireworks and the president. Many wore pro-Trump T-shirts and hats. Few wore masks.