At Wexton victory party, supporters say they didn’t want to leave anything to chance 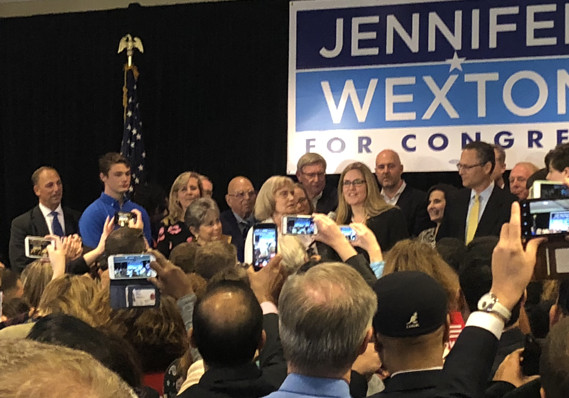 State Sen. Jennifer Wexton became the first Democrat on Tuesday to flip a seat held by Republicans, capturing Virginia’s 10th district that has been in Republican control for over 40 years.

“I’ve been saying since the beginning of the campaign that change would happen, and change came tonight,” Wexton said.

She defeated Rep. Barbara Comstock, the Republican who had faced an uphill challenge in this district near Washington, D.C.

Wexton was the first victory of what would be enough for Democrats to regain control of the House of Representatives.

Among attendees at her election party held in Dulles, Virginia, were families, representatives from Moms Demand Action, a pro-gun control advocacy group, and several first-time canvassers. While the victory did not come as a surprise to Dana Hemlock, a 60-year-old retiree and her college friend Charles Hinckley, also 60, who is an investment adviser.

They both welcomed the change of power. “It feels great,” Hemlock said. “I hope it’s just the beginning of the whole night.”

“I was quite optimistic that she’d win, but after 2016, who knows,” Hinckley said, “but I didn’t want to leave anything to chance so I went out and canvassed.”

Among other first-time canvassers was Jason Elizar, a 40-year-old attorney. Though he would have voted for Wexton regardless of the 2016 election, he said that he would not have canvassed if not for the Trump presidency. “I don’t 100% agree with her on all of her stances, but I love her demeanor,” he said.

Since July he has knocked on over 500 doors of voters in the district.

Beyond Wexton, voters largely feel that this election is the only way to challenge President Trump. “The Republic may fall apart if the Democrats don’t win tonight,” said Mike Meyer, a 60-year-old government researcher. “I have dedicated my entire heart for this campaign,” he added, saying that he knocked on over 1,000 doors.