By Tatsuo Ito and Takashi Nakamichi 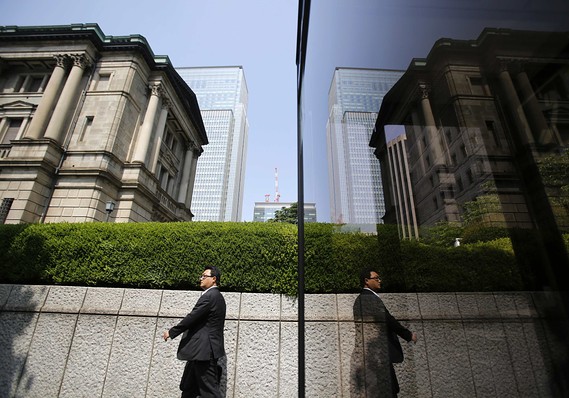 Enlarge Image
The Bank of Japan building in Tokyo.

A continued slide in oil prices is making it even more difficult for the central bank to achieve its 2% inflation target soon, but the absence of extra easing measures indicates the BOJ’s optimism that underlying inflation remains in place and that the economy could grow faster down the line.

In its updated price and growth projections for the next two years, the bank cut its median forecast for the average rise in the consumer-price index in the year starting April to 1.0% from the previous 1.7%.

The sharper-than-expected cut, made for the second time in a row, is still fairly bullish considering the recent drop in the inflation rate to well below 1%. The central bank revised up its price forecast in the following year, a sign of confidence that cheaper energy costs will provide a major boost to firms and households, stimulating their spending and leading to a rise in prices.

The BOJ sharply raised its view on growth adjusted for inflation, expecting gross domestic product to rise 2.1% in fiscal 2015 and 1.6% the following year. But it cut its forecast for the year ending in March to a 0.5% contraction from the previous 0.5% expansion.

Yasuyo Sato contributed to this article.