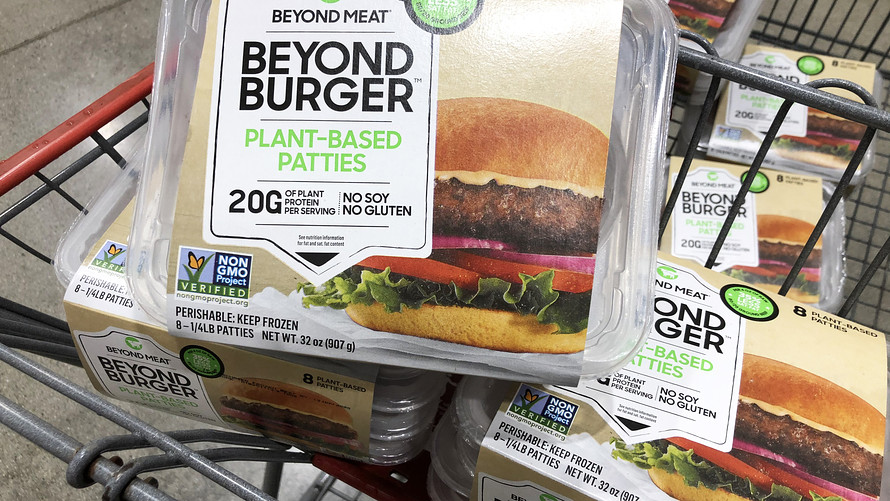 Beyond Meat Inc. is getting a bounce from an insatiable appetite among meat eaters.

The first-quarter results, announced after the market’s close Tuesday, initially sent Beyond Meat (NAS:BYND)  shares up more than 7% in after-hours trading. Beyond Meat stock has roughly quadrupled from its initial public offering price of $25, and shares are up 26.5% in the past 12 months, while the S&P 500 index (S&P:SPX)  has inched down 0.5%.

The results “validate the continued strength of the plant-based food movement,” and “helped mitigate unprecedented COVID-related challenges” to business operations, Beyond Meat Chief Executive Ethan Brown said during a conference call with analysts following the earnings statement . He said uncertainty around the outbreak’s short-term impact has prompted Beyond Meat to withdraw its 2020 financial outlook, but meat constraints provide a long-term opportunity for Beyond Meat to vastly expand its reach among consumers and retailers.

Beyond Meat offers meat alternatives that could find a new spotlight as the coronavirus pandemic damages the traditional-meat supply chain.

Plant closures at Tyson Foods Inc. (NYS:TSN)  , the biggest U.S. meat company; Smithfield Foods Inc., the world’s No. 1 pork producer; and JBS SA, the biggest global meat company, underscore the challenges each face in producing meat while maintaining the safety of employees at plants, which have become hot spots for the spread of COVID-19. The closures have resulted in a 25% reduction of pork production and 10% of beef production in the U.S., according to the United Food and Commercial Workers International Union.

Tyson shares were clobbered Monday after it reported that production disruptions took a toll on profits.

Disruptions in meat production amid escalating demand “without a doubt” will lead to higher prices, a Sysco Corp. (NYS:SYY)  executive said during a conference call with analysts. At the same time, some Wendy’s Co. (NAS:WEN)  restaurants have temporarily taken hamburgers off the menu. A random sampling of Wendy’s menus found 5% to 10% were chicken-only, Stifel analysts said in a note Tuesday.

Wendy’s acknowledged that certain menu items “may be temporarily limited” at some restaurants, though it’s uncertain how many of its roughly 5,800 U.S. eateries have been affected.

Beyond Meat should continue to see a revenue bump in the current quarter after its began selling product through nearly 4,200 Starbucks Inc. (NAS:SBUX)   locations in China on April 21. Additionally, Starbucks on Monday said it would open more than 85% of its company-operated stores in the U.S. by the end of this week, and 90% by early June — albeit with limited hours and no dine-in service.

Brown said the company also intends to leverage marketing tie-ins with professional athletes like the NBA’s Kyrie Irving and Chris Paul, and Olympian Lindsey Vonn to highlight its healthy benefits.