Facebook and Microsoft are mad at Apple, Google and Amazon are being targeted by high-profile tech execs, and everybody wonders why Microsoft is avoiding any scrutiny 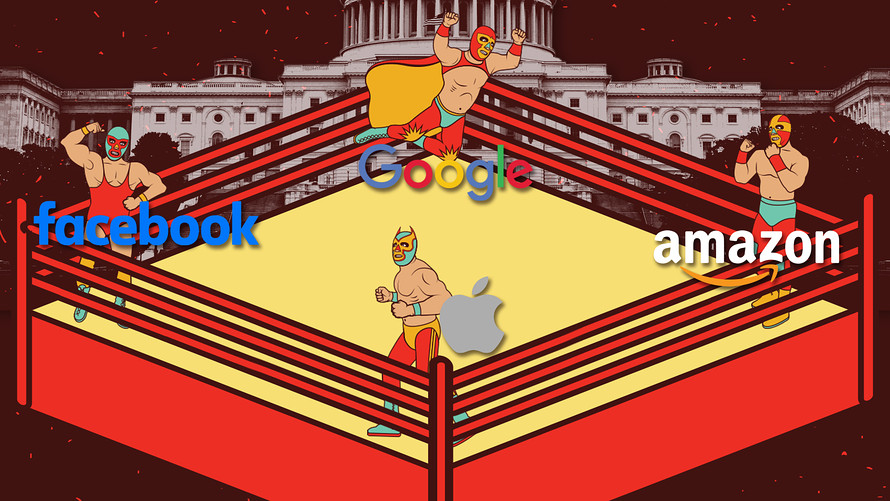 “Battle royale” evokes images of professional wrestlers engaged in a free-for-all brawl in which combatants eventually turn on one another until there is an eventual winner. With apologies to Hulk Hogan and Andre the Giant, Big Tech is taking on the same trappings as companies turn on one another amid multiple antitrust investigations and issues.

As the Justice Department, Federal Trade Commission, Congress and state attorneys general dig deeper into their probes, and as Apple Inc. /zigman2/quotes/202934861/composite AAPL +1.26%  and Epic Games Inc. duke it out in court, some of the companies targeted are taking a page out of the squared circle and turning on one another.

A quick recap: Facebook Inc. /zigman2/quotes/205064656/composite FB +1.64%  is targeting Apple amid its fight with Epic over 30% fees on the App Store. In TV commercials and brand messaging, Apple repeatedly takes swipes at the privacy policies of Facebook in its pursuit of targeted advertising. High-profile names in tech, meanwhile, question business systems at Google and Amazon ahead of charges against those companies that are expected soon. All the while, Big Tech employees and executives increasingly are grumbling about Microsoft Corp. /zigman2/quotes/207732364/composite MSFT +1.37%  seemingly getting a free pass from the Trump administration.

In a closed-door meeting with Facebook employees in late August, Chief Executive Mark Zuckerberg said Apple “charge[d] monopoly rents” which “blocks innovation, blocks competition.” He further upped the ante Tuesday, suggesting in an interview with Axios that the government should investigate the App Store. “I think some of the behavior certainly raises questions,” he said. “And I do think it’s something that deserves scrutiny.”

Not to be excluded, Microsoft claimed Apple’s threat to revoke Epic’s developer account would have far-reaching effects harmful to the videogame industry.

“If Unreal Engine cannot support games for iOS or macOS, Microsoft would be required to choose between abandoning its customers and potential customers on the iOS and macOS platforms or choosing a different game engine when preparing to develop new games,” Kevin Gammill, Microsoft’s general manager for Gaming Developer Experiences, said in a statement. “Apple’s discontinuation of Epic’s ability to develop and support Unreal Engine for iOS or macOS will harm game creators and gamers.”

Complicating matters, Apple on Friday imposed changes to its App Store that could severely hamper game-streaming services from Google Stadia and Microsoft’s xCloud. Among the revisions to iOS 14, the latest version of the iPhone operating system expected later this month, one would require games offered in the service to be downloaded directly from App Store — not from an all-in-one app like Alphabet Inc. /zigman2/quotes/202490156/composite GOOGL +0.80% /zigman2/quotes/205453964/composite GOOG +0.54%  and Microsoft are offering.

In another wrinkle to the Apple-Facebook standoff, Instagram CEO Adam Mosseri on Friday told CNBC that the company strongly objects to a planned change to iOS that would impact how it and other mobile advertisers track users. On Thursday, Apple said it will delay until early next year changes to its privacy policy that Facebook and others claim will eviscerate advertising sales targeting users on iPhones and iPads.

Even those who helped create some of tech’s most important properties are aghast at what they have become. In August, YouTube co-founder Chad Hurley asked via Twitter if “YouTube become the Amazon of video? If so, where is the Shopify of video?”

“What if I told you the obnoxiously high 30% App Store fee was a deal? This is the story of a video site that uses it’s size and power to take nearly double that,” he wrote.

A long list of former Facebook employees and advisers — among them, co-founder Chris Hughes, ex-Chief Security Officer Alex Stamos and venture capitalist Roger McNamee — have commented with distress about the company’s impact on society. Hughes went so far last year as to advocate breaking up the company.

The finger-pointing and name-calling belies long-simmering competition between four companies — Apple, Google parent Alphabet, Amazon.com Inc. /zigman2/quotes/210331248/composite AMZN +2.17%  , and Facebook — that are under scrutiny from a phalanx of investigative bodies over their business practices and vast influence in multiple markets. Antitrust experts jokingly refer to those under investigation as GAFA.

More important, the circular firing squad could portend a slew of forthcoming actions on the antitrust front: The Justice Department is expected to bring charges against Google as early as this month, a person familiar with the investigation told MarketWatch. The House Judiciary Committee’s antitrust subcommittee, meanwhile, could issue a report this month on its recommendations following its July 29 hearing on Big Tech, two people close to the situation told MarketWatch.

Fueling the acrimony is genuine concern from the far-right to the far-left. “Big Tech is big oil. It is a bipartisan issue,” Anurag Chandra, a partner at venture-capital firm Fort Ross Ventures, told MarketWatch. “These guys have gotten massive. We have to get involved with public policy over privacy and use of personal data.”

“Google and Amazon would seem to be first in line for actions,” he added. “They create and operate forums, and then compete in them. By putting their thumbs on the scale, that sounds like grounds for antitrust actions.”

Fueling the accelerated timetable is the increasing willingness among smaller companies to speak up against the Big Four.

“You will also see non-GAFA companies air their grievances more publicly because they aren’t in danger of being punished with so much attention on their business practices,” said Joel Mitnick, a former FTC trial lawyer who specializes in antitrust and global litigation. “It is out in the ether now. What is more important is the entire regulatory machinery around the world is gearing up against the Big Four. The infighting is background noise.”