Boeing shares have enjoyed a 90% gain in 2017, while venerable blue chip GE has languished

The FAANG stocks — Facebook Inc., Apple Inc., Amazon.com Inc., Netflix Inc. and Google parent Alphabet Inc., which have all generated a lot of buzz this year — can take a seat in coach class because the biggest gainer on the Dow Jones Industrial Average this year has outperformed the lot, even though it isn’t a Silicon Valley darling but an old-economy company with origins dating back to 1916.

Boeing Co. (NYS:BA) , the commercial airliner maker and defense contractor, enjoyed an 89.4% surge in its stock price in 2017, leaving the next biggest gainer, fellow old-economy company Caterpillar Inc. (NYS:CAT) , in the dust with a mere 69.9% gain.

Despite a struggle of late, Apple (NAS:AAPL) took fourth place with a 46.1% gain after Visa Inc. (NYS:V) barely surpassed it on the last trading day of the year. Those two were followed by Wal-Mart Stores Inc. (NYS:WMT) , McDonald’s Corp. (NYS:MCD)   and Home Depot Inc. (NYS:HD) , which all climbed more than 41%.

As the chart shows, Boeing’s stock climbed consistently through the year to notch a series of records, buoyed by better-than-expected earnings, including a second-quarter report that so impressed investors it sent the stock up almost 10% in a single session.

Boeing topped consensus expectations for a sixth consecutive quarter when it reported third-quarter earnings in October, after delivering a record 202 commercial airliners. Its backlog stood at 5,659 aircraft at the end of September, equal to about six years of deliveries.

The company raised its full-year guidance and in December announced new shareholder-friendly actions, including a higher dividend and a stock-buyback program valued at up to $18 billion.

Read: Share-buyback machine now in overdrive — dropping a strong hint at what CEOs plan to do with tax savings

Boeing has benefited from the current upswing in aircraft demand, driven by increased air-passenger demand in Asia where discount carriers are busy increasing capacity. The company has also been boosted by cost-cutting measures, introduced by Chief Executive Dennis Muilenburg, that have propped up margins.

The company has high hopes for its new global services division, which includes crucial aftermarket services for its airline customers, and is expected to generate $50 billion in revenue within five to 10 years.

Meanwhile, increased military spending against a rocky geopolitical backdrop has provided another boost, as has the tax bill that President Donald Trump signed into law on Dec. 22. Trump’s antitrade rhetoric during his campaign and in the early days of his presidency had raised concerns at Boeing, as had his threat to shutter the Export-Import Bank, a lender to Boeing customers that is sometimes called “Boeing’s Bank.”

Don’t miss: Here’s what all 30 companies that make up the Dow industrials think about the tax cuts

Trump has since reversed his stance on those policies, and even visited the company’s South Carolina plant in February to “celebrate jobs.” Boeing is now in takeover talks with Brazilian aircraft maker Embraer SA (BSP:BR:EMBR3) , the largest maker of regional jets, a move that would boost its competitive edge on rival Airbus, which recently announced a similar deal to buy a majority stake in a jetliner program run by Canada’s Bombardier (TSE:CA:BBD.B) , as The Wall Street Journal has reported. 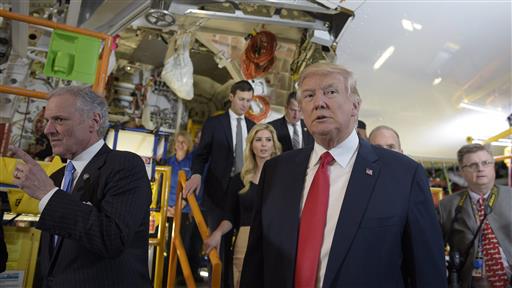 Ten best performers on the Dow Jones Industrial Average in 2017

On the other end of the spectrum is another old-economy company, General Electric Co. (NYS:GE)  , which ended an annus horribilis down nearly 45%, after tumbling 17% in October alone to mark its worst one-month selloff since the depths of the Great Recession. Investors appeared unimpressed by new CEO John Flannery’s turnaround plan unveiled in November, sending the stock down another 9%.

GE’s stock was already on a downtrend on Aug. 1, when the company announced the sudden departure of then–Chief Executive Jeffry Immelt after a 16-year run at the top. Immelt had worked to reshape the company in the wake of the 2008 financial crisis by jettisoning its financial arm to refocus on core industrial business lines.

Immelt fought aggressively to make the company more digital, hiring hundreds of software engineers and moving the company’s headquarters to Massachusetts from Connecticut to be closer to talent emerging from that state’s highly regarded universities. But the company’s stock failed to respond to his strategic moves and was the worst Dow performer during his tenure.

Also: GE credit downgraded at Moody’s because of ‘severe deterioration’ of finances

Flannery has placed stock performance at the center of his transformation plan, which includes a shrinking of the company’s portfolio of businesses, a focus on cash generation and returns and cost cuts.

Read on: GE’s stock falls toward Fibonacci support level as charts suggest worst may be over

Ten worst performers on the Dow Jones Industrial Average in 2017