Bitcoin busted through the $8,000 barrier over the weekend and extended gains Monday, seemingly buoyed by continued expectations for a pickup in institutional interest as enthusiasts brushed off detractors who see a dangerous market bubble. 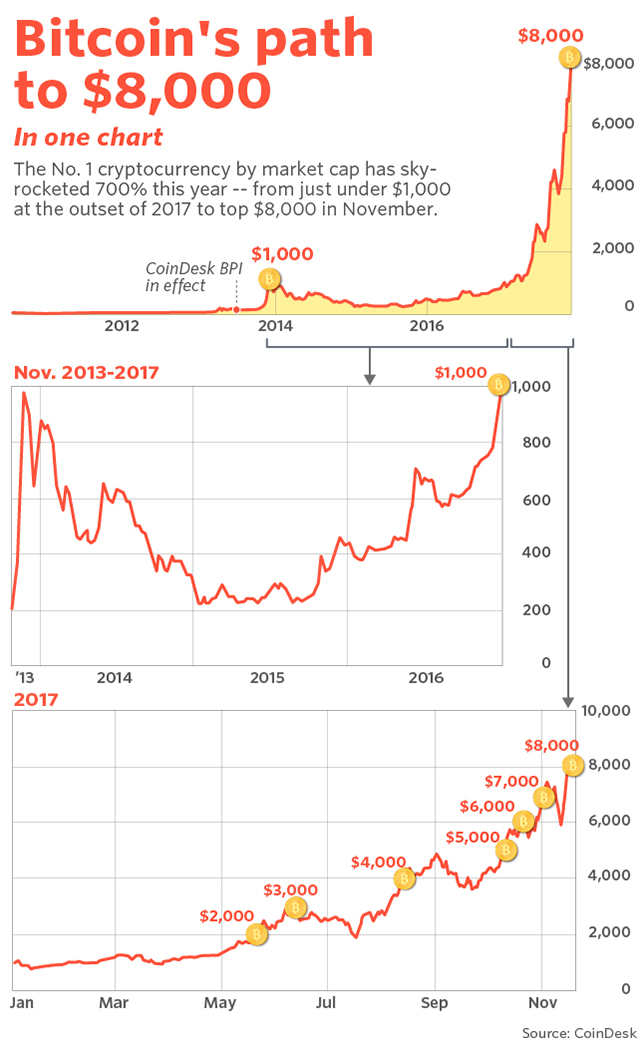 The cryptocurrency ended last week with a 17% gain, extending a rebound from its four-day plunge logged earlier this month. It traded briefly below $6,000 as recently as Nov. 12, retreating on the suspension of a software upgrade known as Segwit2X due to opposition by other developers. The technology change would have approximately doubled the processing capacity of the underlying network.

Read: How the rip for bitcoin may be nearing tulip-mania levels

Analysts have credited the latest rebound in part to enthusiasm from institutional investors, including the announcement of plans for CME bitcoin futures.

In a post on its website, CME Group Inc. /zigman2/quotes/210449693/composite CME +1.50% , the world’s largest futures exchange, said it plans to launch a contract in the fourth quarter “pending all relevant regulatory review periods.” An earlier post had said trading would begin on Dec. 11. The CME didn’t immediately respond to a request for comment. Reuters reported that a CME spokeswoman said the earlier notice was posted in error.

Fevered trading in bitcoin and other digital currencies has sparked warnings of a potential bubble. Yale economics professor and Nobel Prize winner Robert Shiller, who wrote “Irrational Exuberance,” a best-selling book on market manias, told Quartz in September that bitcoin was the “best example right now” of a market bubble.

Ray Dalio, founder of Bridgewater Associates, the world’s largest hedge fund, said in September that cryptocurrencies like bitcoin meet his firm’s criteria for a market bubble.

Read: A list of what Wall Street CEOs have said about bitcoin

William Watts is MarketWatch's deputy markets editor, based in New York. Follow him on Twitter @wlwatts. Rachel Koning Beals is a MarketWatch news editor in Chicago.