Visa, Procter & Gamble, and Chevron are the latest bellwethers to be smaller than the digital currency 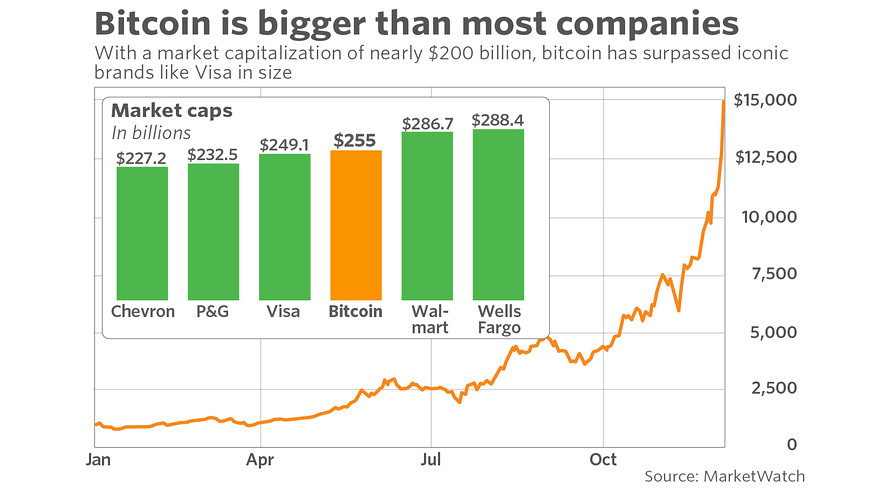 One by one, major companies are falling behind bitcoin in size, as the digital currency’s massive price appreciation this year has made it larger than some of the oldest stocks and most famous brands in the world.

Read: Bitcoin lays waste to a year’s worth of ‘bubble’ calls on its way to new highs

Related: Here’s how fast bitcoin is taking out $1,000 milestones

At current levels, bitcoin has a market capitalization of $255 billion, according to pricing website CoinMarketCap. That means it is more than double the level it hit in just October, an astonishing rise that makes it larger than the vast majority of S&P 500 (S&P:SPX)  components—an equity index comprised of the largest U.S. companies.

The total market capitalization of all cryptocurrencies is $404.4 billion.

Learn more: Bitcoin makes up more than half the total cryptocurrency market. Here’s the rest

At its current levels, bitcoin has nearly cracked the top 10 largest S&P 500 companies, an accomplishment that would’ve been unthinkable even a year ago, when it was valued at well under $50 billion.

Don’t miss: Here’s how Amazon may be a $1 trillion company in a year