Coronavirus costs the U.S. 20.5 million jobs in April as unemployment soars to 14.7% 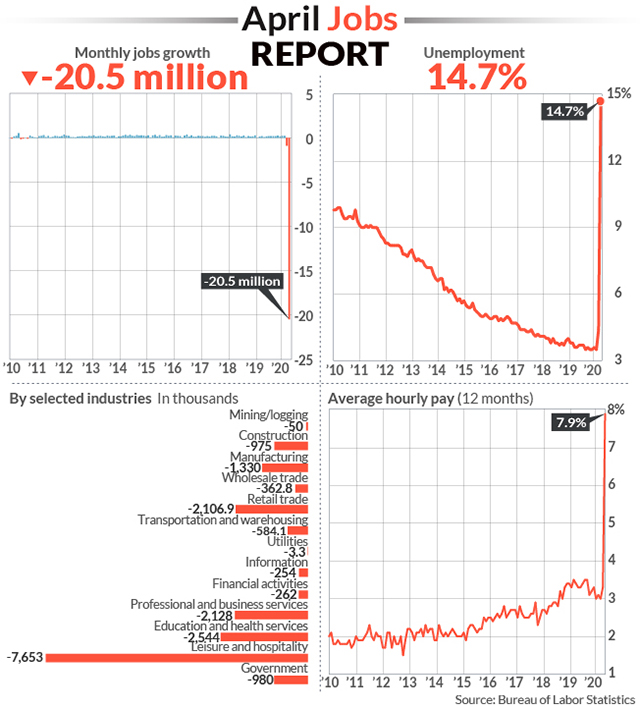 The numbers: The coronavirus pandemic destroyed 20.5 million U.S. jobs in April, driving the unemployment rate to a post Word War Two high of 14.7% as the country faced its biggest economic crisis in almost a century.

The trail of job losses was heaviest at restaurants, retailers and hotels, but every major industry suffered. The health-care sector even lost nearly 1.5 million jobs amid the worst health crisis in American history, according to the Labor Department data released Friday morning.

The unemployment rate leaped to 14.7% from a 50-year low of just 3.5% two months ago, but the share of idled workers is much higher.

If millions of Americans who have been furloughed and expect to return to their jobs are counted, the Bureau of Labor Statistics said the jobless rate would have almost 5 percentage points higher at nearly 20%.

A broader measure of unemployment that includes discouraged job seekers and other people on the fringes of the labor market skyrocketed to a record 22.8% in April, painting an even grimmer picture.

In seven weeks since the virus shut down much of the U.S. economy, more than 33 million people have applied for unemployment benefits. The numbers are still growing by several million a week.

Read: Jobless claims jump 3.2 million in early May, but historic rate of layoffs is slowing

A smattering of people have been returning to work over the past few weeks as states slowly reopen their economies, but not enough to put an appreciable dent in record unemployment.

Before the April employment report was published, premarket trading pointed to a higher opening for the U.S. stock market as the loss of jobs was a bit less the 22.1 million forecast of economists surveyed by MarketWatch. 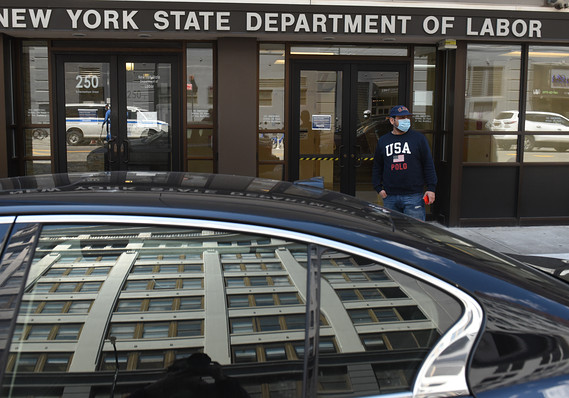 Getty Images
Tens of millions of workers have lost their jobs during the coronavirus pandemic.

What happened: Hotels and restaurants were ravaged by fear of the virus and the resulting shutdowns. They cut 7.6 million jobs, at least temporarily, as Americans stayed home.

Most retailers were also slammed, especially those without a strong online presence, as walk-in traffic dried up. Retail employment fell by 2.1 million.

The health-care industry, where employment has been growing for decades, was a surprising victim as well. Nearly 1.5 million jobs in the medical profession were scrubbed as dental and doctor offices closed, patients avoided hospitals and elective procedures were put off.

In an odd quirk, the average of amount of money workers earn per hour surged by $1.34 to $30.01. The 4.7% spike reflects a greater percentage of job losses among lower-wage workers than higher-earning ones pushing up the average. The pandemic has been especially harmful to Americans of modest means, particularly those who work in service-oriented industries.