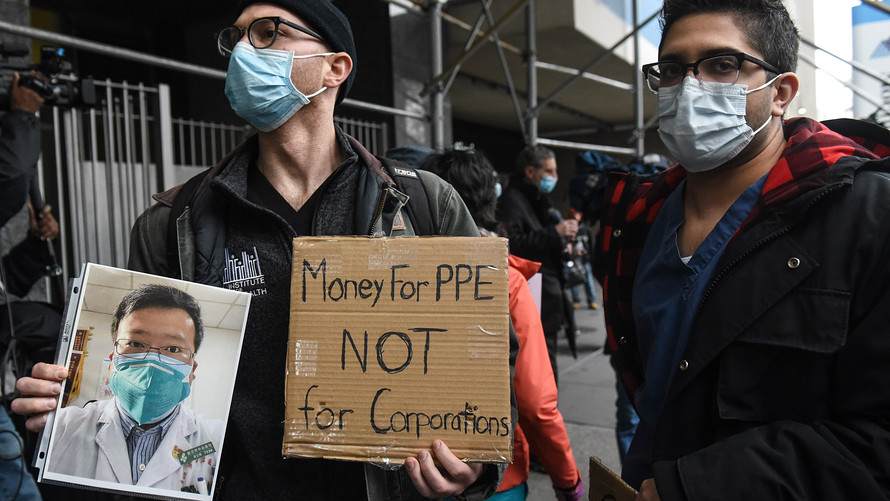 The U.S. labor market showed further signs of damage from the coronavirus that causes COVID-19 on Friday as the global case tally extended beyond a million and the death toll passed 55,000.

Nearly four billion people around the world are now under some order restricting their movements, according to a New York Times tally.

Dr. Anthony Fauci, the infectious disease expert who is a key member of the Task Force created to handle the pandemic, told a CNN panel that he can’t understand why there is still no U.S.-wide stay-at-home order. Only 40 states so far have introduced restrictions with the severity varying state by state.

President Donald Trump has resisted the calls for a nationwide lockdown, putting him at odds with public health experts, as well as billionaire philanthropist Bill Gates.

In Europe, Spain overtook Italy in the number of cases even after it recorded its first decline in daily fatalities, while Germany’s tally moved past official numbers provided by China.

In the U.S., states are still clamoring for basic equipment, including face masks, gowns and gloves.

President Donald Trump invoked the Defense Production Act to shore up supplies of face masks and slammed manufacturer 3M /zigman2/quotes/205029460/composite MMM -1.55%  for failing to keep up with demand after the company’s Chief Executive said the surge was exceeding its production capacity. 3M has doubled mask production since January and said Friday it looked forward to working with the Federal Emergency Management Agency (FEMA) on stepping up production.

The company pushed back against the administration’s request that it stop exporting respirators that are made in the U.S. to Latin America and Canada, given they are in such short supply. The company said it is a vital supplier of that equipment in those markets and that there are “significant humanitarian implications” to such a move.

“Ceasing all export of respirators produced in the United States would likely cause other countries to retaliate and do the same, as some have already done,” the company said in a statement. “If that were to occur, the net number of respirators being made available to the United States would actually decrease. That is the opposite of what we and the Administration, on behalf of the American people, both seek.”

The U.S. case tally climbed to 257,773 on Friday with at least 6,585 deaths, according to data aggregated by the Center for Systems Science and Engineering at Johns Hopkins University. Another 9,311 people have recovered. The U.S. continues to lead the world in the number of cases, with New York the epicenter of the outbreak.

The number of cases in New York state rose to 102,863 on Friday, according to Gov. Andrew Cuomo. There were 10,842 new cases overnight, roughly half of which were based in New York City. The city’s case toll now stands at 57,159, according to Cuomo.

The U.S. March jobs report found 701,000 jobs were lost in the month in data that was based on a survey conducted before the pandemic really kicked in. The real losses were much higher, at least 10 million jobs, based on a separate survey of households.