Bulletin The dangerous Delta variant of COVID is now in 74 countries, WHO says »
Investor Alert

Coronavirus update: U.S. death toll tops 225,000 and Trump’s chief of staff says U.S. is ‘not going to control the pandemic’ 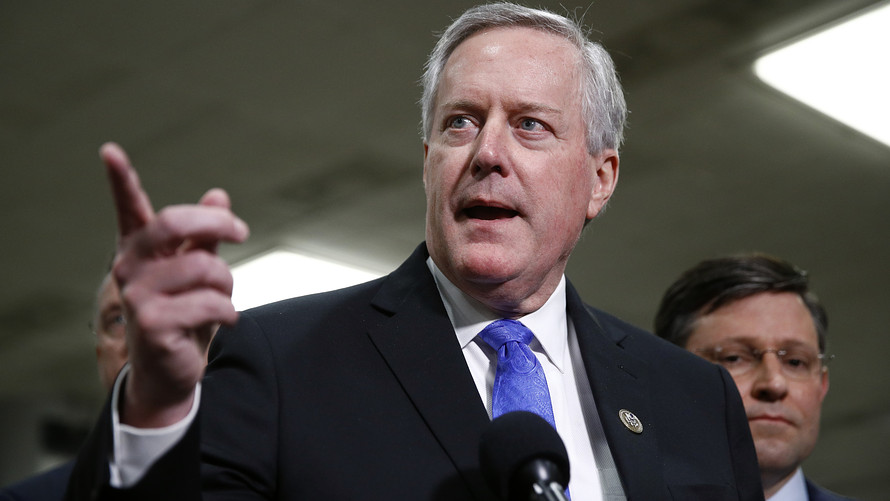 The U.S. death toll from the coronavirus illness COVID-19 rose above 225,000 on Monday, with more than 20 states reaching record levels of new infections, and President Donald Trump’s chief of staff said the U.S. is “not going to control the pandemic.”

Mark Meadows, in a heated exchange on CNN on Sunday, said the U.S. would not be able to control the spread, “because it is a contagious virus just like the flu.”

The White House would instead “control the fact that we get vaccines, therapeutics and other mitigation areas.” Vaccine makers have said they do not expect to have a vaccine ready for regulatory scrutiny any time soon, as clinical trials are still ongoing.

Meadows made the comments while defending Vice President Mike Pence’s decision to continue live campaigning after five of his aides tested positive for COVID-19. Pence, who chairs the White House Task Force created to manage the pandemic, has been in close contact with some of those aides, including his chief of staff, Marc Short, but his spokesman Devin O’Malley said Pence tested negative for the virus on Saturday and Sunday. Pence flew to North Carolina on Sunday for a rally.

Trump’s presidential opponent, Democrat Joe Biden, said Meadows’ comments were an admission that the Trump administration has failed to manage the crisis.

“This wasn’t a slip by Meadows; it was a candid acknowledgment of what President Trump’s strategy has clearly been from the beginning of this crisis: to wave the white flag of defeat and hope that by ignoring it, the virus would simply go away,” Biden said in a statement. “It hasn’t, and it won’t.”

‘While it has been apparent that the White House had not been focused on ending the spread (the back and forth on mask-wearing as one example); we are surprised slightly more than a week before the election where the president is underperforming with seniors because of the government’s response to the pandemic, that they would say that the policy of the U.S. is not to control the pandemic and instead focus on therapeutic and vaccine development,” they wrote in a note to clients. ‘This week, all the metrics we track are concerning and things are likely only going to get worse before they get better.”

Hospitals in rural and isolated areas are filling rapidly. There are currently 41,753 COVID-19 patients in U.S. hospitals, according to the COVID Tracking Project and 8,488 are in intensive care units. A month ago, there were fewer than 30,000 hospitalized patients.

The virus is accelerating at the fastest pace in the Midwest and Mountain West, led by the Dakotas. In some areas, patients are being sent to other states and non-COVID related procedures are being postponed.

The problem in rural areas is exacerbated by the fact that so many hospitals in remote areas have shut down in recent years. Since 2005, 174 rural hospitals in the U.S. have closed, according to the Cecil G. Sheps Center for Health Services Research, a unit of the University of North Carolina that tracks the data. Since 2010, 132 rural hospitals have closed, the data shows.

“Many rural hospitals and primary care practices entered the pandemic in financial trouble and chronically short-staffed,” according to Lauren Hughes and Roberto Silva, both associate professors of family medicine at the University of Colorado Anschutz Medical Campus in Denver.

“They reside squarely at the end of the supply chain, making acquisition of needed personal protective equipment and testing supplies difficult. Rural hospitals have fewer ICU beds per capita than their urban counterparts,” the two doctors wrote in The Conversation.

The politicization of public safety measures is also taking a toll, they wrote.

“That resentment toward public health recommendations, including mask-wearing, is now on a crash course with rising case numbers in the Mountain West, Midwest and Great Plains. For the fifth week in a row, rural counties witnessed a sharp increase in cases, to the point where over 70% of the nation’s nonmetropolitan counties had earned a “red zone” designation, suggesting local viral spread was out of control.

“The reality, though, is COVID-19 has never been “under control” in the U.S.,” the doctors wrote.

• El Paso has imposed a curfew on all residents after intensive care units reached full capacity, the Washington Post reported. Cold weather has led to a surge of infections that are now overwhelming the health-care system, and residents are being asked to stay at home and makeshift field hospitals are being opened.

• Utah’s hospital association has warned that it may have to ration care if trends don’t improve, the Washington Post reported. “It’s an extreme situation, because this means that all your contingency planning has been exhausted,” Greg Bell, president of the Utah Hospital Association, told the paper.

• Germany is on the verge of losing control of the virus, according to Chancellor Angela Merkel, who has told her Christian Democratic Party “the situation is threatening” and “every day counts,” the Guardian reported. Merkel is scheduled to hold a meeting with the leaders of Germany’s 16 states on Friday, and is expected to announce nationwide restrictions. Merkel said at the weekend that though the number of new infections is rising, “we are not powerless against the virus,” and what every German can and should do: reduce contacts, she said. Germany has 443,189 confirmed COVID-19 cases, according to data aggregated by Johns Hopkins University, and at least 10,062 Germans have died.

• Australia’s lockdown and social distancing to combat the spread of COVID-19 also saved the lives of about 400 people who would have been expected to die in June from respiratory illnesses such as pneumonia, Reuters reported, citing a research paper from the Actuaries Institute. The paper found a shortfall between verified deaths and the number expected in June, which is part of Australia’s winter. Australia in March shut large parts of its economy, limited the number of people allowed to gather together and shut its international borders to slow the spread of the virus. Australia has 27,527 confirmed cases and 905 fatalities, according to the Johns Hopkins data.

• China is testing millions of people in the region of Xinjiang and has imposed lockdown measures in the prefecture of Kashgar after a single asymptomatic case was detected on Saturday, CNN reported. The tests have so far found 137 additional asymptomatic cases, the highest daily number counted in China for nearly seven months. The Chinese government is expecting to complete testing all 4.7 million residents of Kashgar by Tuesday.

The number of confirmed cases of COVID-19 world-wide now stands at 43.2 million, Johns Hopkins data shows, and the death toll is 1.16 million. At least 29 million people have recovered from COVID-19.

The U.S. has the highest case tally at 8.7 million and the highest death toll at 225,379, or about a fifth of the global total.

China, where the disease was first reported late last year, has 91,151 cases and 4,739 fatalities, according to its official numbers.

AstraZeneca PLC (NAS:AZN)   (LON:UK:AZN)  said its experimental COVID-19 vaccine had produced an immune response in both older adults, the age group at highest risk from the virus, as well as younger adults, in the Phase 2 study, MarketWatch's Lina Saigol reported.

The potential vaccine, AZD1222, which is being developed in collaboration with the University of Oxford, triggers protective antibodies and T-cells in older age groups.

“It is encouraging to see immunogenicity responses were similar between older and younger adults and that reactogenicity was lower in older adults, where the COVID-19 disease severity is higher. The results further build the body of evidence for the safety and immunogenicity of AZD1222,” said a spokesperson for the drugmaker.

The interim results further build on preliminary data from the Phase 1 and 2 clinical trials published in July in the medical journal The Lancet. The trial, which involved 1,077 healthy participants aged 18 to 55, showed that the vaccine induced two forms of human immune response generating antibodies and T-cells — for at least 56 days.

Separately, the U.S. Food and Drug Administration said AstraZeneca can resume the Phase 3 trial it was conducting in the U.S., which was temporarily put on hold over concern about an unexplained illness, the Wall Street Journal reported.

• HCA Healthcare Inc. (NYS:HCA) reported a third-quarter profit that came up short of expectations, while revenue rose above forecasts despite a drop in same-facility admissions during the pandemic. Net income rose to $668 million, or $1.95 a share, from $612 million, or $1.76 a share, in the year-ago period. the company said the results include a reversal of $822 million, or $1.72 a share, in government stimulus income recorded in the sequential second quarter. The FactSet consensus for earnings per share was $2.32, and the consensus for net EPS was $2.61. Revenue increased 4.9% to $13.31 billion, above the FactSet consensus of $12.90 billion. Same-facility admissions declined 3.8% and equivalent admissions fell 9.0%, as same-facility emergency room visits dropped 20.3% and same-facility inpatient surgeries declined 6.8%. Meanwhile, same-facility revenue per equivalent admission increased 14.8%, due to increases in acuity of patients treated and favorable payer mix.

• XpresSpa Group Inc. (NAS:XSPA) is expanding its airport testing service beyond COVID-19 to include rapid tests for such diseases as flu, mononucleosis and group A streptococcus. The company’s stores are a popular fixture in airports, and will also offer this season’s flu vaccine, as well as a quadrivalent high-dose flu vaccine that is recommended for seniors. “This pandemic is prompting people to change the way they think about their health when traveling, paving the way for this new industry segment in a post COVID-19 world,” Chief Executive Doug Satzman said in a statement. XpreSpa is currently offering travelers a series of testing options for the coronavirus, including a rapid molecular COVID-19 test, the Polymerase Chain Reaction (PCR) Test, and the Blood Antibody Test. The services are also available to all airport workers, including border and customs agents and TSA workers.